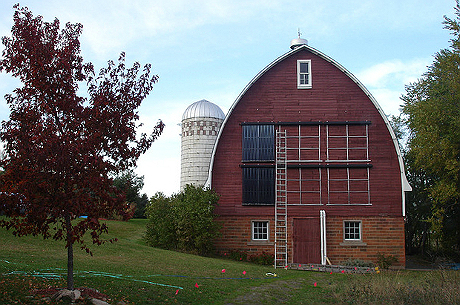 A solar thermal system is installed on a Minnesota barn in 2008. (Photo by Clean Energy Resource Teams via Creative Commons)

The state’s Department of Commerce has enough rebate money left over to fund dozens more solar hot water or solar thermal projects through its Made in Minnesota (MiM) program. Meanwhile, a much larger pool of money for PV has been exhausted.

Although the deadline for rebates has formally passed, MiM’s coordinator Kim Havey said the department has extended the program until the end of the year. Solar thermal could be particularly attractive to rural customers using propane, which may be in short supply again this winter.

“Solar thermal can really be a complement to propane,” he said, noting that animal barns often require high indoor temperatures. “We’d love to see that promoted more, and because they are commercial projects we can fund up to $25,000 for a turkey barn for a solar thermal hot air installation.”

But turkey farmers aren’t the only potential clients. MiM has approximately $120,000 remaining for 2014, enough to do 48 residential projects, 24 multifamily projects or about five commercial projects, he said, or a mix of all of them.

The MiM solar component only provides the subsidy for systems manufactured in the state, among them those made by the Rural Renewable Energy Alliance, (RREA) Solar Skies and Energy Conservation & Services.

Solar thermal could serve as a backfill in case of a propane shortage this winter, which Edens believes is likely due to closure of a major pipeline last year, despite assurances from suppliers that they’ll have enough to go around.

Thermal solar’s annual $250,000 MiM incentive budget is but a sliver of the program that awards homeowners and businesses $15 million annually for 10 years for using domestically made PV panels.

The solar thermal incentive program offers homeowners and businesses a 25 percent rebate for the cost of installation up to $2,500 for residential installations, $5,000 for multi-family dwellings and $25,000 for commercial projects.

What prompted the popularity of PV is simply the higher interest in solar electric in general, plummeting panel costs and an attractive incentive for buyers, Havey said. In the MiM PV program consumers and businesses receive more than the standard rate for the electricity they generate, enough to pay for 40 percent of the cost of an installation.

Silicon Energy and tenKsolar are the only Minnesota PV producers at this time, though Havey said at least two other PV companies are in the certification process. Another solar thermal company is also considering an entry into MiM.

“Most people when they think about solar these days think about photovoltaic,” Edens said. “When we started in 2000 it was the other way around, but now it’s a reversal. Simple awareness is part of the challenge, as well as the fact natural gas is so inexpensive people don’t see the long-term value of solar thermal.”

Another challenge is that MiM covers only businesses and consumers in investor-owned markets while high energy prices are being felt in rural markets.

“It’s not congruent with where there’s a high dependence on propane and fuel oil,” he said. “If it did, it would be consumed much more quickly.”

Were the market to broaden to include areas served by co-ops, the sales of solar thermal would rise, especially if propane prices continue to stay high, said Randy Hagen, CEO and founder of Solar Skies in Alexandria.

But barring such a change in policy by the state legislature, he believes MiM’s focus on PV inevitably hurts solar thermal’s chances with installers and consumers. And the installer industry in general is focused more intensely on PV.

Solar firms “are going to be installing where there is a good return and the solar photovoltaic program is where you would want to spend your time,” he said. “The momentum has not been toward solar thermal. We don’t have a big lobby for the industry.”

“If we had equity in solar technology it would move the whole solar industry forward and solar thermal would flourish,” Hagen said.

Yet that kind of change is unlikely since the program is paid for by money the state collects from investor-owned utilities. As it is currently configured, the program basically benefits the utilities that help pay for it.

With solar thermal sales flat-lining Solar Skies has worked to expand product offerings, improve modules and invest in new production technology, he said. Most of Solar Skies’ sales have been in other states this year, with many projects occurring in the Northeast and in Maryland, where a renewable energy standard and subsidies for solar thermal have created a strong market, Hagen noted.

In Minnesota sales may have slowed but Solar Skies has had a play in significant projects, selling 48 solar thermal collectors to a $22 million addition to Bielenberg Sports Center in Woodbury and 26 panels to two facilities on the Camp Ripley military campus north of Little Falls. The company’s largest project, 165 collectors, can be found at Minneapolis-St. Paul International Airport.

A closer look at solar thermal

At the residential level a solar air system costs around $7,000 before the 30 percent tax credit and MiM subsidy kicks in, Edens said. The system can provide roughly 20 percent of the heat a home needs. It uses forced air to deliver heat to a home until a prescribed temperature — such as 68 degrees — is reached.

A solar water heating system costs around $10,000 and delivers heat to a “solar storage” tank that warms water to 120 to 140 degrees, Edens said. That water goes into a natural gas tank that does not turn on because the liquid is already warm enough.

Both systems produce the same amount of energy but solar water heaters can cover 50 to 80 percent of a typical home’s needs, Edens said.

“Water heating loads for a typical Minnesota home are smaller than your space heating load,” he said. Space heating only offers 20 percent of the heating needs, typically, in a home because warming space is the largest energy load in a cold climate.

While RREA manufactures and installs solar thermal commercially it also has created a focused approach on assisting low-income communities.

Low income communities “are the most gravely affected by the volatility of energy costs,” he said. “If you’re on a fixed income or a single parent with a gaggle of kids and propane goes up five percent you can easily find yourself living in fuel poverty.”

Helping the poor is one of RREA’s central missions. The company has hired staff members who were recipients of its services in the past. Money earned by the non-profit gets plowed back into affordable housing projects.

“That’s our unique position, we’re organized as a nonprofit and we do a lot of work on behalf of low income communities,” he said.