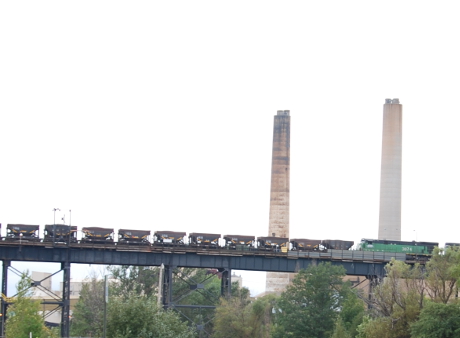 Editor’s note: This is the second in a series of stories leading up to the U.P. Energy Summit on Oct. 28.

What started in 2008 as one lawmaker’s intent to retain mining jobs in his Upper Peninsula community has evolved into a flashpoint of controversy that some say has jeopardized that very region’s energy future.

Mike Prusi represented several counties throughout the U.P. in the state legislature from 1995 to 2010 and served his last year as Senate Minority Leader. In 2008, he was able to get a specific provision inserted into Michigan’s energy choice law — which caps choice for customers at 10 percent of a utility’s load — that exempts U.P. iron ore mining or processing facilities.

It was a clear exemption for a major company he, his family and friends had worked for over generations.

Prusi said in an interview with Midwest Energy News that the local economic impact of Cliffs Natural Resources showed how important it was to keep the company there.

Then-Gov. Jennifer Granholm signed Michigan’s new energy choice law at a time when the mining company’s energy costs from We Energies at the Presque Isle Power Plant were steadily increasing. Between 2006 and 2011, the company says its energy costs rose 110 percent.

Prusi also felt the mines were at a disadvantage without the provision because the mines made up nearly 85 percent of Presque Isle’s load, which he said would have barred them from participating in choice, even though Cliffs makes up less than 10 percent of all of We Energies’ total portfolio in Michigan and Wisconsin. Downstate industrial users didn’t face such barriers, he said.

“The legislature recognized that companies should not be penalized simply because they are served by an out-of-state utility,” a Cliffs spokesman said in an email.

“I believed then and I believe today that [Cliffs] suffering a 110 percent increase in power costs is very detrimental to maintain those operations,” Prusi said. “With rate increases in that amount over five years, I think it was pretty justified to give Cliffs the option for a more reasonable rate. Why should big, industrial customers be disadvantaged when other major businesses around the state were allowed to shop for power?”

Would he do it over again? “Oh, certainly,” Prusi said.

For others, hindsight tells a different story.

Multiple legislators and experts interviewed for this story single out the provision as the starting point that set off a series of disputes before the Federal Energy Regulatory Commission and a reliability scenario that could burden ratepayers across the U.P. who don’t benefit from the mines.

State Rep. John Kivela, who represents Marquette, said that the mine exemption “has absolutely backfired on us. That’s what has caused all of this big issue to come to the forefront: When We Energies lost its biggest customer, it started looking at other options.”

State Rep. Scott Dianda, from the Keweenaw Peninsula, added that the choice exemption was “the biggest catalyst to this whole issue. I don’t think people really were aware of it [in 2008] and how it would change things.”

Cliffs spokesman Dale Himmela argues that We Energies was considering closing Presque Isle in October 2011, nearly two years before Cliffs exercised its choice. In a recent op-ed in the Marquette Mining Journal, Himmela also accused We Energies of a lack of planning and investment in its U.P. (and only Michigan) operation, which the mining company originally built in 1955 and later sold.

Kivela sees it another way: “[We Energies was] making waves prior to this, but it wasn’t terminal. This exercising choice terminated the power plant.”

As for the economic impact argument, Kivela said: “At the time, you could say that it was good news for the U.P. because it put the iron mines in a position to be competitive, to continue to operate and to be a good partner with the community. When they exercised that option, it really just threw everything out the window.”

While he credits Prusi for trying to help the area and said Prusi did it “for all the right reasons,” he said looking back that it was a “mistake. It’s one of those instances when hindsight is 20/20. I don’t want to throw Mike under the bus — he did what every representative would want to do: fight for business in his district.”

Prusi doesn’t recall much opposition to the exemption, except from We Energies, who “absolutely adamantly opposed it. … There was some opposition, but not enough to strip the amendment or really have anyone in the legislature too concerned.”

Prusi, a third-generation iron-ore miner, worked for Cliffs for over 20 years before getting elected and now consults for the company. He said his experience benefited him in the legislature. He also was a union negotiator, which at times put him at odds with company management, he said.

“At that time, 1,800 to 2,000 people depended on Cliffs for a job in the district,” he said. “I felt absolutely no conflict of interest despite my 20-year history as an employee.”

Steve Transeth, an attorney, spokesman for the Michigan Jobs & Energy Coalition and a Michigan Public Service commissioner when the choice law took effect in 2008, said what’s happening in the U.P. is a “really great case study of what we’re looking at in terms of deregulation and the impact that it can have on customers.”

Cliffs continues to draw power from Presque Isle but it’s not paying We Energies for it. The utility is being reimbursed through a System Support Resource payment, which by the end of the year could reach $100 million annually and be paid by We Energies’ U.P. customers. The Michigan Public Service Commission estimates that residential customers could see their bills increase by $12 to $13 a month.

“It basically forces the socializing of those rates across a larger body of ratepayers to continue to maintain and keep those plants up and running that are necessary for the system,” Transeth said. “It results in ratepayers paying for it who are not receiving any benefits.”

Payment allocation among customers has set off a series of contested cases with FERC.

“It all began with the mine’s departure with choice,” said MPSC spokeswoman Judy Palnau.

Transeth, when he was legal counsel and lead drafter for the state Legislature, literally wrote Michigan’s original deregulation law that took effect in 2000. There was no cap on choice initially. However, he said the program only saw about 3 percent participation throughout the state because of the high cost of wholesale energy prices.

“They’re going to continue operating regardless. We’re talking about the difference between paying their fair share for electricity they are receiving.”

U.S. Rep. Dan Benishek, who represents the U.P., joined the fray when he announced in a statement last week that FERC should side with U.P. ratepayers on cost allocation:

“The proposed increases and the process in which this is occurring is simply unacceptable. Families, schools, businesses — basically anyone who lives and works in the U.P. could be looking at a big rate increase as soon as December 1, without gaining any sort of benefit. FERC must be willing to address this issue in a manner that is fair and recognizes historical precedent and agreements regarding the shared responsibility among energy consumers in an entire system.”

He also suggested the need for a long-term solution, which Palnau, of the MPSC, said — and while speaking for the Governor’s office — should include a mix of new generation.

To that, Prusi agrees new generation is “imperative … if we want to maintain the economy or grow the economy.”