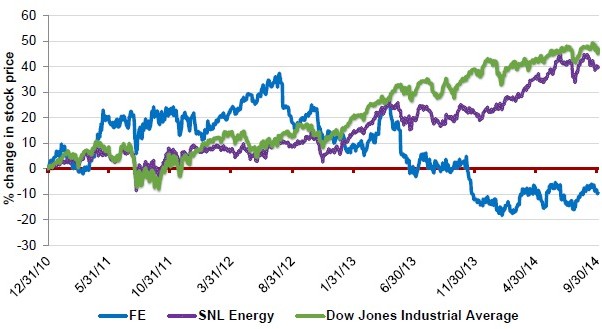 FirstEnergy’s effort to get Ohio consumers to subsidize noncompetitive power plants is short-sighted and won’t guarantee long-term financial health, according to a new report.

That’s because FirstEnergy continues to center its business around coal, instead of adapting to competition, changing markets and newer technologies, says the report, released last week by the Institute for Energy Economics and Financial Analysis (IEEFA).

FirstEnergy rejects the report, which it calls “misleading and biased.”

FirstEnergy’s generating capacity relies heavily on coal, with two-thirds of its 2013 generation coming from coal plants, reports the Cleveland-based IEEFA. Reducing coal dependence is part of the organization’s mission.

“With an aging coal fleet, low natural gas prices driving down power prices, weak electric demand growth, and increasing penetration of energy efficiency and renewable energy, this has not been a winning strategy,” said the report.

Under a law passed 15 years ago, Ohio’s electricity generation providers are no longer regulated and must compete with each other.

“The market for coal in deregulated markets is not good,” stressed co-author Cathy Kunkel.

That competition has caused some of the more forward-thinking energy companies “to rethink their whole business model,” Kunkel said. She gave NRG Energy as an example.

FirstEnergy also “has a lot of debt that’s not going away,” Kunkel added. The company has a lower credit rating than other energy companies of similar size, the report noted.

Moreover, FirstEnergy’s stock performance has lagged behind other companies. A graph in the IEEFA report shows FirstEnergy underperforming relative to indices for the energy and industrial sectors.

“This company is struggling financially,” Kunkel stressed. “To cope with that situation, they’ve been relying on a lot of stop-gap financial tricks and things that have been harmful to ratepayers.”

Among other things, FirstEnergy fought against Ohio’s renewable energy and energy efficiency standards. The Ohio legislature rewarded those efforts by passing Senate Bill 310, which temporarily freezes and substantially modifies those standards.

The plants would sell all their electricity to the regulated utilities, which would then resell it on the market as the plants would normally do. Any difference between the market price and contract price would be charged or credited to all distribution customers.

In Kunkel’s eyes, the plan is a subsidy.

“Ohio is a deregulated state, which means that the cost of power that you pay for is supposed to reflect the market price,” Kunkel explained. “FirstEnergy is basically going around that and saying, ‘No, you just pay us the fixed high price for the power so our plants won’t have to compete.’”

‘Growth through our regulated holdings’

FirstEnergy spokesperson Doug Colafella says the utility “has taken significant actions—particularly in the past 12 months—to improve our financial position, lower our cost structure, and position the company for more stable and predictable growth through our regulated holdings, and overcome the lingering effects of the recession as well as challenging capacity and energy markets.

“We believe the strategies we have put in place, together with our commitment to operational excellence and financial discipline, will provide long-term value and predictable, sustainable growth to our investors,” he added.

A more optimistic analysis posted by investor James Bjorkman on Seeking Alpha dubbed FirstEnergy a “recovering utility.” FirstEnergy should be able to pay sustainable dividends to “patient investors,” he wrote.

However, Kunkel notes that Bjorkman’s financial analysis “does not really address the serious problems the company has with debt and with their inability to balance revenues and expenditures.”

And even Bjorkman noted that FirstEnergy is “retreating from deregulation to shield itself from the vicissitudes of the market.”

Other Ohio utilities want the PUCO to approve plans similar to FirstEnergy’s.

Lawmakers who pushed SB 310 through the legislature have railed against the renewable energy and energy efficiency standards as interfering with the free market.

However, those lawmakers have so far been silent about Ohio utilities’ efforts to guarantee sales for non-competitive coal plants.

“This clearly violates every principal of markets,” said Rob Kelter, an attorney with the Environmental Law & Policy Center. Ohio legislators “need to hold hearings and put a stop to this.”

“It’s no coincidence that the utilities want this sweetheart deal at a time when new emissions regulation is requiring the cleanup of those plants,” added Kelter. “In a competitive system, the plants that should get cleaned up because it’s economic to do so will get cleaned up, and other plants will be retired.”

“Since deregulation was proposed more than a decade ago, AEP Ohio has warned against price volatility in the market,” Flora added. “We believe our customers deserve to have these options to help protect them from the wavering market.”

If approved, though, distribution customers would have no choice about rider charges. Critics also say the concept runs against the idea of a free market for electricity generation.

“There will be times when customers will pay a little bit more for electricity,” Kelter said, because that’s how markets work. “The bottom line is we moved to that system with the promise that it would generate competition and that consumers would benefit in the long term.”

Jobs are another concern for both supporters and opponents of the utility plans.

Prepared testimony by AEP’s president and chief operating officer, Pablo Vegas, said that without the guaranteed sales, the plants “will be at greater risk of retirement.” Those closings would require the addition of new generation capacity, he warned.

“More than 1,100 employees at these facilities provide approximately $86 million in direct income and indirectly contribute to over $173 million of income to the state,” Flora said.

“When you look at the coal industry as a whole, you have one that’s declining,” said Dan Sawmiller of the Sierra Club’s Beyond Coal Campaign. In contrast, jobs in renewable energy and energy efficiency have been predicted to grow, he noted. Plus, “Energy efficiency was saving more money than it cost.”

The Environmental Law & Policy Center and the Sierra Club are members of RE-AMP, which publishes Midwest Energy News.