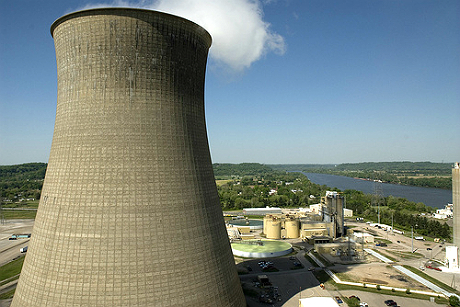 American Electric Power (AEP) is on notice that it may be sued for alleged violations of the Clean Air Act by its Gavin Power Plant in Cheshire, Ohio.

Last week, the Sierra Club sent a 60-day notice of intent to sue, which claims that excess emissions of sulfur dioxide created a “public nuisance” in violation of the law. The notice is the first step under a federal law letting citizens sue to enforce the Clean Air Act.

The notice, however, is unrelated to AEP’s pending requests that would have the Public Utilities Commission of Ohio (PUCO) make ratepayers guarantee sales for all the output from certain coal plants.

“This was not a response to [AEP’s] bailout request” to guarantee sales for other coal plants, noted Dan Sawmiller of the Sierra Club’s Beyond Coal Campaign.

In fact, Gavin is the only AEP coal plant in Ohio not included in the proposal.

However, Sawmiller noted that the Gavin plant’s location is “right next to Kyger Creek, which they are asking to bail out.”

“The fact is just simply that coal is an extremely dangerous fuel source, and it’s causing health impacts across the country,” Sawmiller stated.

More specifically, the notice to AEP Generation Resources, Inc. claims that Gavin’s “widespread violations” of the one-hour sulfur dioxide standard under the Clean Air Act have created a “public nuisance.”

According to the notice, the U.S. Environmental Protection Agency (EPA) set that standard at a level necessary to protect the public health. Thus, it states, going over that level presents a “serious threat” from short-term exposure to sulfur dioxide emissions.

Potential health problems linked to short-term exposure to sulfur dioxide include “decreased lung function, increased respiratory distress such as chest tightness, wheezing, and shortness of breath, and other serious indicators of respiratory illness,” states the notice. People with asthma, children, and the elderly are particularly at risk for respiratory problems.

Nearly 2,000 people live within three miles of the Gavin plant, according to the NAACP’s 2012 report, Coal-Blooded: Putting Profits Before People. The organization gave the Gavin plant an environmental justice grade of C-.

The Clean Air Act allows citizens to sue to enforce its terms. Before going to court, however, citizens must provide 60 days’ advance notice of their intent to sue. The letter sent last week by the Sierra Club’s counsel is thus the first step in that process.

But going to court is not a foregone conclusion if the parties can otherwise resolve the dispute.

“We are willing to examine the information that the Sierra Club believes support these allegations and will respond to them within the period prescribed in the Clean Air Act,” said AEP spokesperson Melissa McHenry. However, she also noted that AEP has “no reason to believe that ambient air quality in southern Ohio fails to meet the one-hour SO2 standard.”

“The generating units at our Gavin Plant have been equipped with very efficient flue gas desulfurization units—sulfur dioxide (SO2) scrubbers—since the early 1990s,” McHenry added. “The other major source of SO2 in the area, Kyger Creek Plant, also recently completed installation of state-of-the-art SO2 controls. “

Even with emission controls, a typical coal plant emits about 7,000 tons of sulfur dioxide each year, reports the Union of Concerned Scientists.

“When we identified these violations, we took considerable time to go through the details and understand what’s happening,” Sawmiller stated.

Sulfur dioxide isn’t the only pollutant of concern from coal plants.

Nitrogen oxides and volatile organic compounds both contribute to ground level ozone, or smog, which is also linked to acute and chronic respiratory illness. Soot, or particulates, likewise adds to respiratory problems.

Carbon monoxide impairs the blood’s ability to carry oxygen. It can cause headaches and place added stress on people with heart disease.

Health problems aren’t the only worry from coal plant emissions. U.S. EPA has identified carbon emissions from power plants as a major source of greenhouse gas emissions, which contribute to climate change.

The Gavin power plant emits more carbon dioxide than any other power plant in Ohio and ranks sixth in the country for those emissions, according to a September 2015 report from Environment Ohio.

For now, the potential lawsuit focuses on alleged levels of sulfur dioxide emissions and their creation of a public nuisance.

“We’re hopeful that AEP will respond to this in a way that shows they will come into compliance,” Sawmiller said. Otherwise, a complaint in federal court could be the next step.

The Sierra Club, Union of Concerned Scientists, NAACP and Environment Ohio are members of RE-AMP, which publishes Midwest Energy News.