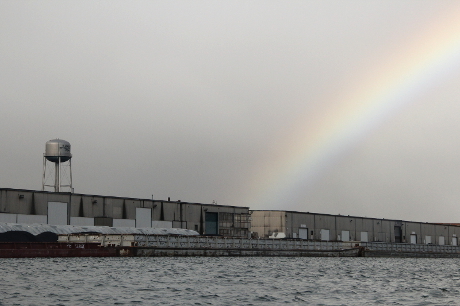 Barges filled with material that appears to be petroleum coke line the Calumet River in Chicago. (Photo by Kari Lydersen)

A full rainbow arched over the Calumet River on a bleak day in late September, lending a hint of beauty to the massive abandoned grain elevator, the ramshackle warehouses and the lines of barges moored by the Illinois International Port.

Some of the barges were covered, but at least nine of them were uncovered and piled high with a powdery black material that appeared to be petroleum coke, or petcoke, the byproduct of oil refining that has sparked a grassroots uprising and political debate in Chicago.

It’s not clear that the material is definitely petcoke. Facilities along the Calumet also handle and store coal and metallurgical coke, or metcoke, and various other bulk materials.

U.S. Coast Guard spokesperson Lt. Simone Mausz said that no government agency tracks barges on the Calumet or other Chicago rivers. “It’s impossible to tell how many barges go up and down the river, how many are ‘red flag,’ how many are carrying petcoke,” she said.

An industry spokesman declined to disclose what materials the barges are handling, and officials from Chicago’s port authority did not respond to requests for information on the shipments.

In the absence of information, residents see the barges as the latest wrinkle in the petcoke story, representing new concerns about the material and also about a serious lack of transparency regarding any potentially toxic materials that are moved on the river.

“There’s so little transparency, it’s really hard for the public to know what’s going on and what the moving of this stuff means, where it’s coming from, where it’s going on the waterways around them,” said Josh Mogerman, spokesman for the Natural Resources Defense Council.

From piles to barges?

The Calumet River is part of the Chicago Area Waterway System; the Calumet could be seen as a lesser-known sister to the Chicago River. Both rivers flow from Lake Michigan to canals that ultimately feed into the Illinois and then the Mississippi River.

The Calumet winds through the Southeast Side of Chicago, home to heavy industry and historic neighborhoods that once housed employees of now-defunct steel mills. Residents in these areas sounded the alarm in 2013 about piles of petcoke rising along the banks of the Calumet River, at a facility owned by Koch Industries subsidiary KCBX and by a locally owned company called Beemsterboer Slag Inc.

After black clouds of petcoke blowing over residential neighborhoods caught the attention of public officials – thanks to social media posts and protests by residents – city and state officials including Chicago Mayor Rahm Emanuel and Illinois Attorney General Lisa Madigan got involved. The city ultimately adopted rules that limit the size and footprint of petcoke piles and mandate various dust control measures. Since the rules were instituted, the piles along the Calumet are smaller at KCBX’s site, and Beemsterboer’s site is shut down.

But vigilant residents say that now they are seeing increasing numbers of uncovered barges filled with what appears to be petcoke on the Calumet River, often moored stationary in large groups like those outside the Illinois port facility, just downstream from Lake Calumet, which is connected to Lake Michigan.

Some residents suspect that because of the curbs on petcoke piles, it is being stored on barges as a stopgap measure or a de facto way to skirt the rules, which KCBX is also seeking variances from. The rules require that trucks carrying petcoke be covered, but barges don’t need to be.

“All these things are happening under the radar right now – it’s one thing when the piles are six stories high and you can see it from your backyard, but now they’re moving petcoke everywhere, being very sneaky about it,” said Olga Bautista, a leader of the Southeast Side Coalition Against Petcoke who is running for alderman in the February 2015 elections because of the issue. “They’re moving it, they’re storing it on these barges.”

People in a position to confirm or deny those suspicions, however, aren’t talking.

Jake Reint, a spokesman for KCBX, said the company cannot discuss any of its barge shipments for competitive reasons.

“The Calumet has long been a working river and a means for transporting all kinds of products to the marketplace, including petcoke and coal which are difficult to distinguish,” Reint said. “It’s also important to note that KCBX is not the only destination or source for these types of products on the river.”

And, Reint added, “We use a variety of means to transport product. Overall shipments to and from our facility depend primarily on market demand. There have been some adjustments to our logistics – including scheduling — to accommodate the city’s rules but overall traffic to and from the facility has not increased significantly nor is it expected to.”

Mausz said that some cities like New Orleans, San Francisco and New York have Coast Guard centers that track barges, but Chicago does not. She said that anecdotally, officials have noticed more barge traffic on the Calumet River in general in the past year. “Not just petcoke, all kinds of cargo, rock and salt,” she said.

Industry and port authority officials are silent on whether the barges contain petcoke or some other material. (Photo by Kari Lydersen)

If increasing numbers of barges are being moored in the river heaped with petcoke, it’s not clear if this would be an intentional or strategic plan for the companies that ship and buy petcoke, since it is likely more expensive to store material on barges than in large piles on land.

A call for comment was not returned from a barge towing company that was moving four barges piled with black dusty material the same day the moored barges were observed. Calls were also not returned by the Illinois International Port District, whose facilities are beside the group of stationary barges piled with what appears to be petcoke.

The Illinois International Port District rents space to private companies to use docks and storage space. The port has long been considered an opaque and troubled entity; last year an audit by the state auditor general revealed a host of problems including mismanagement, poor record-keeping and lack of oversight of its private tenants.

There has been a significant increase of petcoke storage in Chicago largely because of the expansion of the BP Whiting oil refinery across the border in Indiana to process more tar sands, which produces more petcoke than lighter oil does.

The BP Whiting refinery is not far from the waterway system that includes the Calumet River, though locals think the barges may actually be coming from oil refineries in towns about 40 miles to the southwest, close to a canal that connects to the Calumet River. One resident has also seen large numbers of barges piled with what appears to be petcoke on that canal, he said.

The location of the barges – around a mile downstream of KCBX’s facility – and their height mean that dust blowing off the barges probably wouldn’t billow into residential neighborhoods like it did from the piles. But residents and environmental experts say it is still an environmental problem, potentially polluting the river.

“The first time I went out on the river to look at this stuff, we noticed a huge amount of dust caking the surface of the Calumet River around the barges moored nearby,” said Mogerman, who also took photos of a black plume spreading through the river adjacent to KCBX’s facility.

“I can’t tell you for sure if it was petcoke or something else, but the proximity to Beemsterboer and KCBX implies there may be a real issue in terms of impacts on water quality,” he said. “The surface of the river was literally caked with particulate matter and floating powdery stuff.”

Though petcoke is not classified as a hazardous material, it contains toxic and heavy metals including lead, sulfur and nickel. When airborne, the particulate is also a health risk. Mausz noted that petcoke is not a “red flag” cargo like chemicals and other oil products including vegetable oil.

Even aside from the specific environmental effects, residents see the barges as more evidence that even after the city rules were passed they are being treated as a “dumping ground,” saddled with heavy industry and storage and shipping of industrial, toxic byproducts that would likely never be stored along stretches of the Chicago River in well-off neighborhoods.

The Calumet River may never have the flotillas of kayakers or tony riverside bars and cafes that have become more and more common on the Chicago River. But residents say they would like to be able to paddle, fish and bird watch more safely and comfortably along the Calumet and in the surrounding marshes and ponds. And the river hosts a significant amount of pleasure-boating, since its marinas are more affordable than ones farther north and they are more accessible to people from southern suburbs.

Mausz said that more barge traffic naturally means an increase in accidents involving barges, a concern that many residents have raised. In June three boaters died after a nighttime collision with a vessel towing six barges in the Cal-Sag Channel which connects to the Calumet River, though there’s no indication those barges contained petcoke and the towing operation was not considered at fault.

While some heavy industry and shipping on the Calumet is unavoidable and part of the river’s history, residents and environmentalists see storage or high-volume shipping of petcoke on barges as an unwelcome and unnecessary intrusion.

“Is that the highest and best use of our waterways, whether long or short term, to be warehousing more of this junk?” asked Mogerman. “The answer to that is no.”