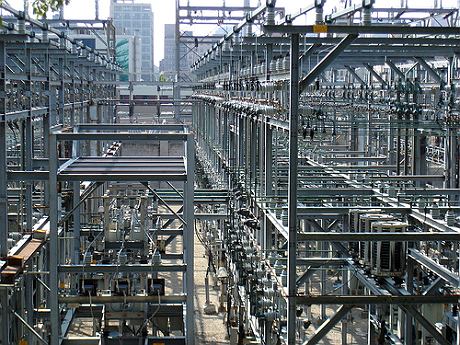 An electrical substation near downtown Minneapolis. (Photo by Eric Wilcox via Creative Commons)

The two investor-owned utilities serving Minneapolis are expected to reach a historic first-in-the-nation agreement today that will pave the way for a cleaner energy system in the city.

Xcel Energy and CenterPoint Energy, which provide electricity and natural gas to the city, have signed on to a “clean energy partnership” with Minneapolis calling for creation of a board of public and utility officials to push for energy efficiency and renewable energy programs. A separate committee will oversee progress on reducing carbon emissions.

The franchise agreement with Minneapolis would be for 10 years, rather than the usual 20-year contract, and allows the city to end the arrangement any year after the fifth year of the contract — and with a one year notice.

A separate clean energy agreement with the utilities will focus on the goals Minneapolis set forth in its Climate Action Plan and Energy Vision that calls for a 15 percent reduction in greenhouse gas emissions by 2015, 30 percent by 2030 and 80 percent by 2050.

The agreement and partnership emerged from a struggle that began more than a year ago with a proposal by activists to create a municipal power company in Minneapolis. They timed their pressure to coincide with the impending renewal of franchise agreements set to expire at the end of 2014 by suggesting a citywide referendum be added to the ballot.

Fearing the loss of such a major customer, the utilities took different paths before suggesting that they could, in fact, work with the city on greenhouse gas reduction policies and programs.

“The agreement is pretty good,” said John Farrell, who helped lead a campaign called Minneapolis Energy Options which initially lobbied for a referendum to ask Minneapolis residents if they wanted the city to start a municipal power company. Boulder, Colorado, currently served by Xcel, is exploring municipalization after voters there approved two referendums on the issue.

“The framework that they’ve set up with the community advisory committee and the term of the agreement and the way the city can get out of it lends itself to a real powerful potential for partnership,” continued Farrell, a policy director at the Institute for Local Self-Reliance. “I hope it will be an example and a model for how cities around the country can work with their private utilities to really move the ball on energy and energy efficiency and reducing carbon.”

The agreement starts next year and if progress is not adequate Minneapolis could terminate the agreement as soon as 2020, he pointed out.

“It’s longer than I would like but it offers some teeth to the city and it would probably take more than two years to get honest feedback on whether or not the agreement is working,” he said. “Five years is a reasonable amount of time.”

The advisory committee, Farrell said, will offer a consistent way for the community to be involved and to make certain the board — composed of two senior officials from each utility, the mayor, two council members and the city coordinator — are making progress toward a cleaner mix through renewables and efficiency strategies.

Rebecca Virden, spokesperson for CenterPoint Energy, said she checked with the Edison Electric Institute and learned that no other city in the country had ever tried a city-utility partnership agreement.

“There’s nothing like this — two publicly held companies coming together with a city to reach their carbon reduction goals through a focus on clean energy,” she said.

In a prepared statement, Xcel Energy said it was “pleased we reached tentative agreements to renew our franchise and to begin a Clean Energy Partnership…The work plan may include ideas such as renewable energy offerings and new and enhanced energy efficiency programs for residents, businesses and multi-family buildings to help manage energy costs and reduce greenhouse gases.”

The agreement could also be a boon to low income residents who have a “high energy burden” and do not have the financial resources to invest in renewable energy, said Shalini Gupta, executive director of the Center For Earth Energy & Democracy in Minneapolis. Since many new city council members and Mayor Betsy Hodges campaigned on equity, how that issue will be woven into the city’s energy mix will be watched by activist groups.

“This is a historic agreement on multiple levels but it’s clear that equity needs to be part of it,” she said.

The city’s Energy Pathways report lays out a roadmap for reducing energy consumption and increasing renewables as part of promoting equity, from adding more solar in low income neighborhoods to increasing efficiency of single and multi-family housing, Gupta said.

The work of Minneapolis Energy Options was “key and crucial — without some kind of competition or potential alternative out there we wouldn’t be here today, especially with an electrical utility that was a monopoly,” said council member Cam Gordon, who helped write the legislation.

The either-or quality of the debate — staying the course with cooperation from utilities or creating a power provider — pushed the issue forward, he said. Xcel representatives even began showing up at neighborhood meetings to listen to residents about their concerns.

Yet while Gordon remains optimistic the city can move forward he’s concerned utilities are so accustomed to the fossil fuel business model that it “will continue to dominate things. We’ll see.”

The case against municipalization

The Energy Pathways report suggested the city-utility clean energy partnership made the most sense in reaching the sustainability goals Minneapolis has set, said Sheldon Strom, president and founder of the Center for Energy and Environment (CEE), which drafted the report.

Creating a new municipal utility would be a costly and would “not necessarily give you cleaner energy than you’re getting,” Strom said.

The report, in fact, suggests the legal issues alone would take as long as two years to resolve. The annual expenditures would be around $500 million for a municipal utility and it would employ more than 600 people. Xcel could ask for as much as $3 billion in compensation for its distribution system, the report said, saddling the city with substantial debt.

“In summary, while the City would gain more control over its energy services by forming a municipal utility, with this control would come exposure to significant risk in the form of external forces that are beyond the City’s control – forces such as the electric market, technology innovation, federal and state regulations, and the weather,” the report said.

Instead, the CEE suggested the utility-city partnership would be the least expensive option and the most likely to succeed.

“Initially it was quite contentious but the city and utilities are now serious about accomplishing something,” Strom said. And if Minneapolis officials see little progress, he noted, they always have the option of ending the franchise agreement.

As Minneapolis and its utility partners move forward they will find the easier things they might do to reduce energy are largely already in place, said Strom. Xcel is a national leader on efficiency and renewables, he pointed out, and the city and the nonprofit communities have many energy-related programs underway.

But Strom sees that the utilities and the city could collaborate on housing maintenance codes and new licensing permits to encourage energy efficiency, in particular in multi-family housing buildings. The report also suggests the creation of “green zones” to improve energy conservation in high risk neighborhoods, lending programs for energy efficiency and other efforts.

Anthony Newby, executive director of Neighborhoods Organizing For Change, said he hopes the city will demand more hiring of minorities and a push to keep energy prices  from rising. Economically disadvantaged households pay a significant percentage of their incomes for energy costs now, especially in winter.

“I hope they make a commitment to no rising energy prices,” he said. Finally, Newby would like to see if there is a way utilities could share part of their profits with consumers through rebate checks or other programs.

Strom is hoping for a good give-and-take on behalf of both parties to the agreement. “The utilities and the city understand each other’s issues and limitations,” he said. “From what I’ve seen it’s evolving into a pretty collegial approach. Exactly where that will go, well, we’ll have see what happens.”

The Institute for Local Self-Reliance and the Center for Energy and the Environment are members of RE-AMP, which also publishes Midwest Energy News.