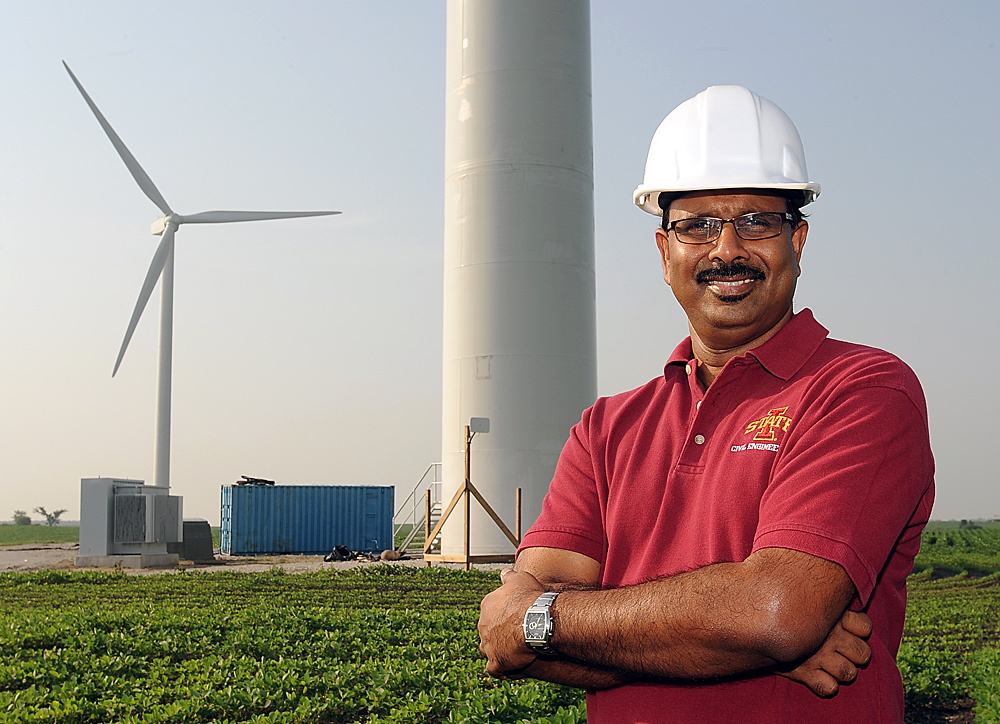 If wind turbines stood 20 or 40 meters taller than they typically do today, they would produce more energy and possibly make wind energy economically viable in areas where it currently is not.

An Iowa engineer says the solution to provide the necessary growth spurt is to switch from steel to concrete.

Sri Sritharan, the Wilson Engineering Professor at Iowa State University, is developing a wind-turbine tower constructed of modular concrete blocks that can be assembled to any height and any width. He believes it would address one of the major factors now limiting the height of wind-turbine towers: the overhead clearance between highways and their overpasses.

The currently prevailing 80-meter towers typically are transported cross-country in three segments on a costly truck built especially for the job, Sritharan said. The laws of physics prevent a tower from getting taller without also getting wider at the base, and a base wider than the currently-prevailing 14 feet won’t clear the vertical space between a roadbed and bridges that cross over it, according to Sritharan.

“When the tower gets wider, you cannot transport it. Period,” Sritharan said.

The obstacles notwithstanding, he said, “There is interest in going taller – 100 or 120 meters is what the industry is talking about.”

On that point, Mike Prior, executive director of the Iowa Wind Energy Association, agrees.

“Turbine manufacturers for a long time have had aspirations of going to taller turbines, because the wind resource [higher up] is more consistent,” he said.

In their lab in Ames, Iowa, Sritharan and his team are speeding up the pace of their work on a prototype, thanks a $1.25 million grant from the U.S. Department of Energy and $83,500 from the Iowa Energy Center. A partner in the project, wind-turbine manufacturer Siemens, is developing models and advanced engineering tools that will allow the research team to simulate the towers’ performance under various wind conditions and to optimize the design.

Sritharan uses a modular approach. He has designed two precast pieces, a panel and a column, both made of concrete, that can be assembled in endless combinations.

Sritharan hopes to have the system ready for market in about two years, and he believes it will be cost-competitive. Steel is manufactured in only a few places in the U.S., and much of it is imported from overseas, he noted. Concrete is widely and often locally available, meaning that the cost of transportation will be far less.

“You can manufacture these towers within a couple hundred miles of where you want to build the tower,” he pointed out.

In addition, the components Sritharan envisions could be transported on a standard tractor-trailer, far cheaper than transport by the specialized trailers used for steel towers.

Scott Baron, global product-line director for Acciona Wind Power, said the cost to merely transport a steel tower is hundreds of thousands of dollars, and that the tower itself accounts for about a quarter of that cost.

Acciona has erected about 200 concrete turbine towers in Spain, Poland and Brazil. Baron said that 500 more are in the pipeline, mostly destined for Brazil. He said Acciona also will be building concrete towers soon in South Africa and Mexico.

Acciona actually has built one concrete tower in the U.S.; it’s 100 meters tall, located near Iowa City, and was built in 2012 as a prototype, Baron said. Acciona sells the power to the local utility.

“We wanted to do it partly as a demonstration to the market, and to have people come and see it, and to get experience installing it in North American markets,” Baron said.

Will it pay off?

In order to pay off, taller concrete towers have to generate more power – and in the right place, they do, Baron said. It’s all about wind sheer – the tendency of the wind to blow harder as you go up.

“Each site has different sheer characteristics,” he said. In general, flatter land has less sheer. In locations with sufficient sheer, he said that a turbine with a hub height of 120 meters, what he called the “sweet spot,” typically produces about 10 percent more energy than an 80-meter tower.

“I think there is demand for products that bring a lower cost of energy,” Baron said. “Concrete towers definitely have that capability. We see a lot of potential for that. Over time, I think we’ll see concrete towers have more penetration in the U.S. market.”

Efforts are underway in several countries to develop towers that can go taller. General Electric this year began producing what it calls its Space Frame Tower, with five sides of metal lattice work covered with a PVC-based fabric.

In Germany, different hybrid designs combining concrete and steel are under development. And two years ago, a wooden tower was installed in Germany, with a hub height of 200 meters.

Baron foresees a demand for taller concrete towers, even in the U.S. But the conditions here are a bit less conducive than elsewhere, he said. Concrete is most financially favorable in countries where steel is costly. Brazil is such a country. The U.S., not so much.

And Baron said that under Federal Aviation Administration regulations, a turbine with a rotor height exceeding 500 feet requires a special permit that consumes a lot of time. Because of the ever-changing status of the production tax credit – and therefore the finances of wind energy – developers are not keen to pursue the FAA permit, he said.

Another factor slowing the adoption of taller concrete towers is an overall more conservative attitude, especially among banks and other traditional funders, according to Baron.

New technology is “not as accepted” in the U.S., he said. “It’s harder to do here than in other places.”