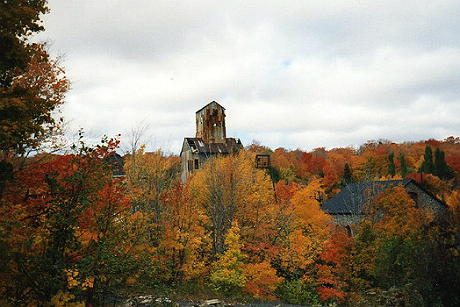 Abandoned mine shafts, like this one near Painesdale, Michigan, could provide a source of geothermal energy. (Photo by Joel Dinda via Creative Commons)

As Michigan’s Upper Peninsula grapples with a looming electricity crisis, the region’s copper-mining past could play a role in its energy future.

“Mineshaft geothermal” is gaining attention here as researchers investigate the energy potential stored hundreds of feet below the ground. The water in these abandoned and flooded mines, which expand throughout the U.P., is just now starting to be used to heat and cool buildings.

“Wherever anyone has a mineshaft and access to it, the potential is there,” said Jay Meldrum, director of the Keweenaw Research Center at Michigan Technological University in Houghton. Meldrum and his team are investigating the potential of more than 30 mineshafts in the historic village of Calumet, population around 700.

“Everyone is interested because of the cost of energy, even though this is used for heating and not electricity,” he said. “We’re trying to figure out whether it’s feasible or not.”

Once abandoned, the old copper mineshafts slowly fill up with groundwater — in some cases taking 60 years to fill up to the surface. Meldrum said that water stays consistently around 55 to 60 degrees Fahrenheit. In one reservoir, Meldrum found 17 billion gallons of water.

The process draws water from about 250 feet below the ground surface, while the mines themselves go down thousands of feet. The center’s new engineering design center is heated and cooled by a distributed system with 18 heat pumps. When the water is cycled through, it is returned to the mineshaft.

“We can heat one room where people are and cool another room where there is testing or where there are computer servers. It’s proved to be very cost effective for heating and cooling the building,” he said, adding that the center has seen savings of about 30 percent over a conventional system.

While Calumet is home to exclusively copper mines, former iron mines are found farther south. Elsewhere in the Midwest, including in Ohio, abandoned coalmines are being studied for similar potential. The world’s first minewater geothermal project opened in the Netherlands in 2008.

“When we put it in, we didn’t realize how popular this would be from an academic viewpoint,” Meldrum said. “We did it because we thought it was the right thing to do.”

While Meldrum focuses on the technical side of potential mine redevelopment for geothermal, social scientists are figuring out how to prepare other communities for its use.

Richelle Winkler, professor of sociology and demography at Michigan Tech, is leading a team that interviews locals about this process, essentially to gauge interest on the historical link between the community’s past and today. With help from a federal Environmental Protection Agency grant, the team aims to put together a guidebook for communities interested in mine redevelopment.

Calumet faces problems like declining population (and therefore tax revenue) and crumbling infrastructure, she said. Mine redevelopment might be a way to rejuvenate the community — economically or culturally.

Leaders in the community “felt (mineshaft geothermal) might be an opportunity to re-imagine what the community is all about and move it forward in a direction that could be more affordable potentially and more sustainable, while at the same time take advantage of the legacy of mining, which is very important to people in the community,” Winkler said. “As opposed to focus on the negative issues related to that history, which is a lot of the ways people talk about former mining communities.”

Essentially, Winkler and her team of students focus on questions about how the process could lead to community development under a framework of financial stability, cultural capital and balancing what’s good for the environment. They interview locals about how much heat they use and what they think about tapping into the old mines. The questions people often have, Winkler said, are who’s going to pay for it, how much will it cost and who owns the water in the mineshafts.

“Certainly people think about this as a potential way to save money,” Winkler said, adding that the general context of high energy costs in the U.P. isn’t a direct driver of her research. Moreover, “It’s something that could potentially be applied in a widespread kind of way” throughout the world.

Some numbers Meldrum has run show that currently the systems may not be more efficient than natural gas — particularly since it takes electricity to pump water from the mine shaft. And it’s considered “low-grade geothermal,” which means the water isn’t hot enough to generate electricity.

“The one thing that’s unique about our area is that we pay really high electricity costs,” he said. “It’s probably double to triple what you pay in downstate Michigan.”

But while natural gas has “only recently become available in the area,” Meldrum said, “Natural gas prices are going to go up. I think that’s pretty obvious.”

Some mineshafts are more difficult to tap than others, depending on how steep the grade is and whether debris (for example, old railroad cars) is in the way.

While some places have been able to use geothermal for district heating, regions in most of the U.P. are too sparsely populated for such applications, Meldrum said. One mineshaft may be able to work for a few buildings, though, depending on its location.

“Here we have a resource but not a district,” he said. “It will be beneficial to those people who have access to it.”

And as Winkler mentioned, there are concerns in the community about how costs may be shared and who ultimately owns the water below ground.

The latter issue “has not been worked out in court anywhere. There’s no legal precedent.”

“This resource is our resource as a community,” Winkler said. Those interviewed “talk about how their ancestors dug these holes and if water can be used based on labor people put in over decades and decades ago. There is a sort of attachment and feeling of identification and ownership.”

At this point, mineshaft geothermal potential is uncertain in the context of larger questions about the U.P.’s future energy mix.

However, “I think a combination of solutions like this are going to be the wave of the future,” Meldrum said. “Whatever that community has as a resource, if they can figure out a way to reduce heating costs that is better than using electricity, we’re looking at all ways to do that.”

Editor’s note: This is the third in a series of stories leading up to the U.P. Energy Summit on Oct. 28.