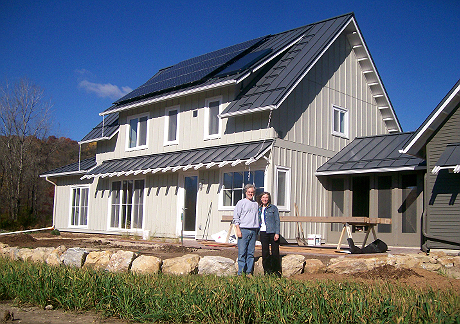 When John Gaddo and Nancy North set out to build a small, energy-efficient house in southeast Minnesota, they found themselves gravitating to passive house, a rigorous design standard that aggressively slashes energy use.

But computer modeling showed their plan would fall just short of the standard, which was devised in Germany, unless they made some onerous changes. Among them: eliminating most north-facing windows, piling on to the already copious insulation, and adding unwanted floor space in order to satisfy a limit on heat demand per square foot.

“All of those compromises just didn’t make sense to us,” said Gaddo, a manager at Wisconsin Public Radio. North runs a strategic communications firm that specializes in environmental conservation projects.

The standard also wouldn’t credit the couple for using solar panels to offset their energy use, even though PV was an affordable way to make the house net-zero.

Like some other sustainability-minded homeowners, they decided it wasn’t worth sacrificing some great design features and their pocketbook to meet the passive house benchmarks.

“We’re a little disappointed,” Gaddo said. “Even though we don’t have a piece of paper that says it’s certified, it does everything that a passive house can and should do.”

Their predicament illustrates a stumbling block for the highly regarded passive house standard, which slashes energy consumption by 60 to 80 percent versus most building codes. Crafted for temperate zones like Stuttgart, it’s proved tough to implement in North America’s more extreme climates.

The result has been sluggish adoption, with only about 125 certified projects in the U.S. since 2003, versus an estimated 20,000 or more passive structures built in Europe. Passive projects include multifamily, commercial and government buildings as well as single-family homes.

The certification is not just symbolic – it is a mark of quality assurance backed by inspections and testing that ensure a building will perform as designed. It can contribute to a property’s value and set an example in the community.

To encourage the practice, the Passive House Institute U.S., or PHIUS, is creating a new set of standards tailored for each of North America’s 1,000 or so microclimates. The fine-tuning should make passive designs more affordable, particularly in the Upper Midwest.

Investments in passive features will be pegged to heating and cooling energy savings over 30 years, with adjustments every three years for changing market conditions. In the past, paybacks have extended to as long as eight decades.

“Essentially it’s about realism,” said Ryan Abendroth, a St. Louis designer who served on the technical committee that drafted the changes. “I think there are a lot of people concerned about energy use but when they look at passive house they say, ‘This isn’t feasible.’”

The new standards position passive design to play a bigger role in government energy initiatives, such as the U.S. Department of Energy’s Zero Energy Ready Home designation. The DOE’s Building America program issued a grant to fund the effort, which was a collaboration with the Massachusetts-based Building Science Corp.

“I think of it as re-Americanizing passive house,” said Graham Wright, a Portland, Oregon, engineer who led the technical committee. The German passive house movement, which has taken hold throughout Central and Northern Europe, actually grew out of North American building science research conducted during the 1970s energy crisis.

While the number of passive projects should climb, particularly in the Upper Midwest, no one expects rapid mass market adoption. The 30-year return on investment is still too long for the American real estate market, Wright said.

“You need really short paybacks, and we’re not in that ballpark,” he said.

Rather, the hope is that building codes and consumer expectations will rise to meet higher performance standards including comfort, durability and clean air. Passive house is “staying on the leading edge,” Wright said.

‘It’s really not a technology issue’

A few years ago, American designers believed these extra investments would pay off in energy savings, but returns didn’t pan out in North America as they did in Europe due to different climate conditions and mechanical systems.

Still, the principles behind passive design have attracted U.S. builders and architects. Formed in 2007, the Chicago-based institute has trained 1,500 professionals including 550 certified passive house consultants and 150 certified builders.

The adjusted standards are “absolutely necessary in order to maintain the momentum that the passive house movement has gained,” said Christi Weber, whose Madison, Wisconsin, firm has designed several projects following passive house principles including Gaddo’s and North’s, but has yet to get one certified.

Outlined at the institute’s annual conference in September, the new standards revise each of the passive house benchmarks: airtightness, heating and cooling energy, and total energy use.

• Allowing the use of solar panels to offset energy use. Historically, passive house certifiers didn’t include PV in energy calculations out of concern that builders would simply plop solar panels onto wasteful structures without taking measures to conserve energy. But plummeting prices for PV now make it impossible to ignore in the energy equation.
• Acknowledging Americans’ higher usage of heat-generating appliances such as clothes dryers and water heaters that can offset the need for insulation, while assuming occupants of passive houses will be more conservation-minded than average homeowners.
• Capping total energy usage based on each occupant’s “fair share” of global carbon emissions.
• Making it easier to certify small detached houses by altering calculations for total energy and air-tightness. Row houses and multifamily housing are inherently more sustainable, but ultimately the committee decided it could not alter the American cultural preferences for single-family homes.

A complete draft is expected to be released for public comment by mid-November, with adoption in early 2015.

Residential and commercial buildings consume about 40 percent of the nation’s energy and represent a prime target for reducing carbon emissions.

“The good news is, the Department of Energy and PHIUS are working together on coming up with standards that the DOE can promote,” she said.

Meanwhile, Gaddo and North, who are in their late 50s, find their nearly completed house is inspiring other homeowners, even without a passive house certification. One couple drove several hours to inspect their windows, which were imported from Poland.

“A lot of people have paid attention to what we’re doing,” Gaddo said. “It’s a huge thing to understand and to learn about. So we’re happy to share some of that knowledge.”