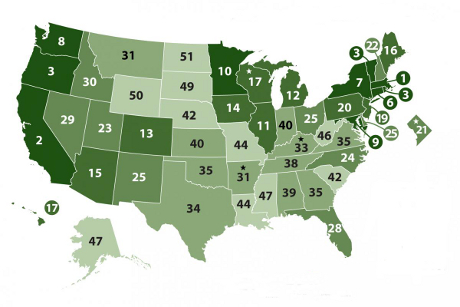 Minnesota led Midwest states in energy efficiency in a recent study while two of its western Dakota neighbors scored among the worst in the country.

The ACEEE lauded Wisconsin for being among the top four states for improving its energy efficiency environment. The rest of the region had a much more mixed scorecard, with both Ohio (25) and Indiana (40) falling substantially in the rankings due to legislative decisions that backtracked on energy efficiency standards.

On a 50 point scale no state had a perfect score. Massachusetts led the country, toppling California. The other top scoring states were in the Northeast and the Pacific Northwest.

In the report’s city rankings, Minneapolis and Chicago came in at 8th and 9th, respectively.

No state, in fact, fell further than Indiana. “This year, the state fell thirteen spots — more than any other state — mainly because state legislators voted to eliminate the state’s long-term energy savings targets,” the report said.

“There has been some indication that utility programs may continue, but legislative and regulatory structures remain unclear. As other states in the Midwest achieve high levels of energy savings for customers, Indiana will need to build a strong foundation for its new programs in order to create certainty for utilities, businesses, and residents and to keep up with its peer states.”

Ohio fared not much better after the legislature dumped targets for its energy efficiency resource standard. “Ohio fell notably in the rankings this year, and could continue to fall if utilities fail to include energy efficiency within their portfolios in coming years,” the ACEEE said.

North Dakota came in last at 51st with South Dakota in 49th place. Wyoming fell between them. The report said North Dakota finished last for the second year in a row because legislators have no interest in a comprehensive energy policy. Wyoming and South Dakota also have no real energy efficiency policies.

Missouri, Nebraska and Kansas also ranked near the bottom.

Minnesota, on the other hand, moved up one spot and into the top 10 due in part to an aggressive upgrade of building codes and savings derived from natural gas programs. Yet the organization warned state leaders not to rest on their laurels.

“Minnesota remains a leader in energy efficiency, but maintaining its position will require continued investment in a variety of policy areas,” it said.

The report highlighted that the state saw the second highest natural gas savings in the country in 2013. The state’s utilities scored 14 points, well above the median level of five. Another area it ranked highly in was policy, gaining 5.5 points out of seven, well above the 3.5 median score.

Minnesota scored above the median on transportation, building codes and combined heat and power (CHP).

The following is a closer look at how some other Midwest states ranked:

Illinois’s building codes neared a perfect score, receiving six of seven points due to high compliance and stringent codes. Transportation was twice the median and state-led initiatives include efficient buildings and fleets.

The report suggests more focus on transportation and CHP, along with this encouragement: “Illinois utilities are meeting energy efficiency resource standard targets, but are limited by the cost caps contained within the rules. There are indications that higher levels of savings may be achieved in future years as different funding streams are utilized for efficiency programs.”

The state scored above the median in every category. The ACEEE lauded Michigan’s transportation funding, utility policies regarding efficiency and government, including two loan programs and a rebate for energy investments.

“While the state’s existing EERS (energy efficiency resource standard) has set a good foundation, there are some areas for improvement. In particular, removing the spending cap would enable continuing advancement in cost- effective energy efficiency achievements in the future. The legislature is currently reviewing the EERS policy, with possible adjustments anticipated in 2015,” the report concluded.

Transportation and land use are seen as weak while building codes scored a six out of seven points. The state government has some good programs in place for efficiency, according to the report.

The reported added a few suggestions for policymakers. “In order to remain near the top of the rankings, Iowa will need to examine broad array of policy areas, including transportation and land-use planning and policies that enable combined heat and power development.”

While being dinged for changing the administrator of its “Focus on Energy” program the ACEEE still likes Wisconsin’s energy efficiency standards.

Where the state really shines, however, is in CHP, earning 2.5 points, the most of any Midwest state, no doubt due to the nine installations that occurred in 2013. That’s far more than other states in the region.

Wisconsin’s government initiatives receive an endorsement and the report notes that, like Minnesota, several institutions do energy efficiency research.

“The state is also effectively encouraging the development of combined heat and power,” the report said. “To move even further up the State Scorecard ranks, Wisconsin could focus its efforts on upgrading building codes and implementing policies to promote efficient transportation systems.”

The state scored a zero on transportation, with no policy put forward in that area. In other sectors the state saw scores matching the median levels.

“Legislators voted in 2014 to effectively eliminate these long-term savings requirements, leaving the future of efficiency within the state uncertain,” the report said. “Ohio fell notably in the rankings this year, and could continue to fall if utilities fail to include energy efficiency within their portfolios in coming years.”

The state received just one of seven points for state-led initiatives, which will come as no surprise to political observers. Utilities earned 4 points out of 20, due largely to a repeal of energy efficiency standards.

“Decoupling and performance incentives remain in place for specific utilities, and some have indicated that they will continue to implement efficiency programs in the future,” said the report.

The state scored poorly on transportation, average on building codes and CHP. The report said Indiana should begin “focusing efforts on a broader array of policies that encourage efficiency in transportation and the deployment of CHP would improve the state’s score.”