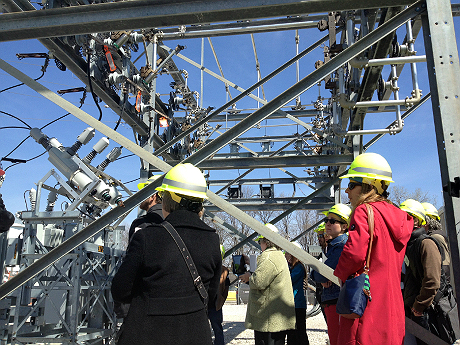 The smart meters being delivered to Illinois homes under the state’s 2011 smart grid law could potentially spark significant energy savings – relieving burdens on the grid and on power supplies and saving money for residents.

But that’s only if people use the information provided by smart meters to modify their habits, by shifting when they use energy, installing more efficient appliances and the like. Figuring out how to use a smart meter and respond to the data it provides is a complicated and intimidating task for anyone.

It is especially challenging for renters and public housing residents who don’t own their appliances or even pay their own energy bills; or for senior citizens who don’t know how to use the internet; or for immigrants who don’t speak English. And for people in low-income and marginalized neighborhoods in general, beset by violence, decrepit housing, and a lack of well-paying jobs, understanding and modifying energy use is likely to be a very low priority.

The smart grid law mandates that at least 30 percent of the $50 million set aside for public education – or $15 million over 10 years – be spent on educating such “hard to reach populations” during the smart meter rollout, which involves replacing almost four million meters.

The Illinois Science and Energy Innovation Foundation (ISEIF) is overseeing the effort and making grants targeting such residents. The first round of 12-month grants were awarded last December, the second round in July and another round opens in January.

The ISEIF is a member of RE-AMP, which also publishes Midwest Energy News.

ISEIF program director Clare Butterfield said the outreach efforts are off to a good start, as grantees with deep history working with the target populations figure out how to make energy savings and smart meters relevant and beneficial to regular people.

“Changing someone’s electric meter is a very uninspiring activity” on the surface, she said. “But what it really is is an overlay of data and intelligence that allows us to know things and make better decisions.”

With smart grids and meters those decisions happen on the individual level, in changing when you do laundry or how you set your thermostat; and on a societal level, for example with LED street lights that respond automatically to environmental conditions.

“It’s wonderful what this information will disclose to us,” Butterfield said. “And the coolest part is that you as a consumer can be part of this shift.”

About 78 percent of the outreach funding goes toward ComEd’s territory in Chicago and northern Illinois, and about 22 percent to Ameren’s largely rural customers throughout the rest of Illinois. Butterfield noted that connecting with low-income rural homeowners and various low-income communities and senior citizens in Chicago presents different challenges.

However outreach leaders say that “hard to reach” is actually a misnomer, since the residents they talk with are typically very receptive to learning about energy use and many live in dense and close-knit communities.

“The real hard-to-reach people are in the gated communities,” noted one organizer.

Outreach staff have not encountered the belief that smart meters represent a health risk or government meddling or spying – myths that have circulated on the internet and stoked opposition to smart meters elsewhere.

Many Chicago residents are faced with so many daily challenges and demands on their time and energy that monitoring and responding to a smart meter is hardly high on their list of priorities. Residents in many communities are dealing with street violence and neighborhoods full of foreclosures and vacant lots, and many are working long hours or two jobs to make ends meet.

The institute is working with the prominent design firm IDEO to develop “human-centered design” approaches that start with the premise of understanding how people think about and use energy. Starting by observing people in their homes, they will come up with specific models to be tested in pilot programs in Chicago and Hillsboro, Illinois and then implemented more widely.

“There are bigger challenges that can’t be addressed by energy efficiency,” noted Roanhorse, who grew up on the Navajo Nation where many homes lack electricity. “But energy efficiency is also an important issue because people are low-income and have high energy bills.”

Smart meter usage is curbed by the digital divide. If residents don’t have convenient access to the internet or aren’t familiar with using it, then they can’t currently easily access the data that the meters provide. For many immigrants language is also a barrier.

Butterfield noted that ISEIF and the utilities plan to develop convenient smart meter applications for smart phones. Low-income and immigrant residents typically use virtual tools and digital data much more through smart phones than through computers.

While the funding under the smart grid law is specifically for education about smart meters, it fits naturally into a larger context involving energy efficiency upgrades and weatherization.

Many low-income people are renters, often with absentee or inaccessible landlords, so they have little control over such structural changes to their apartments. In rental buildings where it can take ages to get broken stairwell lights or clogged drains fixed, suggesting that a landlord buy new appliances or new windows isn’t even on the radar screen.

Butterfield said that ISEIF grantees will seek creative approaches to helping landlords and housing authorities realize that such investments are a win-win situation for everyone.

Policy changes may also help. Roanhorse noted that weatherization and energy assistance programs include provisions that ironically can make it inherently more difficult for low-income people.

“A homeowner doesn’t have funds for a new roof, they can’t replace their leaking roof, so they get mold, which makes them ineligible to apply for weatherization funding because the house is considered dangerous, the mold needs to be remediated first,” she explained.

But building upgrades done for energy efficiency reasons can have larger ripple effects in raising property values and investment.

“As you improve building after building you’re improving entire neighborhoods,” said ISEIF program analyst Uzma Noormohamed. “We see a strong connection between energy efficiency policy and implementing our efforts to meet carbon regulations. And we need to be doing it in a way that delivers benefits back to low- and moderate-income communities, with lower energy bills, affordable housing, jobs for contractors.”

Fifteen years ago, Butterfield founded a group called Faith in Place that works with congregations of different religions across Illinois to raise awareness of and build responses to climate change and other environmental issues.

Faith in Place staff partner with religious leaders to start a dialogue about climate change and conservation and help residents make their own organic efforts. It often starts small with replacing light bulbs or installing rain barrels at a church, mosque or synagogue.

Faith in Place helps congregants organize “Green Teams” who do such projects, hold potlucks to talk about the issues, or take nature walks and remove invasive species in the forest preserves. That often leads to religious institutions installing solar panels, replacing windows or planting native gardens on their grounds, and congregants undertaking such projects in their own homes.

Outreach around smart meters and energy efficiency is a natural fit for Faith in Place, which received a first-round ISEIF grant. And it’s easier to delve into complicated technical information around the smart grid and smart meters with communities who already have a deep grounding on climate and conservation issues.

“We believe the messenger matters, it’s the people who understand the culture, theology and dynamics from that congregation who are pushing forward new ideas,” said Faith in Place executive director Brian Sauder.

Once there is an active green group at a given faith institution, they often end up networking with other religious groups around energy issues. Faith in Place was among the organizers of a September meeting that drew hundreds of people to Trinity United Church of Christ, a historic church on Chicago’s South Side, to advocate for the U.S. EPA’s clean power carbon reduction plan and climate-related environmental justice.

“Pretty soon you realize you have something in common with other religious communities,” said Sauder. “You are doing the same things, you share common water and air.”

Faith in Place Latino congregational organizer Lorena Lopez does smart meter-related outreach in Latino immigrant neighborhoods on Chicago’s South Side, including Little Village, where she grew up and formerly worked at the Little Village Environmental Justice Organization (LVEJO).

She noted that residents in Little Village, where smart meters have already been distributed, are particularly receptive to the message because of the years-long struggle to close the coal-fired power plant nearby.

“For me it’s personal when I go out to talk about smart meters and smart grid,” Lopez said. “It means that we don’t need to use as much energy and don’t need to build another coal-fired power plant. It’s an environmental justice issue.”

Faith in Place works with partners including the Citizens Utility Board and Elevate Energy to arrange free or affordable energy audits for congregations and individuals. Residents can get a free audit with a Tupperware-style house party, where their neighbors watch the audit in action. And with smart meters, neighbors can compare their energy use and use both cooperation and friendly competition to reduce it.

“You see we’re all spiking at the same time,” Lopez said. “When the kids are playing video games and you’re on the computer and running the drier. You think maybe we shouldn’t all be using so much at once. Or you can see, ‘I was the worst one on the block’  – how can I change that? Knowledge is power.”