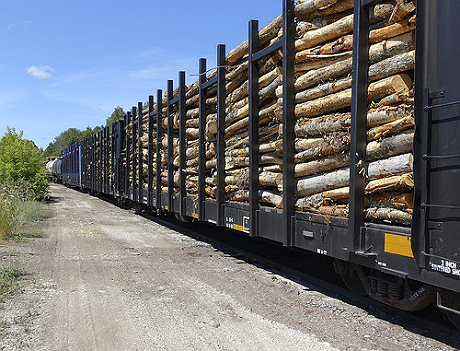 As stakeholders gather today in Marquette, Michigan to discuss the Upper Peninsula’s energy future, the extent to which renewable energy — particularly, woody biomass — plays a role will be a central topic.

Experts say it’s a dependable source that can be dispatched when needed, a sort of base upon which to expand wind and solar. Moreover, the U.P. is rich with forest waste products that are already widely deployed as a way to heat and cool buildings there.

“There is wind potential, there is low-quality solar potential,” said Jeremiah Johnson, a researcher at the University of Michigan’s School for Natural Resources and Environment. “But those don’t really solve the problem of reliability concerns with the Presque Isle [power plant] retirement. You need a firm resource to do that. A firm source is biomass.

“I wouldn’t dismiss the role of wind and solar, but you wouldn’t look at wind or solar as a means to solve reliability problems.”

So far nearly all of the renewable power generated in the U.P. comes from hydroelectric systems, according to figures provided by the Michigan Public Service Commission. Seven different utilities are generating a total of 164 MW of hydroelectric power, the numbers show. Among non-utility companies, another 72 MW is generated with hydro, biomass and wind. (Additional, and mostly likely small, projects were not included because they are not used for compliance with the state’s renewable portfolio standard.)

But Bill Cook, a forester and biologist for Michigan State University Extension based in Escanaba, says the MPSC numbers are misleading and don’t account for the role biomass plays in district heating and cooling.

“The words ‘energy’ and ‘power’ are not synonymous,” he said. “The largest renewable energy fuel source in Michigan, hands down, is wood.”

Going forward, woody biomass looks increasingly popular as a power source. Geothermal can be done on a small scale to heat and cool buildings; solar is intermittent and doesn’t solve base-load demand; and wind turbines, particularly offshore, are aesthetically controversial in the pristine peninsula.

The U.P.’s largest biomass facility, at 17.7 MW, is owned by L’Anse Warden Electric Company and started operating in 2009. The plant was converted from a former coal and natural gas-powered generating station.

Johnson provided a “back of the envelope” calculation showing that the U.P. would need roughly 250,000 acres of a dedicated energy crop to replace Presque Isle’s capacity. Another option is retrofitting the Presque Isle plant to run on a combination of coal and biomass.

“Those are pretty costly options and take time to execute as well,” he said.

Cook agrees that replacing Presque Isle with a single biomass-powered plant would be “next to impossible.” Rather, Cook envisions a series of combined heat and power plants, spread throughout the U.P., with capacities in the 20 MW to 30 MW range.

“I think (biomass) is the most logical way to provide base load electricity to the extent the resource will allow,” Cook said.

“We are responding to having the nation’s second-highest electric rates,” KREC president Melissa Davis said in a statement.

The coalition’s solution, which has drawn input from a variety of experts and from a diverse group of ratepayers, is a “reliable, interconnected, renewable energy plan that covers 13 percent of the U.P.’s residents. We intend to network with experts from the other 13 counties to develop additional plans for the rest of the U.P., based on our success here.”

The plan will blend “modest amounts” of biomass for base-load power, coupled with power from wind and solar. The proposal includes a plant that would run on forest residue, such as “small trees, branches, tops and un-merchantable wood left in the forest after the cleaning, thinning or final felling of forest lands.”

Sam Lockwood, of the KREC, told The Keweenaw Report website last week that small biomass plants in the 10 MW range would take about 18 months to build, as proposed in the plan. He did not specify the number and location of those plants. Davis declined to share a preliminary draft of the plan.

Shelie Miller, another professor at the University of Michigan’s School of Natural Resources and Environment, studies the trade-offs of pursuing new energy sources.

“With fossil-fuel sources, there are going to be environmental and social implications of dealing with those. On the other hand, renewable energy is sometimes not as easy to deal with on reliability and dispatchability,” Miller said. “Biofuels are a dispatchable resource, you don’t have to worry about intermittency issues. But you do have to worry about land use issues and sustainable management of forests.”

Abhilash Kantamneni, an engineer at Michigan Tech’s Keweenaw Research Center, was recently awarded a federal grant to study the energy potential at seven different industrial parks in the Upper Peninsula.

“It’s easy for people to dismiss renewables as being intermittent,” he said. “But no one is saying, ‘Let’s get rid of all coal and natural gas.’ We’re talking about a planned, phased deployment of locally owned sources being integrated into the grid.”

Kantamneni has promoted the Keweenaw region as a particularly good place for rooftop solar that averages a shorter time for return on investment than elsewhere in the state.

Since Michigan’s 2008 renewable energy law passed, which includes a 10 percent renewable portfolio standard, Kantamneni says that the cost of electricity generated from renewables is half of what it would be to build a new coal plant.

“As far as potential goes, we get twice as much sunlight as Germany does,” Kantamneni said. “Lake Superior is one of the best wind zones in the state, but it’s difficult at this point to have them line up exactly where the grid structure is.”

But given the pace at which the “energy crisis” is unfolding in the U.P., the region’s energy transition may be forced to take place at a faster rate than elsewhere — and could serve as a model.

“It’s a fantastic opportunity for Michigan to be a leader in the world of renewable energy,” Kantamneni said. “It’s in Michigan’s best interest to slowly diverge themselves from utility companies and Wisconsin and become increasingly self reliant on their assets.”

Cook, of MSU Extension, agrees: “This particular power plant closure is the harbinger of things to come in the Midwest with a lot of these old coal plants that are going to need upgrades. Presque Isle is sort of the tip of the iceberg, I suspect.”

Editor’s note: This is the fourth in a series of stories leading up to the U.P. Energy Summit on Oct. 28. Watch for more coverage of the summit tomorrow.