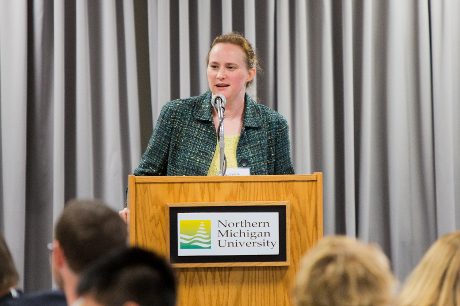 The message was set against a backdrop of federal regulatory decisions that could drastically increase electricity bills for Upper Peninsula ratepayers. More than 20 proceedings before the Federal Energy Regulatory Commission involve the fate of the coal-fired Presque Isle Power Plant here and how much ratepayers in Michigan — or Wisconsin, where plant owner We Energies is located — should pay.

“The fact that the federal government controls our destiny … does make it a tough situation when you have variables coming in and trying to dictate what we have to do,” state Sen. Mike Nofs, who chairs the Senate Energy and Technology Committee, told the audience of over 300.

Valerie Brader, deputy legal counsel and senior policy advisor for Gov. Rick Snyder, said earlier in the day that the crisis “is an example of what happens when the federal government makes [energy] decisions for you.”

Underlying the need for short- and long-term solutions to power generation in the U.P. is the fact that the region has to meet the reliability needs of the Mid-Continent Independent System Operator (MISO). In debate is how the state will get there — and there was no clear roadmap that emerged after Tuesday’s conference.

Experts suggested that a variety of new distribution models will likely surface in the coming months, as will cost-allocation decisions from FERC. Meanwhile, state lawmakers are in the process of revising Michigan’s renewable energy law (which expires next year) and revisiting the state’s 2008 energy choice law that allowed U.P. mine operators to choose electric providers and sent the region into its energy dilemma.

As evidenced by the capacity crowd at Tuesday’s conference, the situation has the attention of all of the biggest energy players in the state. There was an all-hands-on-deck feel at the summit, which included state legislators from both parties agreeing that the proposed cost allocations would be unacceptable.

“This is a top concern of Governor Snyder,” said John Quackenbush, chairman of the Michigan Public Service Commission, whom Snyder appointed in 2011.

While attention to the U.P. continues to grow, it may still be weeks or months before any specific proposals surface for either short- or long-term solutions.

Brett French, external relations manager for American Transmission Co., said Tuesday that a combination of new generation and transmission throughout the U.P. would preserve reliability and provide flexibility and opportunities for growth on the system.

But one plan with major implications is whether Cliffs Natural Resources — the mining company that exercised its energy choice last year — partners with Invenergy to build a cogeneration natural-gas plant for its mining operations. State officials hope a decision is reached on that by the end of the year.

“This is a core piece of the puzzle,” Quackenbush said.

Meanwhile, the state has also requested that any cost increases be delayed beyond Dec. 1, which Quackenbush said has a “pretty good chance” of happening.

As for the FERC proceedings, he said the Wisconsin Public Service Commission filed a request earlier this year with FERC that could change the way costs had traditionally been allocated between the two states, “In an attempt to overthrow decades of precedent. It’s a complete departure on how we’ve allocated costs since 1940.”

The System Support Resource agreement originally had Wisconsin residents paying 92 percent of the costs to keep Presque Isle open, at $4 million a month. Requests before FERC, in which the MPSC has intervened, would have U.P. residents paying 99 percent of what could increase to $8 million due to pollution control measures.

Brader said a FERC decision approving 99 percent of the costs going to U.P. ratepayers would set legal precedent. But generally, Brader said the state is arguing that cost allocation decisions should be made on the state, not federal, level.

On another front, Snyder and the Attorney General’s office filed a protest last week against the proposed merger of We Energies’ parent company, Wisconsin Energy, and Integrys, claiming that it would give the entities too much market power. Brader on Tuesday called it a “fatally flawed” proposal that “has the potential to negatively impact ratepayers.”

“We believe, fundamentally, that the best choice is to keep a major source of generation [in the U.P.],” Brader said. “It’s by far the most cost-effective. We think that will help reliability more than becoming a transmission-only solution. This is the right answer long-term for economic development in the U.P.”

That will likely be a mix of natural gas and renewables. The latter of which would be helped by biomass, which helps address reliability issues because it is “callable,” unlike wind and solar, she said.

Brader said that another of the long-term solutions the Snyder administration hopes to see is better electricity connection between the Upper and Lower peninsulas. MISO combines the U.P. with most of Wisconsin, while the rest of Michigan is treated as a separate zone.

Being in different zones of MISO is the reason why only U.P. customers face potential cost increases and not all Michigan residents, Quackenbush explained.

“It doesn’t mean zones can’t change,” Quackenbush said. “It could result in better connections between the two peninsulas.”

Brader added: “Ultimately, it makes sense for Michigan to think of itself as one energy market instead of two.”

Doing so would mean new generation closer to the Straits of Mackinac, making it easier to connect the two sides, Brader said: “Long term, the best idea is to unite Michigan.”

Editor’s note: This is the fifth in a series of stories about the energy challenges facing Michigan’s Upper Peninsula.