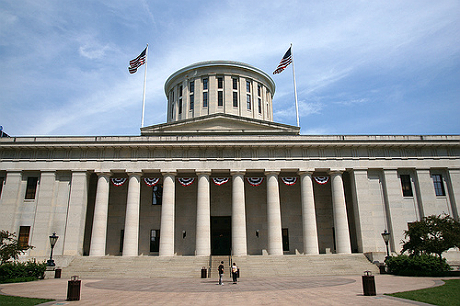 Upcoming meetings of Ohio’s Energy Mandates Study Committee will be open to the public, but the extent to which the public will have a voice in the proceedings remains to be seen.

The committee was established by Senate Bill 310, which temporarily freezes and substantially modifies the state’s renewable energy and efficiency standards. It is tasked with studying the results of those laws and making recommendations for future energy policy.

Various reports document economic benefits from the standards and show their popularity with Ohioans. Nonetheless, critics note that the Ohio legislature disregarded much of that evidence when it passed SB 310 earlier this year.

While the committee is required to look at both the costs and benefits of the standards, nine of the 12 committee members voted for SB 310, which has already rolled back some of the laws’ provisions. That and other factors raise concerns among advocates that the process is weighted to achieve an outcome favorable to the state’s fossil-fuel interests.

All except Peterson are on the Ohio Senate’s Public Utilities Committee. Peterson sits on the Energy and Natural Resources Committee, along with Balderson, Hite and Cafaro.

All six are currently on the Ohio House’s Public Utilities Committee.

Committee meetings have not yet been scheduled, but will “definitely be open to the public,” said legislative aide Rachael Carl in Stautberg’s office. Stautberg will likely be replaced after his term concludes at the end of December.

The committee will likely hear testimony and may review additional materials, Carl added, although the scope of that review has not been determined.

‘Wise not to reinvent the wheel’

Despite any past actions, SB 310 requires the committee to consider both the benefits and costs of Ohio’s renewable energy and energy efficiency standards. Supporters of the standards say the laws have clearly saved Ohioans money.

“The study committee would be wise not to reinvent the wheel and review the reams of information at the [Public Utilities Commission of Ohio] on the cost-effectiveness of these programs,” said Samantha Williams at the Natural Resources Defense Council.

Tom Johnson, who chairs the PUCO, sits on the committee but has no vote. He “anticipates offering technical expertise to the committee whenever possible,” according to PUCO spokesperson Matt Schilling.

“Our hope is that the committee makes use of the thousands of pages of publicly-available utility findings that document just how beneficial energy efficiency has been for Ohio,” said Williams. “Energy efficiency programs run by AEP, Duke, FirstEnergy and DP&L have collectively saved over $1 billion to date on Ohioans’ energy bills. Unfortunately, this information was brushed aside when SB 310 was passed.”

“This study committee needs to study the information that our regulators have already reviewed and reached conclusions on,” agreed Dan Sawmiller at the Sierra Club’s Beyond Coal program. “These cases include studies on the potential for energy efficiency, the costs and benefits of these programs, the job creation associated with the programs and other societal benefits.”

Although no one from the utilities testified in hearings on SB 310, FirstEnergy’s spokespeople have previously argued that the standards suppress electricity demand. By definition, reducing the need for electricity is the goal of the energy efficiency standards.

FirstEnergy has also criticized the PUCO’s cost-benefit calculations for taking a long-term view.

“The total resource cost test [used at the PUCO] is a best-practices testing format used throughout the country to evaluate energy efficiency programs,” Sawmiller explained. Moreover, he continued, Ohio’s electric industry “is totally based on forecasts. For example, look at their coal plant bailout cases pending before the PUCO now, which forecast out more than 15 years.”

“The committee members should recognize that saving money on our monthly bills through efficiency and developing cleaner sources of energy are good for Ohio and overwhelmingly popular,” Sawmiller stressed.

Recent polls confirm that popularity. For example, a 2014 poll by Public Policy Partners found that more than 90 percent of Ohioans want the state to invest in energy efficiency, and two-thirds would prefer their utilities to replace coal-powered electricity with clean energy sources.

And last year, the Yale Project on Climate Change Communication reported that 59 percent of Ohioans want utilities to provide at least 20 percent of their energy from renewable sources, even if bills were higher.

“Investing in clean sources like wind, solar and energy efficiency can help reduce the amount of harmful emissions of toxic pollution and reduce our contribution to climate disruption,” Sawmiller noted.

“Energy efficiency is cheaper than any other source of electricity,” Sawmiller added. “The cheapest power plant for Ohio’s electric customers is the power plant we don’t have to build because we’re using less electricity and saving money.”

Williams also noted that “efficiency and renewables will get Ohio far down the road to meeting its 2030 carbon reduction target” under the EPA’s proposed Clean Power Plan.

And in testimony on SB 310 earlier this year, Ohio Consumers’ Counsel Bruce Weston urged that any study committee should also scrutinize related issues adopted in 2008 “that tilt the balance of ratemaking in favor of Ohio’s electric utilities and against Ohio’s electric customers.”

Substantial parts of this information were already available and discussed in testimony before the Ohio legislature’s utilities committees when they considered SB 310 earlier this year.

Materials from People for the American Way and the Center for Media and Democracy also show that at least seven of the committee members are or have been members of ALEC, the American Legislative Exchange Council. Funded primarily by corporate interests, ALEC actively pushes for the repeal of renewable energy standards.

That group with ties to ALEC includes board of directors member Bill Seitz (R-Cincinnati), several other Republicans, and Democrat Stinziano.

Seitz tried to repeal Ohio’s renewable energy standards entirely in 2011. In 2013, he sponsored SB 58 to cut back the standards and then cosponsored SB 310 after it added key provisions from that earlier bill.

Beyond this, SB 310 sponsor Balderson was a keynote speaker at a rally this summer showing support for the coal industry.

And while Cera voted against SB 310, he has said he wants “to make sure” that both the Sammis and Cardinal coal plants stay open to produce “reliable coal-based electricity.” FirstEnergy and AEP want the PUCO to require all ratepayers in the respective distribution areas to guarantee sales from those and other coal plants

Also, the Ohio Secretary of State’s online records and Project Vote Smart show that Ohio utilities and companies in the fossil fuel energy business have given thousands of dollars in campaign contributions to most of the committee members over the last five years.

Reports show that FirstEnergy has donated to 11 of the 12 voting committee members. American Electric Power (AEP) has given to at least nine members’ campaigns. Duke Energy and Dayton Power & Light (DP&L) have also given money.

Indeed, the state’s four utilities alone have given more than $1.3 million to current Ohio legislators since the state’s renewable energy and energy efficiency standards were adopted in 2008, according to a report from Innovation Ohio.

Donations to individuals make up a small minority of those lawmakers’ total contributions, with funds from state party committees often outstripping direct giving from any industrial sector. Yet the donations represent a substantial investment in the political process.

Nonetheless, advocates ask the committee members to give fair consideration to all the evidence supporting Ohio’s energy efficiency and renewable energy standards.

“The record is very clear on the benefit of these programs, and the study committee will reach that conclusion if they conduct a fair and detailed review,” said Sawmiller.