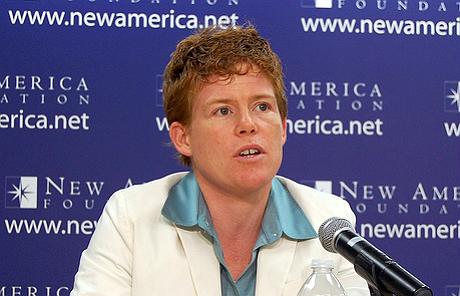 (Photo by the New America Foundation via Creative Commons)

Entrepreneur and policy expert Dr. Holmes Hummel says cleantech can thrive in the U.S., but it still faces formidable obstacles.

Those include a lack of research support and a market that heavily favors the status quo. But Hummel believes those barriers can be overcome.

Her wide-ranging career includes serving on the Cleantech Open Board, which helped sponsor the recent Midwest Innovation Summit in Minneapolis, where she gave the keynote address. Hummel also is on the Global Advisory Committee of Cornerstone Capital Group, a leader in sustainable investment and finance.

Hummel served as the senior policy advisor in the U.S. Department of Energy’s Office of Policy & International Affairs from 2009 to 2013. She spoke to Midwest Energy News prior to her talk.

What about the problem of finding venture capital in the heartland? Everyone seems to think all the money is in Silicon Valley.

There are too many people who are successful without moving to Silicon Valley for that to be true.

Bloomberg’s New Energy Finance publishes data that gives you the scale of investment in the clean energy sector. In the early stages of [clean tech] investment the ratio of public investment in research and development to private venture capital is four to one. So all the money you thought was available in Silicon Valley for clean energy is dwarfed by public sources of investment and corporate R&D investments in technology development.

Doesn’t government funding for clean tech waver substantially depending on who is in office?

Federal investments in energy research and development remain fairly steady, and there has been bipartisan support for that investment, but the level remains too small for us to capture the full potential of the space. The Clean Energy Ministerial raised this issue again in 2013, and the participating countries pledged to raise the level of public funding in R&D. The agency assesses those levels, and they find annually governments are under-investing.

For clean tech entrepreneurs what are the challenges?

Being an entrepreneur is challenging no matter what field you’re in. Clean energy entrepreneurs face an additional challenge of fierce competition from incumbents.

The energy sector in the United States is characterized by monopolies in the electric power sector and very strong concentration in the liquid fuels market. These incumbents have repeatedly demonstrated an ability to discourage competitors.

Where does that leave innovators?

Entrepreneurs have to deliver to the market solutions so compelling and a business model so well constructed that they can withstand the pressure from incumbents.

Policymakers at the state level are given a tremendous opportunity to shape market conditions. In the aftermath of debates in Congress in 2007, 2009 and 2010 over energy and climate policy, what is clear is that states have a leadership opportunity. The Clean Power Plan proposed by the president in June of this year underscores that fact by calling on states to develop plans to decarbonize the power sector.

What happens to states who may have backtracked on energy efficiency goals?

The actual cost of carbon pollution is not zero, yet everyone producing carbon pollution is paying nothing for it. That systemically disadvantages competitors in clean energy markets who compete against incumbents that are getting a massive public subsidy because they pollute and do not pay the cost of it.

What should the cost be?

Currently the cost of carbon dioxide pollution to society is assessed at the federal level at $40 or more a ton. There are utilities in the Midwest that on average produce one ton of carbon dioxide pollution for every one megawatt hour of electricity. The ballpark value of a megawatt hour in the wholesale markets is a $40, which means these firms are essentially producing negative social value before they even start paying their private costs.

That observation is a compelling rationale for addressing the need for pricing of carbon in a sector that’s distorted by externalities and public subsidies to polluters.

What should be done about polluters?

How you address the public subsidy is worthy of public debate. The idea that the price of carbon is zero is obviously incorrect, so there does remain a compelling and unanswered question as to what is that cost and how will it be collected.

Even though California and the New England states have regimes moving ahead with carbon costs, none are approaching the fraction of the social cost of carbon assessed at the federal level. For example, the states participating in the Regional Greenhouse Gas Initiative see a carbon price of closer to $2 a ton.

What should it be?

What we know is it is not zero. The private sector is still competing under conditions where the cost of carbon pollution is effectively zero, and for sure, that’s too low.

Where does the larger business community stand in all this? They seem against a carbon tax.

Every year a large portion of the top 1,000 companies participate in the Carbon Disclosure Project. In 2013 there was a report that showed a large number were applying shadow costs of carbon to their own operations, including Chevron and Exxon.

I wonder how much of the opposition is projected opposition. America’s political economy allows a fair amount of interference from people who project claims that are unfounded.

But some businesses are against any kind of tax, right?

The concern some businesses have about their competitive disposition if they were made to take responsibility for the full costs of carbon are projected by some on to a far larger portion of the American economy than would be affected.

We have a pay-to-play political system, and if you want to see that in action just look at the lobbying expenses of those who would be impacted by climate legislation.