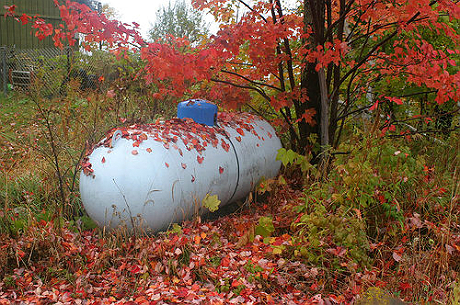 A propane tank at a home near Baraga, Michigan. (Photo by hyperboreal via Creative Commons)

Propane users, as was apparent during last winter’s price spike, can get hit by a double-whammy.

“On the one hand, you have to pay more,” said Andy Johnson, director of the Winneshiek Energy District in Decorah, Iowa. “On the other hand, you have no help.”

Customers of natural-gas and electric utilities typically get that help in the form of ratepayer-funded efficiency benefits. With the exception of a few New England states, however, efficiency benefits for propane customers usually are modest, at best.

Compounding that is the fact that propane heating usually costs at least twice what natural gas does.

The higher cost of propane looms particularly large in the Midwest, where it plays a more prominent role in heating than it does in the nation overall.

In Iowa, the Winneshiek Energy District has added to its efficiency services with an initiative to help propane-dependent households avoid the impact of sudden price spikes.

“Most of our rural homes are old and less efficient than our urban homes,” Johnson said. “People on propane are more and more aware of their energy costs. Even without last year’s spikes, customers on propane are realizing they are paying more for heat and hot water than their natural-gas counterparts in town.”

Johnson said that his Green Iowa Americorps team has been to several propane homes, and that “of our sign-ups for the next couple weeks, at least half are propane users.”

The district’s energy-planning services, which are free, can include a blower-door test and infrared photography to indicate areas of air leakage. The district then provides what Johnson calls “weatherization light,” including weatherstripping, air sealing and high-efficiency light bulbs. The team also advises homeowners if they need to seek out a weatherization contractor.

The Iowa Propane Gas Association offers rebates for Energy Star rated equipment — $250 for a furnace and $150 for a water heater – with funds collected from propane dealers, who are required to kick in one tenth of a cent per gallon of propane sold.

The funds available vary from year to year, and typically are not enough to meet demand, according to Deb Grooms, speaking for the Iowa propane retailers’ group.

“Compared to gas customers, propane customers have had very little available to them,” Johnson said. “They are often told the funds are all gone. If you’re a gas customer in town, and you want to do insulation, you’re never told the funds for that are gone.”

Johnson maintains that efficiency among the propane population should be addressed on a broader scale.

“We’re more and more talking to legislators. We hope to stimulate conversations,” he said. He doesn’t anticipate any legislation in the upcoming session, however.

Propane users are “quite frankly a vastly under-attended area of efficiency potential,” agreed Marty Kushler, a senior fellow specializing in utility efficiency programs for the American Council for an Energy Efficient Economy (ACEEE).

“This would be a good area for policymakers to be thinking about; ‘What can we do to improve things in this area?’ ”

Although propane efficiency gets little attention in the Midwest, that is not the case in New England. Vermont, Maine and Massachusetts provide efficiency benefits to propane customers. And the reception in Vermont is usually warm, especially this time of year, according to Kelly Lucci, spokeswoman for the Vermont Energy Investment Corporation, also known as Efficiency Vermont, which administers the efficiency benefits.

“There’s definitely a Yankee thrifty culture,” she said. “People don’t like spending if they don’t have to.

“Last year there was quite a spike in the cost of propane. We heard from a lot more people who were interested in doing whatever they could to insulate themselves from that price spike.”

The program in Vermont, where about 15 percent of households use propane, starts with an energy audit and blower-door test. Applicants who work with certified contractors, and who do the improvements recommended by the administrators, can receive a subsidy of up to $2,100.

“That can make the difference in whether someone decides to move forward or not,” Lucci said.

Coming up with a way to fund efficiency benefits for propane and heating oil can be tricky, since those fuels are not regulated by state utility commissions the way natural-gas and electric companies are.

Efficiency Vermont gathers its funds from two sources. It bids out to the regional grid operator any energy saved through efficiency improvements. It also earns revenues by selling the right to generate carbon dioxide in New England’s regional cap and trade marketplace.

One obstacle to broader adoption of propane efficiency benefits, ACEEE’s Kushler said, is that, “There’s no regulatory authority that says [a propane dealer] can capture those costs. If one company goes out and weatherizes a home, another company that didn’t pay that cost might try to take that customer.

“Legislatures presumably could approve those requirements, but it’s almost never done. It’s politically difficult. It’s easier to do with regulated utilities because the state is already heavily involved in determining their revenues.

“There’s definitely a public-policy interest in improving efficiency of propane use. But it’s a very challenging institutional structure to try to get at it.”

The American Council for an Energy Efficient Economy is a member of RE-AMP, which also publishes Midwest Energy News.