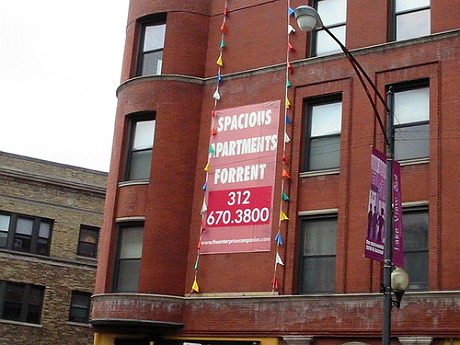 In Cook County, which includes Chicago, 41 percent of households are renters. (Photo by sabrina via Creative Commons)

Making the case for energy efficiency investments seems relatively straightforward for homeowners who will reap the benefits directly in lower utility bills. But for rental, multi-unit buildings where landlords pay for infrastructure and appliance upgrades while tenants pay all or most of the utility bills, it’s much more complicated.

This situation is referred to as a “split incentive,” where the party making the investment won’t directly reap all or any of the financial benefits.

Landlords who don’t live in a given building also don’t have the personal incentive of seeking a more comfortable dwelling free of drafts and temperature swings.

But energy efficiency measures like insulation, new furnaces, smart appliances and efficient lighting do pay off for building owners, a message the Chicago-based group Elevate Energy is working to convey statewide. Elevate Energy has a program specifically to educate multi-unit building owners about energy efficiency and assist them with free energy audits and advice on contractors and upgrades.

Multi-unit rental buildings house a big part of the population in cities like Chicago. In Cook County, which includes Chicago, 41 percent of households are renters, and the majority of those earn less than half the median area income. The proportion of renters in the Chicago area increased by about 10 percent between 2007 and 2011, likely related to the economic crisis and waves of foreclosures.

Elevate’s Energy Savers program was created in 2008 as part of a MacArthur Foundation initiative, The Preservation Compact, focused on affordable housing; though it has since expanded to also include higher-income buildings. Elevate Energy also does other outreach work around energy efficiency and the smart grid, including as a member of the Illinois Science & Energy Innovation Foundation (ISEIF),

For cash-strapped low-income renters, energy cost savings they see because of landlords’ efficiency investments are a boon, allowing them to direct those funds to crucial costs like health care and food.

Elevate spokesperson Stephanie Folk notes that weatherization and other investments often mean more desirable housing that translates to lower tenant turnover, a big plus for owners. Landlords also stand to save money from utility bills for common building areas or in cases where they pay for heat or other portions of the utility cost. Elevate also works with public housing authorities, which typically cover all or part of utility bills for residents. And energy efficiency upgrades can also mean lower maintenance costs for landlords, especially in terms of new appliances like more efficient furnaces and hot water heaters.

In three buildings owned by the affordable housing developer Bickerdike Redevelopment Corporation on the west side of Chicago, investment in air sealing and roof cavity insulation led to Bickerdike getting 19 percent savings on gas bills from 2011 to 2012 and a 10 percent overall reduction in utility expenses. The savings of $12,624 is equal to 17 months’ rent for a unit or 15 months’ maintenance costs in one building, according to an Elevate case study.

More efficient systems also typically mean greater comfort for tenants, who often find it hard to keep their homes at a stable and uniform temperature in old buildings.

Weatherizing and installing new furnaces reduces the risk of fires caused by space heaters, Elevate notes. For residents who are living on the edge economically, lower utility bills may be the key to avoiding shutoffs that result in risky use of candles, space heaters and ovens for heat and light.

“Tenants find the buildings are a lot more comfortable – less drafty, warmer during winter, cooler during summer,” said Folk. “A lot of buildings have issues with heat unevenly distributed. In old buildings with radiators, some have windows open because it’s so hot, others can’t get enough heat. But if you balance your system properly you can distribute heat evenly. And happier tenants with more comfortable apartments actually make things easier on the landlord.”

Bickerdike asset manager Michael Burton is quoted in the report saying that after upgrades tenants are more likely to pay their rent on time, and tenants are able to invest their own utility savings in other household necessities.

“We have a double bottom line of creating financially sustainable projects and serving low-income families who have limited means to pay rent,” the report quotes him saying. In all Bickerdike has improved efficiency for almost 300 units in conjunction with Elevate Energy.

Often for government housing authorities or owners of tens or hundreds of buildings scattered across a city, the logistics of energy efficiency upgrades are more of a roadblock than the cost. That’s where Elevate’s hands-on advising and energy audits – making clear what should be done – are a major driver of change.

“The barriers are lack of information about how to go about making the right improvements so they will really save money, and where to find the best contractors,” said Folk. “Also challenges with financing. We put together a program to help address all those barriers.”

Elevate’s Energy Savers program provides the energy audit and also reports on energy savings once changes have been made. For example, thermal imaging at the Bickerdike buildings helped quantify how much a new furnace would save on heating. Elevate doesn’t actually fund upgrades, but it works with the Community Investment Corporation which provides financing.

Bryan Pritchard is president of the firm Tricap Chicago LLC which owns numerous 30- to 100-unit middle-market rental buildings spread across the entirety of Chicago. He’s made energy efficiency upgrades over the past few years at most of his buildings, including with Elevate and through the utilities People’s Gas and ComEd’s programs offering incentives for efficiency, as part of their state mandate to reduce demand.

Pritchard has done major overhauls at two buildings in response to audits by Elevate. At most of this buildings, he says investments “have to do with light bulbs, radiators, small modifications, steam pipe insulation, the low-hanging fruit.”

While many people immediately think of windows when they think of efficiency upgrades, Pritchard noted that windows installed within the last 25 years are typically aluminum and vinyl, double-paned and relatively efficient, so there are not great benefits to be gained with replacement. Sealing around such windows has a greater proportional pay-off. Folk noted that insulation is often the most important thing a building owner can do to improve efficiency, especially in Chicago where many buildings are older and not well-insulated. But Pritchard said insulating is often not realistic.

“To go into an occupied apartment building and start ripping the walls out becomes really difficult to coordinate with our tenants and expensive, most of the time we don’t do that,” he said, except in concert with other crucial repairs on ceilings or exterior walls.

Proponents note that energy efficiency investments in rental buildings have larger societal benefits that don’t directly affect the owner or the tenants but are significant for the greater good. Energy efficiency means less gas and electricity use which translates to less carbon dioxide released, helping to curb global warming. It reduces the burden on utilities’ infrastructure and services, and on power plants. And energy efficiency upgrades often create local jobs, for instance in installing insulation, new windows or new appliances.

Pritchard said that “having personally done the math,” he knows efficiency makes financial sense. And, “By and large people are good citizens as well, we know that continuing to use energy unfettered is not good for the planet.”

The ISEIF is a member of RE-AMP, which also publishes Midwest Energy News.