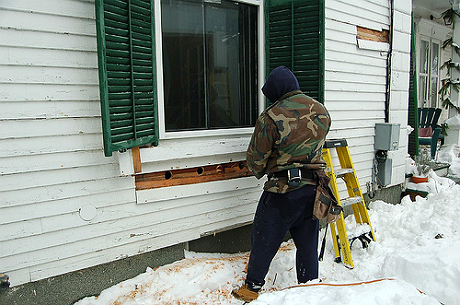 (Photo by jdickert via Creative Commons)

Investments in those programs have been producing $2.51 in savings and other benefits for every $1 they cost, reports the study from Policy Matters Ohio.

Yet while Ohio’s energy efficiency standard had been increasing private spending on the programs, changes under Senate Bill 310 threaten to severely limit those investments, the study says.

The law, which became effective this fall, freezes for two years any increases in the state’s energy efficiency and renewable energy targets, while also weakening the standards. Meanwhile, a study committee is considering the future of the standards after the two-year freeze.

Some state legislators and utilities have said they want to eliminate any increases in the energy efficiency standard altogether.

“Heat and power are basic necessities, and we all need both,” Woodrum said.

For more than 300,000 Ohio households, energy costs alone exceed 30 percent of annual income, according to the report. About 1.4 million households—roughly one in three—pay more than 30 percent for both housing and utilities.

Many of those homes lack weatherization or other energy efficiency measures. Because inefficient homes waste energy, their bills are higher than they could be.

“For families on tight budgets, energy efficiency measures can be the difference between putting dinner on the table or going to bed hungry,” said Brian Kaiser, Director of Green Jobs and Innovation at the Ohio Environmental Council.

“For elderly Ohioans living on a fixed income, a higher energy bill could mean cutting back on medicine, or skipping a visit to the doctor’s office,” Kaiser added.

Households might seek help from government programs or utility companies. Some programs reduce outstanding bill debt. Others limit the amount of future bills to a smaller percentage of income.

Yet while those programs can keep the lights or heat on in the short run, they don’t solve the problem of wasted energy.

For OPAE’s member agencies’ clients, those savings are equivalent to roughly a month-and-a-half of electric bills and two months of natural gas bills.

“That money matters to our clients,” stressed Rinebolt. “Our average client has an income below 100 percent of the federal poverty line. A majority of them have an elderly or disabled person in the household.” Many other homes have young children.

“We are really targeting the poorest of the poor and the most vulnerable,” Rinebolt added.

“There’s a health aspect to what we do, along with the energy savings,” Rinebolt added. Weatherization and efficiency audits can address issues with mold, poor circulation, or other issues that aggravate asthma and other problems.

The public at large has a stake in low-income weatherization programs too, Woodrum noted.

“It’s not necessarily in the interests of the utility companies to reduce demand for their services, but in the end we’re going to pay for it one way or another,” she said.

When public assistance programs provide funds, taxpayers ultimately wind up footing the bill. Or, if a utility can’t get full payment on bills, other ratepayers eventually make up the difference.

“The utility doesn’t just say, ‘Oh well, we didn’t get that money,’” Woodrum explained. “They don’t just soak up all costs. All costs are turned around and put on the ratepayers.”

“This is a product of the way energy markets are structured,” she noted. “You essentially have monopolies that are regulated.”

Cutting energy waste reduces that burden on the rest of the ratepayers, Woodrum said.

Like energy efficiency programs in general, low-income weatherization also limits total demand on the system. That lower demand “also saves money for the rest of us because we don’t have to build expensive new fossil fuel plants,” noted Kaiser.

The job market benefits too, Woodrum noted. “For every 1 million invested in low income weatherization, 52 direct jobs are created,” she said. “And they are decent paying.”

The Policy Matters Ohio report shows county-by-county average wage information for low-income weatherization jobs throughout the state. In almost all cases, wages are well above the then-prevailing minimum wage.

Yes as successful as low-income weatherization has been, programs face problems.

But now, she says, SB 310 freezes and substantially modifies Ohio’s renewable energy and energy efficiency standards while an Energy Mandates Study Committee reviews them and “determines whether to eliminate them altogether.”

“If that happens, the freeze and the future elimination would result in a $300 million estimated loss in utility investments in low-income weatherization over a 10-year period,” Woodrum reported. “That’s enough to weatherize about 50,000 homes.”

Federal funding levels for government assistance programs have dropped recently too, the study reports. It recommends a return to previous levels under the American Reinvestment and Recovery Act of 2009.

The report from Policy Matters Ohio is “more proof that Ohio’s efficiency policy is working,” said Samantha Williams, an attorney with the Natural Resources Defense Council. “But just as we’re heading into the winter heating season, the two-year freeze is about to take effect.”

“The energy efficiency policy needs to be reinstated so that Ohioans don’t go another winter without the opportunity to cut their energy costs,” Williams continued. “And Policy Matters’ report underscores this fact.”

“The study shows we should be doing more to waste less energy,” Kaiser added. “The bottom line is weatherization works.”