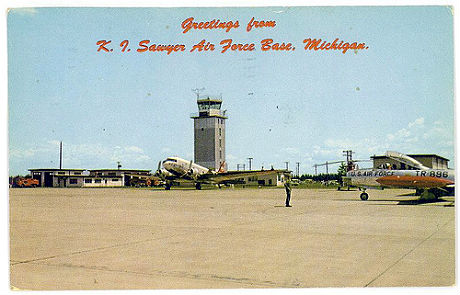 A postcard from the now-closed K.I. Sawyer Air Force Base in Michigan, which will be home to a new biomass plant. (Image by Donald Harrison via Creative Commons)

Developers from metro Detroit have plans to build a $100 million, 34 MW biomass plant in the central Upper Peninsula, about 20 miles south of an aging coal plant that is the ongoing focus of the region’s energy crisis.

The company building the plant, Marquette Green Energy LLC, says it would run on a combination of biomass and tire-derived fuels and a smaller amount of natural gas to start. The developers say it’s a step forward as the region scrambles to figure out how to avoid major rate increases in the short term and build new generation for the long term.

“I call it stealth development,” said Barry Bahrman, a partner in the project and a fifth-generation Upper Peninsula native. “It’s developed to a point now when we can let people know there’s part of an answer in place. … Local generation is what the U.P. needs.”

The project has received an air quality permit from the Michigan Department of Environmental Quality, which Bahrman said makes it the first tangible generation project to surface since the Presque Isle Power Plant closure started making headlines.

The combined heat and power plant would be built on 21 acres at the former K.I. Sawyer Air Force Base, a decommissioned base and unincorporated community near the town of Gwinn. The site was formerly used as a heat plant on the base. Of the 34 MW capacity, 26 MW will be deliverable to the grid.

The group is in the process of applying to the Mid-Continent Independent System Operator (MISO) to connect with the local transmission system. Developers say they also have a round of local zoning and building approvals to come. They hope to start building in the first quarter of 2015.

Stewart Harrison, another partner in the project, said the location has “significant access” to roads, rail lines and natural gas. He also cited the nearby Michigan Renewable Carbon biomass production facility as a potential source for fuel.

“It’s got a lot of amenities that fit into the picture,” Harrison said.

He added that the plant will be “totally vertically integrated and closed loop,” with a sustainable supply of woody biomass resources coming in from a variety of suppliers. He declined to give specifics about where the fuel source would come from, saying they are still in negotiations.

“We have the connections on the biomass and fuel side,” Harrison said. “We’re confident we can satisfy the needs of the plant. It’s a big beast and it will take a lot of tons, but I believe they’re available.”

Marvin Roberson, a forest policy specialist with the Michigan chapter of the Sierra Club, said land-use concerns arise when talking about large-scale biomass plants. He said to run a plant at 26 MW would require 260,000 acres of dedicated forestland, which includes standing timber and residual wood, if it were sourced by one area. That number decreases as biomass comes from other sources, such as construction waste.

“There’s simply no way” it could be done without relying on other sources, Roberson said.

In an April op-ed in the Detroit Free Press, Roberson argued that biomass as a statewide fuel source isn’t realistic.

“Power derived from cutting and burning standing timber cannot be any significant part of the solution to electrical needs because there simply aren’t enough trees in Michigan,” he wrote.

“We don’t oppose the concept of biomass, but we need to look at it realistically,” he said in an interview. “You don’t want to build a 200 MW power plant that then creates demand for biomass that isn’t reasonably met and that isn’t cutting into other forest users’ supply.

“It seems real tempting for folks to say the U.P. has a whole bunch of wood. When you start looking at the actual numbers, there isn’t as much as it looks like.”

‘We have all the renewables we need’

Meanwhile, a coalition of renewable-energy advocates based two hours northwest of Gwinn in the Keweenaw Peninsula have their own local renewable energy plan in response to Presque Isle’s eventual closure. And it also depends on biomass for base load power.

Released to the public today, the Keweenaw Renewable Energy Coalition’s Generation Plan lays an energy roadmap for two U.P. counties that, in later phases, could be adapted to the entire peninsula, members say. It gives details about where biomass resources could come from and where wind and solar projects could be sited. Last week, the group delivered the plan to top state officials and members of Congress.

KREC Treasurer Sam Lockwood said that the two-county area northwest of Marquette could generate 18 MW from biomass, backed up by another 41 MW from wind and solar to meet the needs of the 38,000 people living in Keweenaw and Houghton counties. The report budgets nearly $140 million for the projects (before federal renewable energy rebates), but Lockwood said it would provide energy independence over the next 20 to 40 years.

“We have all of the renewables we need for going independent of an out-of-state transmission model or a retrofit of Presque Isle,” Lockwood said. “We can roll out an incremental plan in up to two or three counties at a time.”

He also said Roberson’s op-ed “hurt the initiatives up here” because it was based on biomass needs for the entire state, not just the U.P. Lockwood believes the area has 20 years’ worth of biomass residues on the ground from the commercial logging industry.

“We have the opposite battle Marvin is describing in treeless Lansing,” he said. “Up here, on the local time and size scale, this is very doable.”

Generation proposals will likely trickle in until the end of the year — before a Federal Energy Regulatory Commission decision that could allocate costs to keep Presque Isle open virtually solely on U.P. ratepayers.

The Sawyer and Keweenaw plans are in addition to a possible natural-gas plant being considered by Cliffs Natural Resources, the main energy user at Presque Isle that is considering a plant to service its own needs.

In an area struggling with unemployment and low median incomes, the looming decision that could spike already high rates is coupled with the optimism of economic development (and construction jobs) in building a new energy landscape.