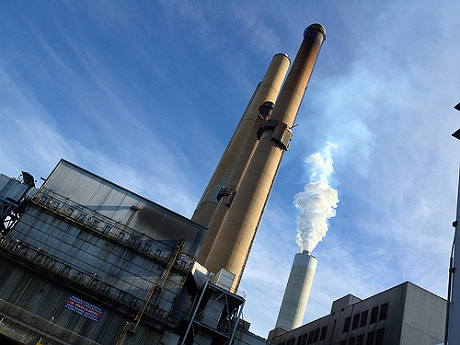 The comments filed with the Public Utilities Commission of Ohio (PUCO) last week claim that many jobs depend on keeping FirstEnergy’s Sammis coal plant in operation. The plant “typically burns between 6 million and 7 million tons of coal per year,” according to Murray Energy spokesperson Gary Broadbent.

The coal company’s comments join a flurry of other support that includes dozens of form letters signed by employees of FirstEnergy’s plants, along with letters from other suppliers and various local governments that talk about the importance of protecting jobs.

Clean-energy advocates question claims in the comments and say they do not justify subsidizing unregulated power plants that can’t compete effectively in Ohio’s deregulated generation market.

Moreover, critics say, workers at noncompetitive power plants and their suppliers would be better served by a forward-looking energy policy that supports and trains workers for fields where jobs are expanding in Ohio.

FirstEnergy’s plan would require its Ohio distribution customers to pay for all the output from the Sammis coal plant, the Davis-Besse nuclear station, and FirstEnergy’s share of two older Ohio Valley Electric Corporation plants, which the utilities would then resell.

FirstEnergy’s filings show that consumers would pay more for the first few years of the plan—presumably because the competitive market price for electricity would be lower than the price paid under the agreement. Afterward, the company claims consumers would save money.

Critics say the plan and similar ones filed by American Electric Power and other utilities run counter to “free market” appeals that the companies have made in the past.

Plants covered by the plans are “old, inefficient and frankly too expensive to run,” said Brian Kaiser, a policy director at the Ohio Environmental Council. “And that’s why utilities are trying to pass the buck. They want ratepayers to prop these plants up.”

“Just a few years ago, these same utilities were begging Ohio lawmakers to be allowed to keep the free market,” Kaiser continued. “And now, when the invisible hand of the market is pushing them aside, they’re coming back and asking for bailouts.”

Under a 1999 Ohio law, the state has a deregulated electricity generation market.

“It’s the wrong policy for these utilities to be buying power back from their unregulated affiliate plants without a competitive bidding process,” said attorney Rob Kelter at the Environmental Law and Policy Center.

“When the state decided that it was good policy to have the utilities spin off their power plants, everybody knew then that there were going to be changes,” said Kelter. “Some of those plants would thrive, and some wouldn’t.”

Dan Sawmiller of the Sierra Club’s Beyond Coal program says FirstEnergy, AEP and other utilities are “clearly attempting to supply a noncompetitive product or service associated with generation in a manner that disadvantages other suppliers and harms the competitive marketplace. In our view, that is illegal.”

Kaiser added, “Why isn’t Americans for Prosperity, or the American Energy Alliance or any of the other groups advocating for a ‘freely functioning energy market’ intervening in these cases to oppose these utilities?”

Many of the comments filed by “various consumers” in FirstEnergy’s PUCO case are form letters that say the signers are employees of either the Sammis or the Davis-Besse plant.

Letters from various suppliers echo the theme that jobs depend on keeping FirstEnergy’s plants open.

“Murray Energy Corporation is a key coal supplier to FirstEnergy’s Sammis Generating Station,” wrote President and Chief Executive Officer Robert Murray. “Many Ohio coal mining and related (eleven to one multiplier) jobs depend on keeping this power plant in existence.”

“We will not speculate as to the jobs that will be lost if the Sammis Generating Station were to cease operating,” stated Broadbent in answer to a request for clarification.

Broadbent indicated the eleven-to-one multiplier for jobs supported by the coal industry comes from a 20 year-old report prepared by Pennsylvania State University researchers for the National Coal Association.

That number, according to Dean Baker of the Center for Economic and Policy Research, “is just absurd.”

“The idea [behind a multiplier] is that the pay in one industry is income for people in other sectors when those workers spend their paychecks,” Baker explained. “Typically we might think the ratio is in the neighborhood of 1.5 to 1.”

Kelter warned against a one-sided approach when looking at jobs.

“You can’t just say if we close a power plant we’re going to lose so many jobs,” he said. That’s because other industries such as renewable energy and energy efficiency create jobs.

Data from the U.S. Bureau of Labor Statistics (BLS) show that coal plant and coal mining jobs together make up just 0.012 percent of Ohio’s total employment.

“The jobs created in clean energies and conservation could certainly be comparable to jobs lost in fossil fuels,” Baker stated.

“In short, I think it’s fair to say the employment impact of reducing or eliminating coal power in Ohio would be very limited,” Baker concluded.

Nationwide, coal power plants and the coal industry were losing jobs well before Ohio utilities filed their purchase plans with the PUCO.

Employment in nuclear plants is down 8 percent from 2009, as is employment in coal, Baker said.

“Employment in fossil fuel plants is down by almost 30 percent from its peak in 2010,” he added.

Nonetheless, being laid off from a power plant or coal job would be “terrible news” for those workers, he said.

The federal American Clean Energy and Security Act of 2009 would have provided millions of dollars for worker transition, Kaiser noted. Senate Republicans ultimately defeated the bill.

Nonetheless, Kaiser said, Ohio policy can and should expand displaced worker programs and provide grants and other support for training in career fields that are growing.

Power plant workers’ skills “would lend themselves really well to a whole variety of careers in the clean energy sector,” Kaiser said, although they could choose other fields as well.

Sawmiller says the companies should treat their employees justly too.

“FirstEnergy and AEP have a responsibility to these workers, families and communities affected by the decision in these cases,” said Sawmiller. “These companies should treat their employees with respect and consideration by developing a responsible transition plan for the workers that honors their union contract and ensures a secure livelihood for workers.”

Instead, the companies “are offering no support for workers other than full approval of their applications, which have an overwhelmingly negative affect on Ohio’s economy as a whole, while polluting our environment and impacting public health,” Sawmiller said.

“Ohio’s electricity customers did not create this situation, and should not be forced to pay for the companies’ mistakes,” Sawmiller added.

Update: As of 2012, Ohio may actually have had more than 31,000 jobs in its “alternative energy economy,” according to a study done for the Ohio Development Services Agency by ICF International and Wright State University. The agency later disputed the report and did not release the results during the recent legislative debates that led to substantial changes to Ohio’s renewable energy and energy efficiency standards.