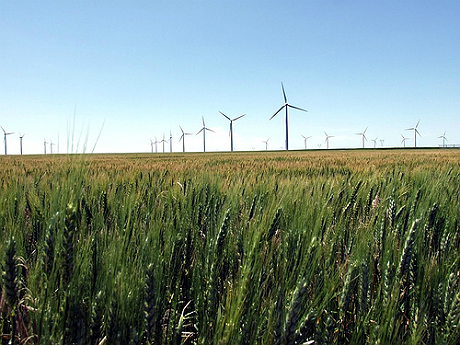 Clean Line transmission projects aim to carry energy from wind farms in rural areas like western Kansas to supply loads to the east. (Photo by Joseph Novak via Creative Commons)

A $2.2 billion project that would connect yet-to-be-developed wind farms in southwest Kansas to the nation’s largest power market is on trial in Missouri this week.

Just to the east, Illinois regulators are poised to decide whether to allow a $2 billion sister project that would link wind-rich northeast Iowa to the same power grid.

But Clean Line’s plan to string hundreds of miles of wire across the Midwest has met resistance among farmers and ranchers, many of whom work land that’s been in their families for generations, and other interests that have fought the company’s efforts to win state approval for the projects (EnergyWire, Aug. 13).

The opposition was on display Monday, when hearings began on Clean Line’s Grain Belt Express project, a 770-mile high-voltage, direct current line from Dodge City, Kansas, to a substation in western Indiana.

The project, which already has approval from regulators in Kansas and Indiana, is being challenged by the politically powerful Farm Bureau and two landowner groups.

The staff of the Missouri Public Service Commission likewise said the Grain Belt application should be denied because developers also failed to satisfy other criteria, including that the line is economically feasible and that it would promote the public interest.

“There is absolutely no evidence that the line is needed,” Agathen said. And if the project is ultimately built, “what we end up with is just a huge transmission line across our state that serves no public purpose whatsoever.”

They quizzed him about the Federal Energy Regulatory Commission’s open access requirement for transmission-owning utilities, suggesting the supposed clean energy project could instead be used to move fossil energy from the controversial Holcomb coal plant being developed in southwest Kansas.

“That strikes me as technically feasible but economically nonsensical,” Skelly responded, questioning why the plant’s owners would pay to transmit power 700-plus miles to a market saturated with coal-fired generation.

No committed users — yet

The Grain Belt project would drop 500 MW to a converter station planned just south of Hannibal, Missouri, near the Mississippi River while delivering 3,500 MW to the PJM Interconnection, which operates the bulk power grid across parts of 13 states in the Midwest and Mid-Atlantic.

Unlike most transmission projects being developed across the Midwest, where costs are broadly allocated across the region, only entities that use the Grain Belt line will pay for it.

Neither wind farms nor utilities have committed to use the line if it’s built — a point opponents have seized on. But Clean Line executives said those commitments will come when the line is fully permitted.

Wind developers, including Santa Barbara, California-based Infinity Wind Power, have indicated strong interest in the project, which they say is needed if the central Plains is to realize its energy potential.

“The Midwest has an abundance of wind energy, but we don’t have the consumers or the marketplace,” Infinity Wind attorney Terri Pemberton said.

Attorneys for landowner groups suggested that the Grain Belt project would have costs, too, including a loss of jobs at coal plants and mines, as well as railroads and barges used to haul coal, if Kansas wind energy displaces fossil generation.

“There are changes taking place in the Missouri generating mix with or without us,” Skelly said.

The potential for wind imported from Kansas to displace coal in Missouri is a reason the Sierra Club has intervened on Clean Line’s behalf.

“Ordinarily, the Sierra Club would not likely take a position on a transmission line except to oppose it,” said St. Louis attorney Henry Robertson, who is representing the environmental group in the case.

The Grain Belt project is one of four long-haul, direct-current lines proposed by Houston-based Clean Line, a company that’s 40 percent owned by National Grid PLC. The others, in various stages of development, seek to tie remote wind-rich areas of the country to population centers to the east and west.

As Missouri regulators continue a weeklong hearing on the Grain Belt Express today, their counterparts in Illinois are poised to vote on whether to grant a certificate for another of the Clean Line projects, the 500-mile Rock Island transmission line that would originate in northeast Iowa.

It is the second time in as many months that the project has been on the agenda for the Illinois Commerce Commission (EnergyWire, Sept. 30).

In a proposed order, an ICC administrative law judge recommended approving a certificate to construct the Illinois part of the project and Clean Line’s preferred route. But the judge recommended denying a request under another section of the state Public Utilities Act, finding the transmission line promotes development of a competitive electric market.

As proposed, the Rock Island project represents a DC transmission line that would carry 3,500 MW of wind energy to a substation just southwest of Chicago. Besides landowners, the line is opposed by Illinois’ largest utility, ComEd.

Clean Line said the Rock Island project would enable development of more than 4,000 MW of new wind generation that could be delivered to Illinois and eastern states with renewable energy standards, and the company is in discussions with 18 wind farm developers in northwest Iowa and the surrounding area that control more than 100,000 acres.

The company just last week filed petitions with the Iowa Utilities Board for issuance of franchises needed to build and operate a transmission line in 16 counties.

Other Clean Line DC transmission projects in development include the 900-mile Centennial West line from northeastern New Mexico to southern California and the 700-mile Plains and Eastern line from the Oklahoma Panhandle to Memphis, Tenn.

In January 2011, Arkansas regulators almost apologetically denied a certificate to proceed with the Plains and Eastern project because Clean Line didn’t meet the “statutory definition of a public utility.”

In response, Clean Line turned to the Department of Energy and Section 1222 of the Energy Policy Act of 2005. The little-known provision would enable DOE to work through a federal power marketing administration and, in certain instances, condemn property required for easements.

Clean Line filed a similar application with DOE for the Grain Belt Express project in 2010.

In a testy exchange during Monday’s hearing in Missouri, Agathen, the landowners’ attorney, repeatedly asked whether Clean Line would pursue federal approval of the Grain Belt Express project if denied by the Missouri PSC.

Skelly said Clean Line’s application for Section 1222 authority for Grain Belt Express is still pending at DOE but inactive. And the company would exhaust efforts to persuade state regulators to approve the project before turning back to the federal government.

“We would look at the no and figure out a way to turn it into a yes,” he said.