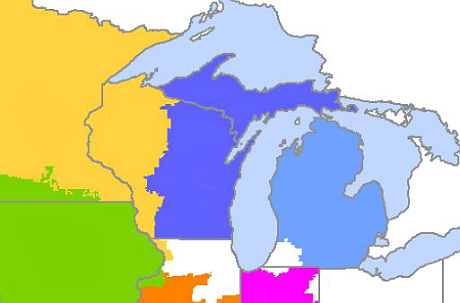 Michigan’s Upper and Lower peninsulas are distinct regions in many ways — from geography to accents to preference for sports teams (“Yoopers” tend to favor the Green Bay Packers, downstaters root for the Detroit Lions).

Michigan also is essentially two states when it comes to energy markets. The U.P. depends heavily on electricity generated in Wisconsin (simply because of geography) with Wisconsin ratepayers picking up part of the tab for powering mining operations and other needs in Michigan.

But the expansion of mining and the uncertain future of the region’s largest coal-fired power plant have lit a new fire under a long-simmering debate about potentially uniting the Upper and Lower peninsulas into one power market and distribution system within the Mid-Continent Independent System Operator (MISO) regional transmission organization.

Currently the two peninsulas are in separate “local resource zones” within MISO, which are used to calculate adequate reliability across MISO’s footprint.

Moving the U.P. into the same zone as the Lower Peninsula could help clarify the state’s energy future and address a brewing energy crisis in the U.P.

Making this move would likely necessitate building more transmission across the five-mile-wide Straits of Mackinac, a costly and complicated undertaking. But it might be worth it, some experts say, to disentangle the U.P. from Wisconsin and to give Michigan more autonomy over its electricity resources.

“Saying the U.P. is an electric extension of Wisconsin has worked well for many years,” said Valerie Brader, deputy legal counsel and senior policy advisor to Gov. Rick Snyder. “But when it comes time for new plans, there is more advantage to the people of Michigan if the determining factors in what is done is in the hands of Michiganders.”

“Michigan’s electric ‘superhighways’ — its transmission system — are a tale of two peninsulas,” Snyder wrote in November 2012 as part of his special message on energy and the environment. “In the Lower Peninsula, the reliability of our electrical superhighway is excellent. It’s a tremendous asset … . But in the Upper Peninsula, it’s very different.”

To meet the needs of further economic development and to rein in high electricity costs in the U.P., Snyder continued, “We need to explore connecting Michigan’s peninsulas electrically. … We need a robust connection that gives us the potential to reduce the cost of moving power around in both places and creates opportunities to improve supply as well.”

Currently, the U.P. and the Lower Peninsula are connected by two underwater transmission lines known as the McGulpin Interface. But fully uniting the two peninsulas electrically would likely require additional transmission. Experts say this is feasible, though not cheap or easy.

“The underwater distance is not too much, but you have to realize any underwater lines end up costing eight to 10 times as much as overhead lines,” said Joydeep Mitra, a Michigan State University professor with the ERISE Energy Reliability and Security research laboratory. “For that five-mile stretch, the cost for a new line could easily be $50 million. But when you’re talking about this kind of expansion, $50 million is not necessarily considered a lot of money. These things are expensive but sometimes they are necessary.”

John Kivela, a state representative from Marquette in the U.P., told a local news station last month that it is “critical” that a deeper connection with the Lower Peninsula be made.

“We’re dependent on another state for our energy, to a degree, and that needs to stop,” Kivela told ABC News 10. “We have the golden opportunity to connect the peninsulas and have an all-Michigan strategy moving forward.”

Connecting the two peninsulas and addressing the current energy crisis in the U.P. would also likely mean more generation needs to be built in the U.P. or near the Straits of Mackinac in the Lower Peninsula.

Currently the Presque Isle coal plant near Marquette in the U.P., owned by Wisconsin-based We Energies, continues to run solely because its energy is needed by mining companies in the U.P.

The plant is not financially viable, and We Energies had sought to close it until MISO ruled that it must be kept open temporarily through a System Support Resource (SSR) agreement, wherein ratepayers cover the costs. The question of who pays to keep the plant running will be decided by the Federal Energy Regulatory Commission, which could ultimately let Wisconsin ratepayers off the hook, with virtually all of the costs placed solely on U.P. ratepayers — even if they are not We Energies customers.

“We’ve been told by MISO we must run the plant,” noted We Energies spokesman Brian Manthey. “We would retire the plant if it wasn’t for the fact that we’ve been told to run it. The bottom line is will there be enough generation and transmission to keep the lights on in the U.P.?”

Manthey said We Energies is interested in building additional generation in the U.P., and the company has had discussions with Snyder’s office, state officials and other local leaders.

“Additional generation is needed to solve the long-term reliability problems in that region,” he said. “Why that’s done, how it’s built, how transmission figures in, is certainly up for discussion and analysis.”

Kira Loehr, executive director and general counsel of the Citizens Utility Board of Wisconsin, said that Wisconsin ratepayers could benefit by being severed from the U.P.

“My preliminary reaction is that it seems to make a lot of sense” to make the change, she said. “It would solve the cost allocation problem we’re all experiencing right now, it would make Michigan responsible for its energy needs instead of Wisconsin being responsible for them. There is a definite feeling of unfairness here in Wisconsin with issues in the U.P.”

Last year, MISO published a study that, among other transmission projects, looked at the economic feasibility of building transmission across the Straits of Mackinac.

Scenarios ranged in the hundreds of millions of dollars. The overall conclusion was that, at least now, the costs for more transmission would exceed the benefits.

Still, Brader says the report did not account for new generation near the Straits of Mackinac and a retired Presque Isle plant, factors that could drive down the costs of connecting the peninsulas.

Wolverine Power Cooperative, for example, has announced plans to build a natural gas-powered plant about 60 miles south of the Mackinac Bridge.

“If those physical factors change, the economics make a tremendous amount of sense,” Brader said. “Then we have a much stronger argument to have Michigan’s energy future determined” within the state.

Jeremiah Johnson, a researcher at the University of Michigan’s Energy Institute, said that while the MISO study may be outdated due to changes surrounding Presque Isle over the past year, it still provides a “helpful methodology” for determining long-term costs.

“The premise is that a better connected system could more effectively use generators and share capacity and reduce production costs in the long run because you’re using the most efficient generators across a larger, more diverse pool,” Johnson said. “I think it warrants consideration, at the very least, to see where the numbers come up.”

While there is mounting support for the concept of uniting the two peninsulas, including from the state’s top elected official, the details of how that would occur and who would pay are far from clear.

MISO is in charge of reviewing transmission expansion proposals, which are typically submitted by transmission companies. But it is not clear what entity or entities would be responsible for launching the process to move the U.P. into a different local resource zone. MISO officials said such a shift would unprecedented.

Experts say the proposal could likely be initiated by a variety of sources, including the state government, a transmission company or a utility. The two main transmission companies serving Michigan, ITC and ATC, declined to comment for this story.

“The problem always with transmission is: Who pays for the expansion?” said James Ault, president of the Michigan Electric and Gas Association.

Complicating the issue, Ault said, is the fact that the areas surrounding the Mackinac Bridge are sparsely populated. “If you’re going to invest that much money in transmission, you need the load to pay for it. If you’re adding the load, who is it serving?” Ault said.

Liesl Eichler Clark is a founding partner of the clean energy policy consulting firm 5 Lakes Energy. She said that after hearing the proposal to combine the local resource zones floated in the past, it remains to be seen whether “new life has been breathed into” the proposal at this point.

“From the Lower Peninsula perspective we want to be as close to our U.P. neighbors as we can, but this does present some challenges,” she said. “It’s likely to be a combination of transmission and generation that will be part of the solution.”

Clark is not convinced uniting the peninsulas is the best solution. If drastic measures are being considered, she muses that building more underwater lines to connect Michigan to wind resources in states further west would be ideal if not currently possible.

“Do we think about the U.P. in terms of greater ties or do we think about the U.P. to a certain extent as an island?” she said, noting that true islands like Hawaii have found creative ways to generate their own energy. “There are a variety of scenarios…We need to make sure we do it in a way that promotes affordability, reliability, and cleaning up the grid (environmentally). Those are the three legs you try to balance.”