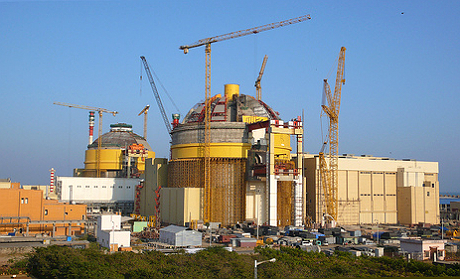 A nuclear power plant under construction in India in 2013. (Photo by IAEA via Creative Commons)

Despite an aging nuclear fleet and slow development of new power plants, two young leaders in the industry recently spent three days in Minnesota working to attract college students to the field.

Their message is that nuclear has a future and that it remains the only real baseline energy available that emits no carbon and largely avoids the vicissitudes of the energy market, something that cannot be said for natural gas or coal.

Minnesota has three nuclear reactors at two facilities which produce 21 percent of the state’s power needs.

Representing Clean Energy America, an organization sponsored by the Nuclear Energy Institute, Don Hackworth and David Boortz spoke at the University of Minnesota and Minnesota State University Mankato. Hackworth is a custom project engineer for Westinghouse Electric Company in Pennsylvania and Boortz is a reactor engineer for Pacific Gas and Electric in the San Francisco Bay Area.

As industry representatives, they are well aware of the concerns people have with safety and costs but believe new designs and innovations are responding to those fears.

Midwest Energy News: What is the state of the industry?

Boortz: It’s growing worldwide, with plants being constructed in China, India, Vietnam and Russia. There are plants under construction in Georgia, South Carolina and Tennessee.

The ones in the South were criticized for being over budget.

Boortz: It’s largely because they were first-of-the-kind projects that always have additional spending. All the challenges those plants ran into were fixed and that knowledge can be used on future plants. We’re taking into account lessons learned in China, too. We’re trying to set an example with these few by having them run safely and efficiency.

What’s different about these plants?

Hackworth: They’re built in a modular fashion, with parts assembled offsite. What we’re learning is that if we can build large chunks offsite we can do the build more quickly and cost-effectively.

What’s the argument for nuclear over natural gas?

Boortz: Nuclear costs are attractive because of its consistency and cost-per-kilowatt. Natural gas is cheap and abundant but the demand for it can grow exponentially. Nuclear doesn’t fluctuate as much. Think of last winter during the vortex, when natural gas was in high demand. We don’t have that kind of problem because we have years of locked-in contracts for uranium.

Hackworth: With all the [new] energy we’re going to need — conservatively a percent a year — for the next 20 or 30 years nuclear cannot alone handle that growth. All forms of energy need to play a role in meeting the goals the EPA (Environmental Protection Agency) has set forth and to keep reducing our carbon.

How does the nuclear industry see the new EPA regs?

Hackworth: There’s countless reports out there that say we can’t meet the proposed carbon reduction rates without nuclear power. It has to be a factor in that design — and not just the output of the existing fleet. Our need for power will continue to grow, especially with new products, like electric cars, and all our electronics.

What’s the deal with these smaller reactors?

Boortz: They produce from 45 megawatts to 250 to 300 MW. There are currently three manufacturers who are big in the “small modular reactor” (SMR) game — Babcock & Wilcox, NuScale Power, and Westinghouse. All are basically condensed or altered versions of reactors that exist today. The refueling, however, is completely different than now and made simpler. The footprint is small and much of it is built underground. Every lesson learned in Fukushima are included in these reactors, with higher requirements for loss of power on site. You can add a second plant to a site as demand grows.

Hackworth: They’re pretty plain. They have no dome, no giant cooling tower. you can drive past and think it’s a prison because there’s a security force there — a very small prison.

How important is carbon-free as a selling point for nuclear energy?

Hackworth: Even environmentalists see it’s not what they fear it to be. It’s better than what we’re doing now with coal plants. And it’s on a tiny footprint compared to wind farms or solar. In South Carolina to generate the same electricity as the new nuclear plant a wind farm would have to span the entire width of the state off the coast. Compare that to the footprint of nuclear power plant and ask which do you want?

What are the challenges moving forward?

Boortz: We need a renaissance in the industry — we need more nuclear physicists, nuclear engineers, nuclear workers. We struggle with the need to extend the life of existing plants and build new plants. Where are all the young minds who are going to run these things? I want to see young people putting their careers in nuclear energy.

Another challenge is Yucca Mountain, which hasn’t opened.

Boortz: We have to acknowledge the best possible path is Yucca Mountain for long-term storage. Onsite storage isn’t optimal, and utilities and taxpayers have paid into this for decades. But this is a political battle.

Is there resistance when you meet with students?

Hackworth: When we talk to people critical of the industry it’s still important because maybe you can get them to at least begin to consider nuclear power as a option in the future.