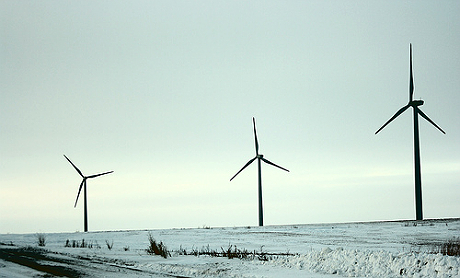 Whether a wind farm is opposed or embraced by neighbors depends a lot on where it is built.

And a new study finds that for rural Midwestern communities that often are confronted with dwindling populations and revenues, wind farms are seen primarily as a welcome economic development — even if developers’ promises don’t completely pan out.

“In other places, you see a lot of opposition to wind energy, and projects are being blocked,” said Jeffrey Jacquet, an assistant professor of sociology at South Dakota State University, and one of the researchers. A study done a couple years ago found that proposed wind farms encountered resistance in about 45 percent of cases, according to Jacquet. In a community on the outskirts of the Twin Cities, he said, people “are vigorously trying to block a wind farm from being constructed.”

It’s more of an exurban community, he said, and people as a result may have “different notions of what land should be used for.”

In an attempt to gauge residents’ views of wind turbines, Jacquet and another researcher from South Dakota State University earlier this year conducted a survey and interviews among residents in a pair of adjoining and sparsely-populated South Dakota counties with two different wind-farm stories.

In Hyde County, one wind-energy developer put up 27 turbines in 2003. In Hand County, British Petroleum planned to build what was rumored to be the largest wind farm in the world, with 1,000 turbines. After erecting 10 turbines in 2009, however, BP pulled out and focused its resources on natural-gas extraction, according to Josh Fergen, a sociology graduate student at the university and one of the researchers.

Fergen wondered if the dashed plan for a huge wind farm would sour the residents of Hand County on the wind industry, as compared to the residents of Hyde County, where a 27-turbine farm was successfully operating.

In both counties, according to Jacquet, people started out with “very positive expectations” about how the wind farms would impact the local economies. As it turned out, their expectations were not met in either case.

“The reality was that jobs weren’t as great as they expected, and tax revenue wasn’t what they expected,” Jacquet said. “However, they still had positive impressions at the end of the day.” The residents of the county where BP said it would build 1,000 turbines had higher expectations that people in the neighboring county. But in the end, he said, they were just as satisfied.

“They see any development as good development,” Jacquet said. “In a lot of rural communities there isn’t a lot of development and people are worried about economic decline and population loss. So maybe it didn’t turn out to be the over-1,000 turbines they projected, but at least they built something and the land was being used for something.”

“We’re looking at counties that are experiencing some population loss,” Fergen added. “This wind energy development provides an avenue for the county and the school district to receive some benefits. Even if it’s not what they expected, it still helps.”

It can pay off for them in another way, in terms of hometown pride, said Fergen, who grew up in South Dakota.

“It helps to put them on the map,” he said. “There’s economic development and then, “Oh, we’ve got a wind farm here.”

In a seeming paradox, those not supportive of wind energy tended to be those who most strongly identified with environmental values.

“At first blush you’d think it would be the opposite,” Jacquet said. The opposition among those identifying as environmentalists confirms research he did earlier in Pennsylvania. Although wind turbines avoid most of the issues associated with fossil fuel use, Jacquet said some people are more concerned about “disruption to wildlife and the natural landscape.”

The research team found that aesthetics enter in in another way. They asked residents if they found the turbines beautiful when in motion, or beautiful when not in motion.

“The ones in motion were found to be much more beautiful,” Jacquet said. “The narrative emerging is, ‘Do you view the landscape as a place of economic productivity? Is that what the landscape is for,or is the landscape more for retaining natural ecosystems and that sort of thing? A lot of people in the Great Plains see the land as a place for producing things. When the turbines are in motion and producing electricity, things are getting done.”

“There is a spectrum of opinion that seems to break down along environmental attitudes and what you think land should be used for. But in general, people seem to be in favor of it.”