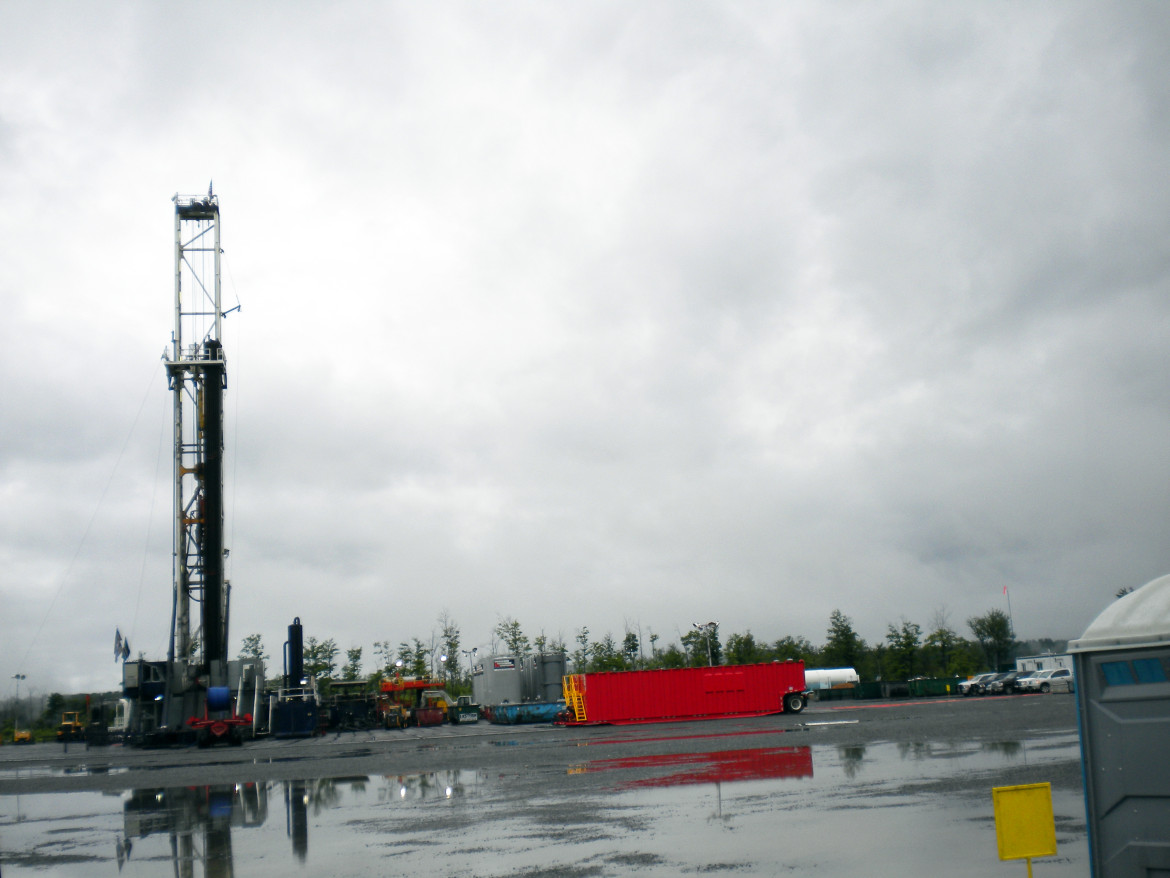 A drilling rig at a Marcellus Shale site in Pennsylvania. Photo by Kathiann M. Kowalski.

The Ohio Senate began hearings this week on a bill that could let oil and gas companies skirt current laws dealing with disclosure of chemical hazards to local communities and water withdrawals from the Lake Erie watershed.

The Ohio House of Representatives passed House Bill 490 in November, and the Ohio Senate could vote on the bill as early as next week. If passed in its current form, the bill could face challenges under federal law.

HB 490 would make the Ohio Department of Natural Resources (ODNR) the main storehouse for oil and gas company filings about the hazards of chemicals used in their operations.

Currently, those companies and many other industrial operations are supposed to provide the information to the State Emergency Response Commission (SERC), as well as local emergency planning committees and fire departments. The requirement stems from the federal Emergency Planning and Community Right-to-Know Act (EPCRA). Congress passed that law in 1986 in the aftermath of the Bhopal factory disaster that killed thousands of people in India.

Under HB 490, the chief of ODNR would put “appropriate” information into an electronic database. ODNR would make the database available to local planning committees and fire departments in case of an emergency.

Critics believe that approach is not enough to protect the public and to comply with federal law. They believe that while a database might help in some cases, companies should still directly provide first responders and communities with the required chemical inventory information.

“The federal law says it has to go to local emergency planning committees,” stressed Caitlin Johnson at the Ohio Organizing Collaborative.

“ODNR is not a first responding agency,” Johnson added. “So therefore that is a violation of the federal law.”

“The notion that the industry is trying to push legislation that would conflict with federal law is ridiculous,” he said. “The Ohio Oil and Gas Association is supporting Community Right-to-Know provisions in HB 490 that will ensure our first responders have easy access to information that complies with or even exceeds federal law.”

“ODNR’s track record is such that they haven’t done this in a timely manner in the past, and we think this should stay with the agency [SERC] that does this for all other industries,” said Melanie Houston at the Ohio Environmental Council.

This summer, for example, communications problems delayed local firefighters’ ability to respond to fires at a well pad in Monroe County.

As a separate matter, cellular coverage is spotty at best in some of Ohio’s active drilling areas. That could limit responders’ ability to access online information from the scene of a fire or other emergency. For that reason, critics don’t want companies excused from providing information at the local level.

The oil and gas industry “should have to comply with the EPCRA laws just like every other industry that uses chemicals,” said Houston.

HB 490 would also let ODNR decide whether the database and its information should be made public.

That provision could hinder efforts by neighbors and others to find out what chemicals are used in oil and gas-related activities—even when the information is not covered by trade secret claims.

“Folks need to know and be able to get access to information about chemicals that are being used very close to their homes,” said Houston.

As currently written, HB 490 might also allow millions of gallons of water from the Lake Erie watershed to be used for hydraulic fracturing, or fracking.

Fracking uses millions of gallons of water to crack and prop open deep rock formations so oil and gas can flow out. Ohio’s current oil and gas boom combines fracking with horizontal drilling methods to get resources from the Marcellus and Utica shale formations.

At issue are terms in the bill that expand the types and volumes of water withdrawals for use within a “straddling community.” Such areas sit partly inside and partly outside the watershed’s boundaries.

Critics say those provisions may violate the Great Lakes Compact—an interstate agreement among Ohio and seven other states.

The compact significantly restricts export of any water from the areas that drain into the Great Lakes and the St. Lawrence River Basin. In general, withdrawals for communities that straddle the watershed’s edges are limited to use for a public water supply.

“Ohio simply cannot try and change the binding agreement it made with the other Great Lakes states through a back door amendment,” said Jack Shaner of the Ohio Environmental Council in testimony to the Ohio Senate Agriculture Committee.

It’s also unclear how withdrawals from the watershed might affect water quality in Lake Erie or other water bodies.

One worry is that withdrawals might lead to lower flow in some rivers that are important for commercial and recreational fisheries. For example, less water in the watershed could lower water levels in places like the Grand River, Shaner noted. That’s an important spot for steelhead trout fishing.

Critics also worry about the possible concentration of pollutants in Lake Erie if total water in the watershed is reduced. Lake pollution from agricultural runoff helped create conditions for the harmful algal bloom that shut down public water supplies for the city of Toledo this summer. (Other parts of HB 490 do attempt to limit nutrient runoff. However, the bill still provides exceptions that worry Shaner and others. )

HB 490 does strengthen some penalties for violations of Ohio’s oil and gas laws. However, it falls short of the stricter provisions that Gov. John Kasich had initially sought.

“The [Ohio Oil and Gas] Association continues to work with the Administration to ensure bad actors are held accountable while operators in good standing are not unintentionally affected,” Bennett said.

The current bill is “weakening the governor’s proposals for the most part,” Shaner said. Beyond that, it would “roll back and eliminate several criminal and civil penalty provisions in current law,” Shaner stressed. The bill also falls short of background check requirements that Shaner and others believe are necessary to protect the public.

UPDATE: On February 17, 2015, the Ohio Supreme Court ruled against the City of Munroe Falls in its appeal.