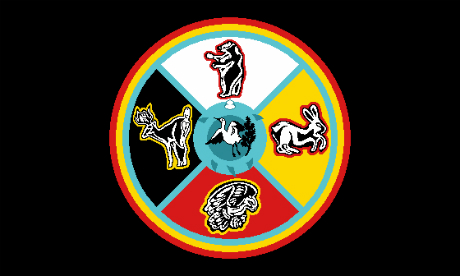 The flag of the Sault Ste Marie Tribe of Chippewa. (Image via Wikimedia Commons)

Though recognized just last week by the White House, the Sault Ste. Marie Tribe of Chippewa Indians has been active in climate change mitigation and adaptation since the “beginning of time.”

Whether it’s energy conservation or growing an independent, local food supply, “These are things that make us more robust for changes that come down at us. We’ve been doing it forever. Now there’s a realization that there are things we need to do to reduce the impacts of climate change and build our ability to cope with changes that are coming,” she said.

The Sault Tribe (pronounced “soo”) — whose service area includes thousands of members in a seven-county region in Michigan’s eastern Upper Peninsula — was one of 16 communities recognized as a “Climate Action Champion” by the White House. It was one of two tribal governments. They join the ranks of major American cities like San Francisco and Boston, as well as small cities like Oberlin, Ohio.

Other Midwest cities recognized were Minneapolis, Kansas City and Dubuque.

While the recognition does not come with direct financing for climate resiliency, the communities are equipped with federal technical assistance to help leverage their goals.

The Sault Tribe was specifically recognized for its “holistic approach to climate action and preparedness,” the White House said, that not only includes a long-term energy strategy, but also emergency preparedness, waste management and sustainable development.

The tribe is working towards a net-zero energy goal and reducing greenhouse gas emissions by 4 percent a year.

Brosemer said energy commitments began in the 1980s when new tribal housing included solar-heating systems. About 12 years ago, the tribe commissioned a study on the feasibility of generating wind power.

But while the Sault Tribe is yet to install its own renewable generation, energy efficiency projects — which Brosemer said started “in earnest” five or six years ago — have been the first phase of its long-term energy strategy. Over 500 structures (government buildings and homes) within the service area have had energy audits and efficient lighting systems have been installed.

“We’ve saved a lot of energy and money on that,” Brosemer said. “We’ve really tackled the housing stock and government buildings, but we still have lots to do with efficiency.”

Brosemer estimated the tribe has invested hundreds of thousands of dollars through a variety of funding mechanisms, such as rent surcharges, grants or in-house expertise.

These conservation measures are the first phase of the tribe’s energy strategy.

“Once that is accomplished, we will look at what can be built” for generation, she said, recognizing other tribes in the state pursuing renewable energy development. “We’re not in that kind of running yet.”

In addition to energy, Brosemer said the tribe aims to lower its greenhouse gas emissions by reducing the amount of methane generated from waste and by growing food locally.

The commitment to sustainability is intrinsic to Native American heritage. You might say that ancient practices now, at times, fall under the modern umbrella of climate change resilience.

“As the original inhabitants to our territories, it is our sacred responsibility to protect our natural resources,” Sault Tribe Chairman Aaron Payment said in a statement to Midwest Energy News. “I am proud of our team for development of our climate change recommitment.”

Brosemer closely follows the scientific literature on climate change, “So I perceive it as catastrophic,” but among the rest of tribal members: “I think most people understand it is there and it’s real but the end results are unknown, scary.”

While the Sault Tribe may be immune from sea-level rise or hurricanes, Brosemer said, climate change will impact tribal members who are subsistence farmers.

“And people in coastal cities are going to need to go somewhere,” she said. “We have water here — we are going to be a magnet for environmental refugees and no one wants that.”

Moreover, tribal governments are in a different position than non-tribal communities to deal with these changes because they can’t tax income of their members, Brosemer said.

“We very much are dependent on the federal government and its trust responsibilities to support the health and welfare of tribes,” Brosemer said. “We are in a completely different situation.”

That leads to a culture of resourcefulness, she added, and “being assertive in looking for every possible funding source. I’m hoping this particular recognition will be a bit of help with that.”