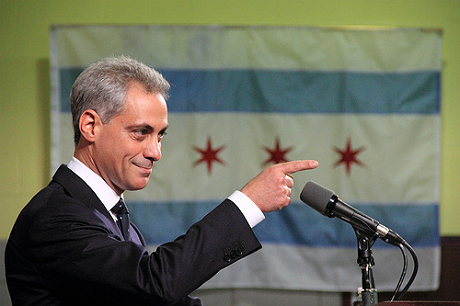 Chicago neighborhood activists say Mayor Rahm Emanuel is taking too much credit for the closure of the Fisk and Crawford coal plants. (Photo by Daniel X. O'Neill via Creative Commons)

Even though they closed in 2012, Chicago’s controversial Fisk and Crawford coal plants are making an encore appearance in this year’s municipal elections, to be held Feb. 24.

Chicago Mayor Rahm Emanuel’s first televised campaign ad featured the mayor on a park bench talking with Kim Wasserman, one of the community leaders who worked for more than a decade to try to force the coal plants to clean up or shut down.

The ad portrays Wasserman giving Emanuel credit for brokering a deal that shut down the Chicago plants, which immediately sparked outcry from many of the community activists who had been working on the issue since the early 2000s. They said they resented Emanuel taking credit for the plants’ closing. And they pointed out that the plants were likely to close anyway – and did close well before Emanuel’s deadline – because of competition from cheap natural gas. Additionally, the deal Emanuel brokered included the dropping of a lawsuit against the company Midwest Generation’s other Illinois coal plants.

Wasserman later told Chicago Reader reporter Steve Bogira that Emanuel had played a “minute” role in the struggle. Meanwhile it appeared clear that Emanuel chose to focus on the coal plants in his ad because his closest rival, Cook County Commissioner Jesus “Chuy” Garcia, lives and has a deep base in the Little Village and Pilsen neighborhoods where the plants are located.

Byron Sigcho, a candidate for the 25th Ward, attacked the Emanuel ad.

“The Mayor’s trying to claim it but we were there before him,” said Sigcho, a doctoral candidate at the University of Illinois at Chicago with a background in economics. Sigcho is running against incumbent Alderman Danny Solis, who for years declined to support calls for the coal plants to clean up or shut down, then switched his position after being forced into a run-off after the primary election in 2011.

“The coal plant’s gone but not because Rahm Emanuel closed it or because Danny Solis opposed it, because he didn’t,” until the very end, Sigcho said. “We could have had it closed a long time ago.”

NRG Energy has purchased the two closed coal plant sites and is reportedly close to an agreement with city officials on how to reuse the sites. Aldermen representing Pilsen and Little Village in City Council could have significant say in that process. Sigcho said community members involved in an ongoing task force around the issue are determined to make sure the plan includes access to the adjacent Chicago River and green space.

“That all could have happened much sooner” with different political leadership, Sigcho said.

Since the coal plants closed, the most prominent environment- and energy-related battle in Chicago has been over the storage of petroleum coke, or petcoke, on the city’s Southeast Side.

After community activists pushed the issue into the public consciousness, the city adopted rules to be administered by the Chicago Department of Public Health (CDPH) that limit expansion of the piles of petcoke and require that they be enclosed. Local residents called the rules too weak and full of loopholes, including the ability for companies to request variances (or exceptions) from the rules. The main company storing petcoke, the Koch Industries subsidiary KCBX, has requested such variances.

One of the most prominent leaders of the movement against petcoke storage, Olga Bautista, is running for City Council in the 10th ward, opposing incumbent John Pope. Pope initially introduced an ordinance that would have significantly curbed petcoke storage in Chicago, but he later backed a revised, much weaker ordinance, provoking ire among local residents.

“Things are heating up once again in Petcokelandia, aka South Chicago,” said Bautista. “We have engaged the Koch Brothers in a battle over their complete disregard for the lives of South Chicagoans.”

On Monday, Bautista led a group of residents in delivering letters to Emanuel’s office and the public health department demanding that the variances be denied and that the rules be strictly enforced. The letters were signed by Bautista personally as the leader of the Southeast Side Coalition to Ban Petcoke, along with the Natural Resources Defense Council, the group Reclaim Chicago (which has endorsed specific candidates for City Council) the labor union National Nurses United, and the Southeast Environmental Task Force.

“We expect that you will make it a priority for the CDPH to have the authority and resources to make proper inspections and enforce these new rules,” said the letter to Emanuel. “Most importantly, we hope you won’t bend to the vague threats and intimidation tactics by the corporate thugs who want to maintain the status quo.”