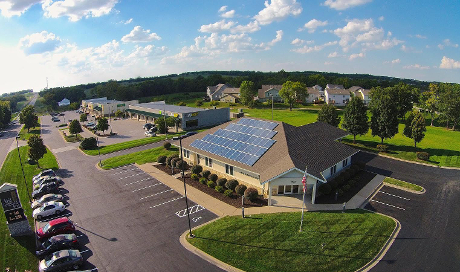 In Kansas, where state and utility policies offer almost no incentives for the development of residential solar energy, one solar installer and a small-town banker have cobbled together an unusual financing system that is leading to a statewide solar boom.

“We are pioneers in a state that hasn’t had a lot of solar,” said Aron Cromwell, who owns Cromwell Solar in Lawrence. “We are making solar available where it hasn’t been available before.”

Cromwell got together with Mid America Bank, and together they devised a leasing program that has remade Cromwell’s business model. Until recently, 95 percent of his work was for businesses in Missouri, located about 40 miles to the east. In recent months, Cromwell said, his business has flipped: about 95 percent of his installations are for homeowners in Kansas.

He attributes that to two factors: the phasing out of utility-paid solar rebates in Missouri, and Cromwell’s financing arrangement with Mid America Bank that has created an economical path to solar for Kansas homeowners.

“We install the system,” Cromwell explained. “The bank buys the system from us. They take the credits and depreciation savings, and the homeowner pays the bank a monthly fee to have panels on their roof. They get the energy savings.”

Also, according to Cromwell, customers generally pay less per month than they would have paid for electricity before installing solar panels. Their total cost amounts roughly to a very low interest rate, he said, compared to what they typically would pay for a loan.

“The bank is taking advantage of incentives that the homeowner cannot take advantage of,” Cromwell said. “You can always just get a loan. A lot of our customers get a home-equity loan. This is better. The bank is making a profit from an incentive the homeowner cannot receive. That’s the depreciation savings. That’s how the bank is making their money. That’s why it ended up being a win-win.”

Although the leasing of solar panels is not uncommon, Ken Johnson of the Solar Energy Industries Association said he is “not personally aware of other instances where banks are doing this.” What’s most unusual about the Kansas arrangement, he said, is that the bank is the entity collecting the tax and depreciation benefits.

Bankers historically have been reluctant to loan money for solar installations, he said. But they gradually have been warming up to the lending potential in photovoltaic panels.

“Ten years ago, it was almost impossible to get a bank to do it. But the times are changing,” Johnson said. “Solar systems are becoming much more economical and cost-competitive.”

Before it got into the solar-leasing business, family-owned Mid America Bank hired Cromwell Environmental to put a 12-kilowatt system on its main branch in Baldwin City in 2010.

A couple years later, Cromwell approached the bank and proposed a partnership to finance and promote solar energy “to make it more affordable, the upfront cost being one of the biggest hurdles,” said Jeff Hill, the bank’s vice president.

“It went through numerous versions, trial and error, meeting with regulators and accountants, to make sure it was solid,” Hill said.

The bank developed a 15-year lease, with no upfront fee and monthly payments that would start low, and gradually escalate to reflect anticipated increases in utility rates. But averaged over a year, Hill said, the monthly lease is less than customers’ electric bills. Customers also have the option of purchasing the system.

Although the state of Kansas and its utilities don’t offer the financial benefits available in many states, Hill said, “It’s profitable for us. We wouldn’t do it if it wasn’t.”

But there’s a philosophical element to the bank’s choice as well.

“We believe renewable technologies are important, and we want to promote them as much as possible,” Hill said. In the past few months, the bank had solar panels put on the roofs of its other two locations, in part to send the message that it’s in the solar business, Hill said.

Eighteen months since the bank first offered the solar leases, about 70 people have signed them, in some cases creating additional business for the bank.

“They’ve found they have pretty good success in converting solar-lease customers into other types of bank products,” Cromwell said. “Somebody who wants to refinance a house or buy a car, when it’s time to do that, a lot of solar-lease customers are saying, ‘I like these guys. They share my values.’ ”

The lease program has expanded its reach since the first transactions about 18 months ago. At that time, Cromwell and the bank offered the arrangement only in and around the communities where the installer and the bank are located.

“We’re doing a pretty good business across Kansas now,” Cromwell said. “We have a strong mission to really increase solar across the state of Kansas.”

The state’s net metering law was challenged during Kansas’ 2014 legislative session, and was salvaged in a compromise between solar supporters and utilities opposed to it. Although he doesn’t think the legislature is likely to try to prohibit or limit solar leasing, Cromwell believes that utilities may use a couple of upcoming rate cases to try to impose a surcharge on solar customers.