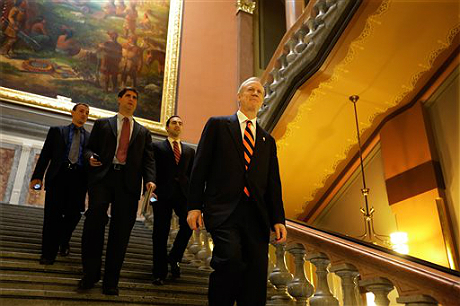 That was the message of the Midwest Energy Efficiency Alliance in a teleconference on Wednesday analyzing the effect of the November elections for governor and state legislature in 13 states where Republicans were generally victorious.

But there is also uncertainty ahead in the energy efficiency landscape, namely in three states – all with Republican governors and legislative majorities – where rollbacks of energy efficiency mandates have occurred.

Gov. John Kasich was re-elected in Ohio, and Gov. Mike Pence is still in office in Indiana, up for re-election in 2016. In those states, majority Republican legislatures this year passed bills freezing and ending, respectively, the states’ mandates for increased energy efficiency.

Scott Walker was re-elected Wisconsin governor in November, and rate cases approved by the two Republicans he appointed to the Public Service Commission could mean disastrous effects not only for solar energy but also for energy efficiency. Among other things, those rate cases – involving three different utilities – involve significantly increased fixed charges regardless of energy use, and reduced cost per unit of energy used. That means less incentive for consumers to reduce their energy use.

“We’ll see how that plays out,” said Cassandra Kubes, policy associate with MEEA, which is a network of research institutions, investor-owned utilities, advocacy groups, manufacturers and retailers and other partners. “That’s all in our recipe for a lot of changes potentially going to happen to energy efficiency in the state.”

Wisconsin had also rolled back its energy efficiency mandate in 2011, and Walker has cut $328 million from the state’s Focus on Energy program.

There are 21 states nationwide with mandates that utilities reduce energy demand in their service territory. Other states have voluntary programs, or they count efficiency toward meeting renewable portfolio standards.

Of the Midwest states MEEA examined, North Dakota, South Dakota, Nebraska and Kansas do not have efficiency mandates. Indiana just ended its program and Ohio froze its mandate for two years, leaving its future in doubt. Missouri has voluntary energy savings programs for consumers.

Efficiency mandates are typically passed by state legislatures, and approved or vetoed by governors. Public service commissions, in most cases appointed by governors, oversee utilities and the specifics of energy efficiency programs.

Of MEEA’s focus states, Republicans have a majority in both the House and the Senate in eight of them. In Illinois, Democrats dominate both chambers. In Minnesota and Iowa each party dominates one chamber, and Nebraska has a unicameral nonpartisan legislature.

Democrats currently dominate the public service commissions in Missouri and Minnesota. Republicans dominate in Wisconsin, Iowa, Indiana, Ohio, South Dakota and North Dakota. In Michigan, the commission includes a Republican and two Independents. Kansas has two Republicans and one Independent. Nebraska doesn’t have a regulatory commission. Some states require that the commission be bipartisan.

In Wisconsin, Public Service Commissioner Eric Callisto, appointed by previous Gov. Jim Doyle, a Democrat, will see his term end in March 2015. Then Walker will appoint a replacement, and in Wisconsin there is no requirement that the commission by bipartisan. Renewable energy advocates see the Wisconsin situation as highly problematic.

But during the teleconference, Kubes said that in general the political makeup of public service commissions does not determine their stance on energy efficiency.

Trouble in Ohio and Indiana

But Kasich signed SB 310 on June 13 of this year. The law froze the state’s energy efficiency resource standard at 2014 levels for two years, and convened a committee of legislators – most of whom voted for the bill – to study the economic impact of energy efficiency.

The bill faced significant opposition from clean energy advocates and also from big companies that stood to profit from energy savings. Private investment in energy efficiency has seriously stalled since SB 310 passed, Kubes said. She also noted that the Public Utilities Commission of Ohio approved FirstEnergy’s request to cut its energy savings program by 85 percent.

Pence declined to sign or veto the bill, which meant it became law by default. That means the state’s Energizing Indiana efficiency program will end this month. That program was created under Republican former Gov. Mitch Daniels. An analysis by MEEA showed the program had led to energy savings in 2013 that were 73 times greater than in 2008, before the program, and that every dollar invested yielded two dollars in benefits.

A bright spot in Michigan

While Snyder kept his seat, 44 new faces were added to the Michigan House, increasing the Republican majority in an election where Democrats had hoped to take control. “There’s a lot of energy-efficiency education that’s going to be needed in the coming year” targeting new legislators, Collingsworth said.

A bill introduced but not expected to pass in the brief remainder of Michigan’s legislative session would create on-bill financing for energy efficiency improvements, making it much easier for customers to finance improvements. Collingsworth said the bill will likely be re-introduced in the next legislature.

Michigan’s previous energy efficiency mandate had called for one percent electricity savings and 0.75 percent natural gas savings by 2012. Collingsworth said the legislature is expected to update the law next year.

A push in Michigan to make the state fully deregulated, as it had been from 2001 to 2008, could also affect energy efficiency investments. Currently only up to 10 percent of customers are allowed to choose to get their electricity from a retailer other than the major utility. A deregulated market could create competition between electric suppliers to offer attractive energy efficiency incentives.

A Mixed bag in Other states

In Minnesota, Democratic Gov. Mark Dayton was re-elected, while the state House flipped from Democratic to Republican majority. The public service commission includes three Democrats and two Republicans. Minnesota is supportive of energy efficiency in general, with a program incentivizing upgrades in public and commercial buildings, a study ongoing about the potential of combined heat and power in the state, and a statewide clean energy jobs program.

Illinois’ energy efficiency standard called for two percent reductions in electricity use by 2015, but the target may not be met, in large part because of a rate cap that prevents utilities from charging above a certain amount for energy efficiency upgrades.

“A lot of people have been brainstorming – if we’re not going to get there, what are the problems and what do we need to do to get to that point,” said Kubes. “There’s a lot of conversation around that, and potential to see some sort of legislation around energy efficiency in the coming year.”

In Illinois as in other states, Kubes said there is also “potential for some sort of industrial opt-out to resurface,” a possible blow for efficiency.

A number of the states that MEEA evaluated – Indiana, South Dakota, Nebraska, Ohio and Kansas – are suing the U.S. Environmental Protection Agency over its plan to reduce carbon emissions from coal plants. Some of those states’ legislatures have nonetheless passed laws allowing the state to implement its own emissions reduction plan to meet federal targets, as called for by the EPA.

Energy efficiency mandates could be part of a state’s implementation of the Clean Power Plan, and reductions in demand could help states meet requirements of the plan. How that would play out exactly remains to be seen, the MEEA speakers noted.

The EPA’s plan calls for all states to reduce their energy use by about 1.5 percent each year compared to 2012 levels. These incremental improvements would add up to a significant savings by 2030, the goal date for the EPA emissions reduction plan.

The EPA set out efficiency goals for states by year, with states that are not currently making improvements ramping up gradually. A map compiled by the Center for Climate and Energy Solutions shows that Midwestern states are faring relatively well in stacking up to the EPA targets.

The MEEA is a member of RE-AMP, which also publishes Midwest Energy News.