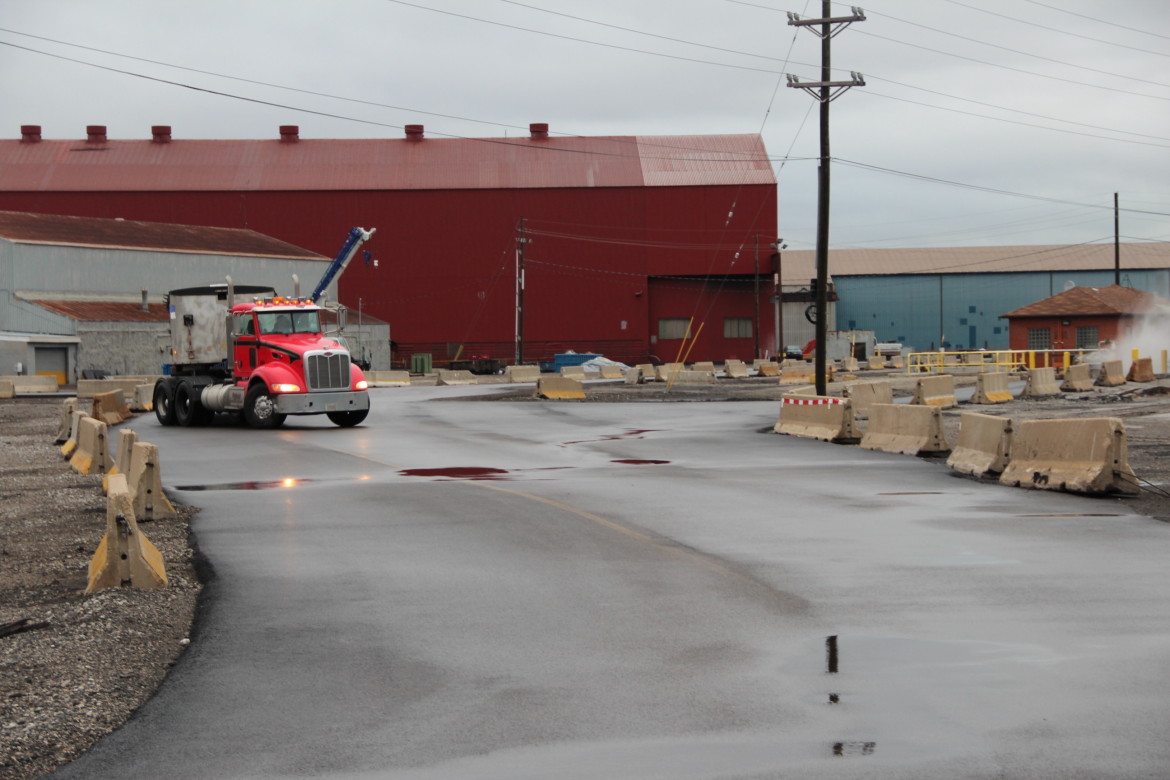 The piles of petroleum coke, or petcoke, on Chicago’s Southeast Side that have created a furor over the past year and a half would become invisible under a plan that the Koch Industries subsidiary KCBX Terminals unveiled on Tuesday.

The piles would be enclosed in a roughly 10-story-high, 1,000-foot-long building. The rest of the company’s 82-acre footprint alongside the Calumet River would be planted with grass and trees, as shown in the company’s newly released renderings and 30-second animated video.

KCBX says the plan shows their commitment to remaining in Chicago, investing in a “state-of-the-art facility” and working to mollify local residents upset about pollution. Local opponents say the release of the enclosure plan is just a public relations move, given that the company doesn’t plan to complete it until more than a year after a city deadline.

KCBX is required to fully enclose the petcoke piles under city health department rules adopted earlier this year. The rules require the enclosure to happen by June 2016. But the company has requested an extension, and KCBX spokesman Jake Reint said they are this week filing a formal request for an additional “13 or 14 months” to enclose the piles.

The company’s enclosure plan calls for starting construction in fall 2015, and says the construction will take two years. The company has signed a deal with the Chicago & Cook County Building & Construction Trades Council, promising that the about 150 construction jobs created will go to union members.

KCBX asked for 45-foot-high piles, noting that their piles used to be 60 feet high. And the company asked that they not have to cover conveyors on a site to the north of their main site, since they plan to consolidate and close that site. The city denied both of those requests. It ruled in KCBX’s favor on three other variance requests regarding dust suppression and run-off management.

City Council also last week introduced an ordinance, supported by Mayor Rahm Emanuel, that would order the city planning department to create limits on how much petcoke can be stored.

Olga Bautista, a leader of the local residents group which has been calling for a moratorium or ban on petcoke storage, said that during a conference call last week, city officials “seemed proud” of their efforts. But she said local opponents are not impressed, and she fears local health will suffer if KCBX is allowed an extra year or more to enclose the piles.

“What’s more embarrassing [to the city] than being bullied by KCBX is being played by KCBX,” she said.

Reint said that permitting and regulatory processes will delay construction until the fall of 2015, and he said the introduction of the ordinance could delay things even more. “The ordinance would impact our final design,” he said. “We can’t start building until we know what to build.”

Even if the variance request is denied and the company is required to enclose piles by summer 2016, Reint said it won’t happen. “It wouldn’t be possible to get it done sooner” than late summer or fall of 2017, he said. “Physically we can’t do it.”

Reint declined to say what the company would do specifically if the variance request is denied.

He said the company has not decided whether they will invest in enclosing conveyors on the north site, as is required since the city denied the request to leave those conveyors uncovered. He said the petcoke there cannot be moved to the main site until the enclosure is done.

“We will comply with the rules,” he said.

KCBX has previously said that strict limits on their operations might make it impossible for them to operate. Reint said that currently, “We certainly believe we’ll continue to do business in Chicago. We’ve been focused on addressing the concerns of our neighbors.”

It appears the enclosure will diminish the amount of petcoke that can be stored on site. The 82-acre site could theoretically contain more than 100 million cubic feet of petcoke in piles 30 feet high, if it were stored all in one big pile.

The enclosure, at about 1,000 feet long, 100 feet high and 200 feet wide, could theoretically hold about 20 million cubic feet of volume. Reint said that it must be configured to keep petcoke separated from coal, KCBX’s other bulk commodity. Currently coal makes up about 40 percent and petcoke 60 percent of the company’s material, he said.

He said that KCBX will still be able to meet its customers’ demands with “more efficient” operations run out of the enclosure. The city rules apparently would allow the company to build more enclosures on the property; Reint said they have no plans to do so.

Bautista said that residents will still be exposed to petcoke even once the piles are enclosed. Petcoke is transported on barges and rail cars that are not required to be covered. Residents are also worried about truck traffic to and from the site. This fall Bautista photographed a truck she said was carrying petcoke that had tipped over in the neighborhood.

“Truck traffic is not only a nuisance but a danger to our community,” she said. “Even with the enclosure, how is that going to be avoided?”

In response to the city rules, KCBX has paved roads inside and serving the site, and installed a wheel wash that trucks must pass over before exiting – all measures to avoid run-off and dust.

Under heavy rain clouds on December 16, a train snaked slowly through the facility and trucks traversed the smooth new asphalt roads, throwing spray into the air as they passed through the wheel wash. Bautista was about half a mile away in her campaign office; petcoke and other local issues have spurred her to run for City Council in February 24 elections. Inside a rickety glass cabinet in her office sat a tall White Castle paper cup filled with petcoke. Standing on the front stoop, Bautista wiped her hand across the grimy doorframe and displayed a palm coated with fine black dust, which she says is petcoke.

Her campaign manager is Anthony Prince, who grew up on the Southeast Side and worked in the nearby steel mill before going to law school in California. Now he’s a labor lawyer representing unions.

He scoffed at the promise that the enclosure will create good jobs in the community. He said scores of retired steelworkers are now suffering respiratory problems likely related to breathing in coal dust and the metallurgical coke used to make steel.

After the 150-job construction is done, Reint said there will be about 40 permanent jobs at KCBX.

Chicago officials have said that banning petcoke in the city would invite a costly legal challenge from KCBX; they have instead pushed for rules that could make it unattractive for KCBX to operate in Chicago. In February, Mayor Rahm Emanuel told WBEZ public radio, ““We’re going to make sure the ordinance [creating the rules] puts up a ‘not wanted’ sign in the City of Chicago as it relates to pet coke.”

A December 10 city press release quoted Emanuel saying, “Petcoke operators must play by the rules we established to protect our residents from the harmful effects of petcoke dust.”

But Bautista and Prince think the impending showdown over the timeline for the enclosure will make it clear that city officials do not really intend to rid Chicago of petcoke.

“These renderings don’t even have any architectural detail,” said Prince of the colorful but simple drawings released by the company. “The whole thing was kind of a setup, the city waved its fist at KCBX, and then KCBX said, ‘We’ll do something,’” by announcing the enclosure plans and timeline well beyond the city deadline.

“Now the city is caught in the bind of, ‘Did you really mean you didn’t want them?’”