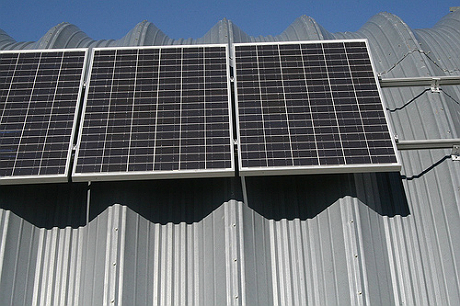 Solar panels on a Colorado barn. (Photo by Les Stockton via Creative Commons)

On a farm in the middle of Iowa are two hog- confinement barns, identical in most every respect, and both belonging to the same farmer.

But when the owner decided to install solar panels, he put a 75 kilowatt system on one barn, and only 20 kilowatts on the other.

The reason for the difference in sizes? Solar installer Ben Ganje explains that the barn with the 75 kW system gets its power from Alliant Energy, a state-regulated utility that allows distributed generators on its system to carry over excess production indefinitely to use as a credit against future bills.

The barn with the 20 kW system, located nearby, is served by the Butler County Rural Electric Co-op, which is not subject to any state requirements or regulations when it comes to the treatment of customers with solar panels. So Butler County’s policy is this: customers may use solar panels to offset their electricity use, provided the production and consumption occur at the same time.

That doesn’t amount to very much electricity.

And for a Butler County customer, it can mean that investing in very much solar capacity doesn’t make very much sense.

“Our customers would put up a lot more solar if those rules were changed,” Ganje said about Butler’s policy. He is the marketing director for Able Energy Co, a Wisconsin installer that does work in several states, including Iowa.

Among the rural co-ops in Iowa with a net-metering provision, Ganje said, “In my experience, about a third of the coops we deal with are solar-friendly, a third are neutral, and a third seem to have policies that are harmful to setting up solar for residential customers.”

Butler County did at one time offer a less restrictive net metering arrangement, but closed it after accepting three customers.

The Calhoun County Electric Cooperative Association, like Butler County, has devised a way to use smart meters to closely scrutinize power production and consumption among distributed generators.

Keaton Hildreth, the coop’s member services representative, said the utility offers a net-metering option in which it tracks power coming in and going out at 30-minute intervals. Billing is based on those snapshots. Essentially, a customer generating power cannot carry over credit for it for future billing. Instead, when generation exceeds consumption, the utility buys the excess production at 5 cents per kilowatt hour, a little bit more than the avoided cost (by comparison, big utilities like Alliant pay a much higher retail rate). Two customers currently are on that plan.

Calhoun County also offers what it calls “net billing” in which a customer can carry forward excess generation to use later. There’s an annual “true-up” on Jan 1. Hildreth said three customers currently are utilizing that option.

Hildreth says the billing arrangements are made in order to charge self-generation customers for transmission services that they require, and to protect other customers from subsidizing the services provided to those with solar panels.

The Iowa Utilities Board, which regulates utilities, began in January to review its policies with regard to solar power and other forms of distributed generation. It does not intend to begin imposing requirements on the 44 power co-ops and 136 municipal utilities that, combined, sell about one fourth of the power used in the state.

According to a recent e-mail from the state’s utility regulator, “the Board’s jurisdiction in this area is subject to legal debate and the Board has determined it will not, at this point, test whether it could assert jurisdiction.”

In fact, 23 of the state’s 44 cooperatives have established net metering programs of some sort, according to a document filed a few months ago with the utilities board. And some of them encourage customer generation.

The Allamakee-Clayton Electric Cooperative launched net metering in 2003 “at the request of members,” said John Molumby, the head of member services. “Our board of directors and management wanted to help.” The co-op doesn’t limit the number of distributed generators on its system, Molumby said, as long as the distribution system can handle the load. It does limit any single distributed generator to 40 kW.

Presently, 31 of Allamakee-Clayton’s customers are net metering their operations. Any excess production, as calculated at the end of the calendar year, is compensated at an avoided-cost rate. Within the context of 10,000 meters, Molumby said, “It’s such a small percentage, we are not concerned about how many would be on it at this time.”

‘How do you pay the lineman?’

Some other Iowa power co-ops are less welcoming of distributed generators on their systems, however. The East Central Iowa Rural Electric Cooperative offered customers net metering with a once-yearly calculation of power generation versus consumption. After 17 people accepted the offer, the co-op said it had reached its 250 kW cap and closed the offer to its remaining 6,500 customers.

“At some point the board felt that, with the (kilowatt-) banking approach, it may have been giving away too much,” said Frank Weber, member services director for the cooperative. “Those people were buying and selling electricity at the same price. If you’re buying and selling at the same rate, how do you pay the lineman?” East Central still allows customers to sign up for net metering with once a month true-up. It’s far less lucrative for customers, and their interest in that option is far less.

With three customers on a net metering plan, and a fourth pending, the Franklin Rural Electric Cooperative is approaching its limit. General manager Fran Buckel said the co-op established a 100 kW limit on the total amount of capacity it would accept for net metering. The co-op’s net metering program might be able to accommodate one more customer, Buckel said, adding that the utility has “not experienced an overamount of interest.”

Franklin, which provides power to about 2,200 meters, allows a once-yearly true-up, and pays the avoided-cost rate for any excess production. According to Buckel, the program has had lukewarm success. Of the three current net-metering customers, “One is quite successful, one is struggling, and one is oversized.”

He said that Franklin intends to join with other co-ops in the state to evaluate the performance of their net metering programs, and to assess “the impact on rates and costs.” Franklin, like other co-ops, is concerned about loss of revenue and the possibility of fixed costs being shifted to customers without net metering.

Nathaniel Baer, the energy program director for the Iowa Environmental Council, thinks the impact on rates won’t likely be noticeable. “We spent a little time looking at the actual policies offered and concluded that many of them offer net energy metering, but they place such significant restrictions on it that it’s not a comparable policy to what the (investor-owned utilities) offer,” he said.

And since co-ops and municipals currently are not required to provide net metering, why would they offer it, even on a very modest scale?

“I think they think it looks good,” Baer said. “They are always worried about whether the legislature or the utilities board would try to impose a requirement that they do something, so they want to look like they’re doing it voluntarily.” In many cases, he said, “It’s an image.”

The Iowa Environmental Council is a member of RE-AMP, which publishes Midwest Energy News.