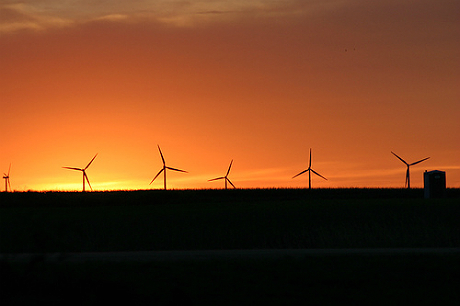 A wind farm near Worthington, Minnesota. (Photo by Seward Inc. via Creative Commons)

A new report suggests Minnesota could supply more than 50 percent of its power needs through renewable energy by 2030 while creating more jobs and meeting federal carbon targets.

The Wind Energy Foundation’s “Powering Up Minnesota: A Report on The Benefits of Renewable Electricity Development” offers a scenario in which Minnesota could produce 6,884 megawatts (MW) of renewable electricity under a more aggressive high growth scenario.

The report noted Minnesota has long been a player in sustainability, with $11 billion having been invested from 2004 to 2013, according to a Department of Employment and Economic Development study.

The power would come through solar, wind, hydropower, biomass, geothermal and waste-to-energy plants. However, the report, paid for by the wind industry, suggests the majority of that number, 6,648 MW, will come from wind while vastly underestimating solar’s potential contribution.

Dustin Denison, president of Minnesota Solar Electricity Industry Association and CEO of Minnesota Community Solar, said the state’s renewable energy legislation, including a 2013 bill that requires investor owned utilities to produce 1.5 percent of their retail electricity sales from solar by 2020, have played a huge role.

Wind project costs have dropped 50 percent in the last five years, while solar prices decreased 40 percent since 2010, the report said. Those numbers are conservative, said Ryan Hodum, vice president of David Garner and Associates, which produced the report.

“We underestimated the real cost reduction we’re seeing in wind and solar,” he said.

The high growth scenario could create $2 billion in wages during construction and 1,200 permanent jobs, the report stated. But even if Minnesota takes a more modest path using the state’s existing renewable energy standard the result will be an additional 852 MW of renewables, $215 million in construction costs and 130 annual jobs.

Following either path will result in Minnesota complying with the Environmental Protection Agency’s Clean Power Plan, the report said. Renewable energy alone could meet the emissions requirement, the report stated, even without taking into account EPA’s suggested route of reducing electricity demand through energy efficiency and improving coal plant emissions.

Despite the excitement over solar in Minnesota, including the announcement of several large projects and the start of a new community solar program, Hodum said wind will still have an important place in the mix.

The report’s revenue projections for both scenarios rely on tax and land lease taxes paid by wind and hydropower producers — and not by solar or biomass, which do not produce taxes in the same way.

However, the report adds in the high growth scenario just 81 MW of solar by 2030. Xcel Energy will buying solar energy from several projects with an output far in excess of that modest number.  As Denison pointed out, the state’s solar requirement will add a minimum of 450 MW by 2020 in just the investor-owned utility space alone.

Hodum explained that the modeling used the Renewable Electricity Futures study by the National Renewable Energy Laboratory, done in 2012, prior to the Minnesota’s solar legislation. The data only included completed solar projects.