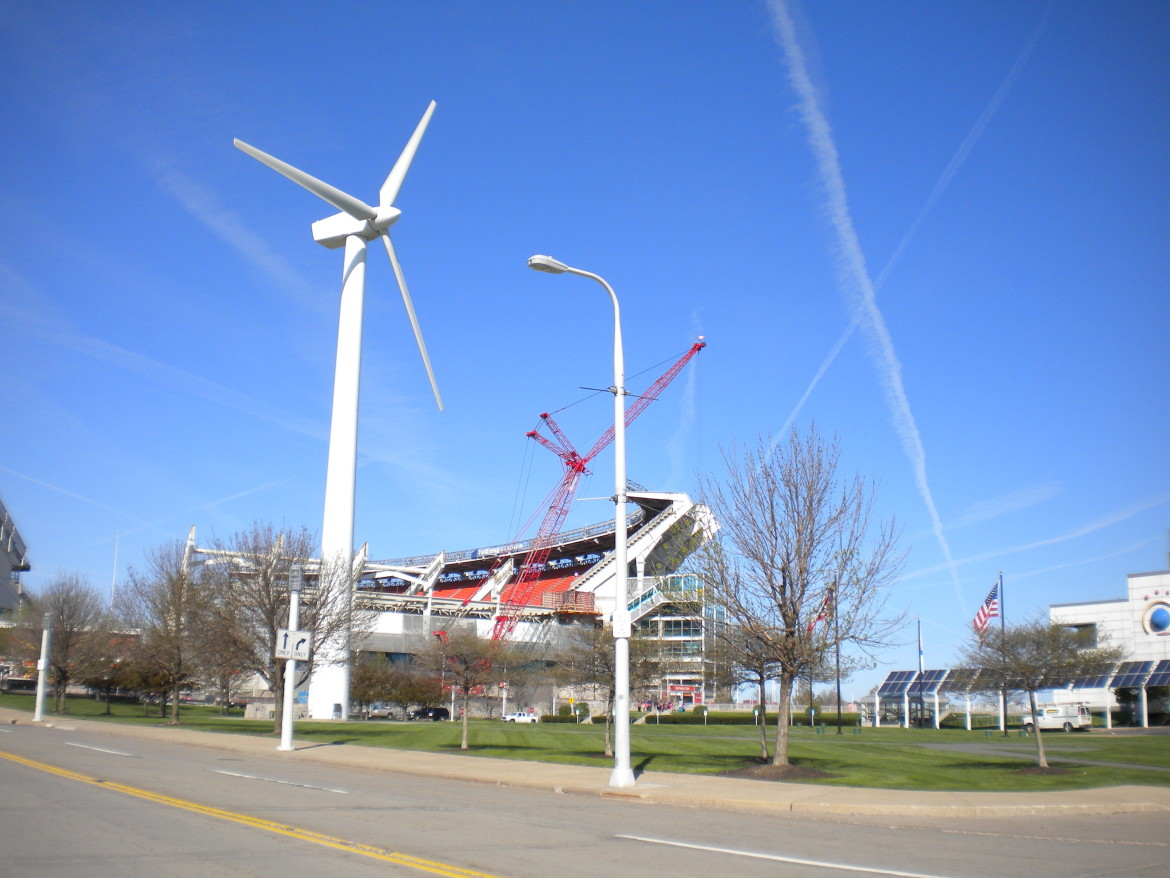 A wind turbine and solar panels show advanced energy in action at the Great Lakes Science Center in Cleveland, where Ohio's Energy Future Tour kicked off. FirstEnergy Stadium is in the background. Photo by Kathiann M. Kowalski.

According to a variety of industry and community leaders, Ohio still has a bright future ahead of it for renewable energy and energy efficiency.

That is the message of Ohio’s Energy Future Tour, which kicked off its first public forum earlier this week with a bright outlook for 2015 and beyond.

Companies have already invested millions of dollars and provided thousands of new jobs for the state, and Ohio has the potential to be a leader in multiple technologies, reported speakers at the December 15 program at the Great Lakes Science Center in Cleveland.

Nonetheless, political setbacks in 2014 have placed Ohio at a competitive disadvantage vis-a-vis other states, speakers said, and uncertainty about energy policies could further limit the state’s prospects.

In contrast to the polarized politics that dominated the Ohio legislature in 2014, organizers of Ohio’s Energy Future Tour stress that it is a bipartisan effort.

“Ohio’s Energy Future Tour is being planned and implemented by a broad, bipartisan coalition of businesses, local governments, nonprofits and trade associations—a coalition that reflects the scope of interest in these issues across the state,” said spokesperson Jane Harf.

Among the 16 speakers at the Cleveland program were moderator Tom Chema of The Gateway Group, Ronn Richard of the Cleveland Foundation, Andrew Watterson of Key Bank, and Jenita McGowan of the City of Cleveland. Other panelists included leaders from business, academia, healthcare and the community.

Presentations spotlighted a variety of technologies.

“We think Ohio could be a leader in renewable energy,” stressed Dennis Bollinger, who coordinates North American projects for Energy Developments, Inc. The company has invested $105 million in plants that convert landfill gas to energy in Lorain, Mahoning and Ottawa counties.

“The projects provide the utilities with a very consistent baseload supply source,” said Bollinger. Landfills produce gas around the clock all year, so that gas can produce electricity 24/7 too, he explained. “We take an otherwise wasted resource, and we put it to a beneficial use.”

Solar energy “is very viable. It works in Ohio,” said Alan Frasz of Dovetail Solar and Wind in Athens, Ohio.

Data from the National Renewable Energy Laboratory show that Ohio could theoretically produce “up to 99 percent” of its electricity from wind energy, noted Vinson.

While practical problems would preclude that big a share, Vinson said wind’s potential in the state’s energy portfolio is much higher its current share of less than 1 percent.

Other technologies discussed at the program included energy production from sewage sludge, combined heat and power, waste energy recovery, and a variety of energy efficiency programs.

Advanced energy companies aren’t the only ones who stand to profit, speakers stressed.

Van Wert, Ohio is a prime example of how communities can also benefit through jobs, lease payments and increased revenues, said Keith Dimoff of the Ohio Environmental Council before a screening of “Harnessing the Wind.” The video profiles wind energy’s impacts in Van Wert.

Companies outside the energy business can likewise benefit, said other speakers.

For example, combined heat and power projects can cut overall energy costs for industrial plants. Those improvements can make plants more competitive, said Laura Nicholson of Echogen Power Systems in Akron. As a result, companies can “bring back manufacturing jobs,” she said.

“We know we can bring benefits to the community,” Nicholson added.

In particular, Bole noted that rates for asthma and other diseases are higher in areas with power plants that produce energy primarily from coal, as Ohio does now.

“Nearly 1 in 5 children have asthma here in this region,” she noted. That figure is roughly twice the national rate of about 9 percent for pediatric asthma.

For this and other reasons, Bole said, University Hospitals and other area hospitals now see clean, sustainable energy as “part of our public health mission.”

On the legislative front, House Bill 483 tripled the property line setbacks for new commercial-scale wind turbines. The law makes it much harder to site any new large-scale commercial wind projects in the state.

Beyond that, Senate Bill 310 is affecting almost all sectors of the renewable energy and energy efficiency industries.

SB 310 halted increases in the state’s renewable energy and energy efficiency targets for two years, while also expanding the scope of what counts for both programs.

“It’s called a freeze, but that’s political-speak for a rollback,” said Keith Dimoff of the Ohio Environmental Council.

SB 310 also set up Ohio’s Energy Mandates Study Committee. Legislators on that committee are currently considering whether to make even more cutbacks to Ohio’s renewable energy and energy efficiency standards.

One reason is that scaling back the standards has made investments in Ohio less attractive compared to other states that offer more incentives for renewable energy or energy efficiency.

Beyond that, SB 310’s cutbacks in the standards and uncertainty about their future adds risk to economic investments, noted Bollinger.

“If I have a project that looks attractive but has political risk in it, then I have a much higher return rate curve I have to achieve than someone who is in a very stable political climate,” Bollinger said.

‘The economics can work’

“But the economics can work for a lot of these projects,” stressed Andrew Watterson of KeyBank in Cleveland. “It works now. It just depends on your time frame.”

“The costs of installation and the costs of the products have come down so dramatically,” Watterson added.

Forecasts for fossil fuel rates “just keep going up and up and up,” noted Frasz, even with the current boom in natural gas production. Those increases could make solar and wind energy “much more attractive” due to “zero fuel costs over 30 years.”

Moreover, costs for solar energy have come down significantly in recent years. “That’s making solar much more viable in spite of any roadblocks the statehouse has thrown in front of us,” Frasz said.

“Our culture took a segue with SB 310 that ultimately is an effort to throw sand in the gears of time,” added Mike Shaut of Carbon Vision, a Cleveland-area company works on solar and other renewable energy projects. “The fact is there is a forward momentum” toward clean energy and away from coal and other fossil fuels.

Much of that movement is fueled by public awareness of the environmental costs of fossil fuel generation, Shaut added.

Over the years, the fossil fuel industry and utilities have “basically externalized all their impacts,” agreed Bollinger, noting his support for U.S. EPA’s Clean Power Plan and other stricter limits on coal plants.

“If you burn something or put something into the atmosphere or into the air or water, then you ought to be responsible for cleaning it, or putting it back the way it was,” Bollinger added.

This fall, however, both the Ohio Environmental Protection Agency and the Public Utilities Commission of Ohio took utility-friendly positions on U.S. EPA’s Clean Power Plan. Both agencies opposed those proposed federal rules to limit carbon dioxide emissions from power plants.

“We have a choice,” said Lorry Wagner at the December forum in Cleveland. He heads the Lake Erie Energy Development Corporation (LEEDCo), which is developing wind energy for Lake Erie.

Supporters for the growth scenario hope Ohio’s state policy makers will listen. Organizers of the December program invited all northeast Ohio legislators, plus members of the PUCO and Gov. Kasich’s regional office. Only Rep. Mike Foley, a Democrat from Cleveland, was in attendance.