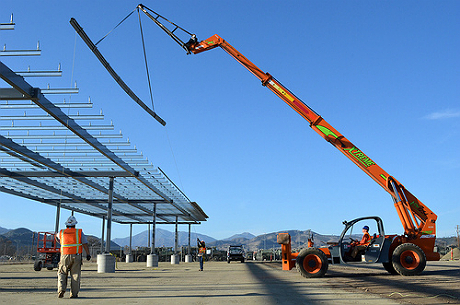 In November 2013, President Obama issued an executive order that has steered the United States military onto a course for climate change resiliency.

The Army National Guard’s base at Fort Custer, about 15 miles east of Kalamazoo, Michigan, is one of the leading installations in the country preparing for the effects of climate change and could serve as a model for others. In October, it was one of three sites selected by the Department of Defense to launch a climate resilience pilot project.

Officials there are preparing a climate adaptation plan that centers around natural resource management. A component of that will be renewable energy development: $1.4 million worth of wind and solar rated at roughly 500 kW of capacity.

The military’s national security approach to energy independence also has a practical side: lower electricity bills frees up money in a defense budget for other resources.

In an article published last month on the Army’s website titled “Why energy innovation is critical to military budgets,” consultant and professor Christopher Wedding argues that renewable energy and efficiency are “force multipliers” because of potential savings during times of budget cuts and troop reductions.

He also notes that “operational energy use accounted for 80 percent of all energy used by the DOD in 2012.” The department’s annual energy bill totals in the billions of dollars.

“In this new paradigm” of better energy security, Wedding writes, “every Soldier is challenged to be a better energy manager for reasons that have very little to do with environmental policy. The DOD should … create an energy-informed culture throughout its military ranks.”

Michele Richards, the Michigan National Guard’s natural resources specialist based at Fort Custer, recently discussed with Midwest Energy News the military’s approach to climate adaptation and how high-level officials are taking note of the work being done in Michigan.

Midwest Energy News: What is the job of a natural resource specialist in the U.S. military?

How does energy factor into your work?

We found out there is money available for alternative energy and we put together a proposal (to develop) solar cells and a wind experiment. We got $750,000 that will go toward an installation in the spring. Then we hired an energy manager in Lansing who applied for grant money. Now we have $1.4 million that we are putting toward solar panel installations as well as a wind tunnel operation, which is fairly unique. It is a proven technology and has a lot less of a natural resource impact.

We do get into energy and climate change mitigation and, eventually, we’d like to be able to be energy sustaining. Camp Grayling (in the northern Lower Peninsula) is almost net zero. They count producing fossil fuels on post as net zero, so they are not doing energy from a standpoint of what environmentalists would consider net zero, but for wastewater, energy and waste they will be net zero within the next two years.

From a broader perspective, what is the U.S. military doing in terms of climate change resiliency and, more specifically, renewable energy?

President Obama issued an executive order stating that we have to start talking about climate change within the military. It’s very exciting because I can say things I couldn’t say before.

Also, our leadership has been in touch with folks at the Department of Defense about a pilot project and wanted to choose an installation from each directorate: Army, Navy, Air Force. The Michigan National Guard was selected to do the Army pilot. It’s a crazy honor and there was a lot of competition.

The thing that clinched it for us was that the Michigan Climate Coalition has been involved and participating as an organization with partners that the military wanted to partner with. There are different aspects of our Army policy or guidance that we will incorporate climate change into our plans and all federal agencies had to do it.

What are the plans for Fort Custer, where you are based?

The first $750,000 is programmed at the Department of Defense level for a renewable energy installation so we’re prepared to install it and use it. The money past the initial $750,000 was grant money. We were selected because we were ready, willing and able to do it and now have $1.4 million for renewable energy on base, which will include a solar cell installation on the ground.

What is the goal of these adaptation plans?

The project just at Fort Custer is being done with the intention to be able to apply it across the country at other installations. The intent is to provide a few examples of what could be done, probably more at a regional scale. We want to do something that is hopefully implementable, to have actionable projects at the end of the planning process. My hope is that it will have broader implications than just the regions that the installations lie within. It doesn’t have to, so it’s kind of an experiment.

What is the energy component of these climate adaptation plans?

The (Department of Defense) is very clear that the next wars will be fought over land, water and food because of the impacts of climate change. We’re trying hard to prepare the national security component with what we’re facing, to be prepared in resource-limited environments and do things they still need to do.

New technologies and renewables can help power some of the war effort, but also on the home front we need to do that too. Energy bills are eating up a lot of the defense budget. They know they have to do something that makes a difference.

Why are these plans important at a place like Fort Custer?

Day-to-day training occurs at Fort Custer — 260,000 man-hours a year. Saving money and saving energy is saving the environment here: That’s the motivation. The reason we do environmental stuff is partially because it’s required, but also over time there have been enough officials at high levels saying that if you don’t preserve the environment in which you train, you’re not going to be able to train.

It probably goes without saying that the military is a highly energy-intensive organization?

It’s crazy — millions of dollars every month between bases in this state, with Camp Grayling and Custer and the armories. We used to have a funding mechanism paying energy bills and fire programs in the same budget. The first year a big energy spike hit, we got no money for fire programs. We couldn’t get new equipment, couldn’t hire anybody.

So efficiency and renewable energy is a sort of investment that in the end could free up money elsewhere?

Absolutely. It works at the local level where there might not be as much visionary leadership because it saves them money. It frees up money in the pocketbook.

How significant is it that the U.S. military is preparing for climate change?

Here’s the thing that keeps me in my job and has me able to work for an organization that is generally not thought of as an environmental organization: When things were racially segregated so horribly, the military was the first institution in our country to take away segregation. GIS is our friend in the environmental field because the military took the technology and ran with it to the point that we’re able to distribute it to the common person.

Especially given this new executive order and the steps taken so far, the military has taken leadership on an issue so wildly important to the survival of our species. The power of the organization behind this issue is what keeps me working for the military.