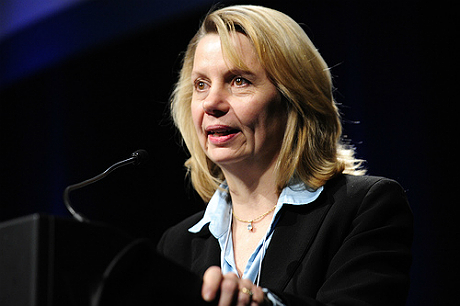 Ellen Anderson has served many roles in the past, all with a major focus on energy. As a Minnesota state legislator for 18 years she helped crafted the state’s renewable energy standard and community-based energy development legislation.

She also spent around a year as a regulator heading up the Minnesota Public Utilities Commission until the Legislature failed to confirm her.

Earlier this year Anderson’s career took a new turn when she became executive director of The Energy Transition Lab at the University of Minnesota.

The lab will bring together the University’s deep strength across many disciplines related to energy — from policy to science — to create tools that communities around the nation and the world can deploy to strategies for reducing carbon, improving efficiency and increasing renewables.

She’s the first to concede that in Minnesota an energy think tank is hardly the rarest of birds and, if anything, the energy policy community is a pretty crowded neighborhood. Yet she thinks the Energy Transition Lab, housed in the Institute on the Environment (IonE), can serve as a focal point for helping communities around the nation reduce carbon by working with government officials and community leaders.

She’s hoping to match their needs with university experts who may have policy ideas that could be applied to their specific situations. The Energy Transition Lab also is studying oil and gas exploration in the Arctic Circle, energy justice among Alaska’s indigenous people and sustainability in urban and suburban areas.

The lab will focus on a potentially fertile mix of topics, from energy efficiency and renewable energy to environmental justice issues. Calling it a “lab” might be a bit of a misnomer because the office resides in the law school and the work requires no lab coats or beakers.

But the intention is the same — to offer a place where ideas can be shared and collaboration can happen as communities work to increase renewable energy and reduce fossil fuel-based power sources.

Created with funding from the IonE in partnership with the Office of the Vice President of Research and the Law School, the Energy Transition Lab includes its faculty director Hari Osofsky, a law school professor. Within the law school Osofsky directs the Joint Degree Program in Law, Science, and Technology.

Lewis Gilbert, interim director of the IonE, said he wants to tie together the U’s expertise in solar, wind, biofuels and smart grid with legal and policy scholars to develop a framework for distributed renewable resources.

Gilbert sees the current centralized power generation eventually giving way to a decentralized grid, but getting to that end point will require plenty in the way of research, analysis and thought leadership.

“There are things in how we make and enforce rules that will get in the way” of a distributed energy network, he said. “We believe we can create policy alternatives and create a resource that can answer questions and help regulatory bodies and others (in their efforts) to evolve our energy infrastructure.”

The summer and fall the lab moved into working on three areas — local, state and international issues. “What we’re trying to do is work at broader scale by bringing cities to see how they can collectively work together and learn from each other,” Anderson said. “We’ll be looking to our university experts to provide tools that a lot of cities can use to plug and play.”

Anderson wants to focus on “carbon reduction goals specifically” and give cities tools that might take into account a population, growth trajectory, residential mix and geographic scope to “figure out what are most cost-effective strategies you can undertake to reduce energy expenses and make your energy use greener.”

The first project involves trying to identify the best tools to expand rooftop solar in Minnesota, including what might work to reduce upfront capital costs, Anderson said. In addition, she’s studying what the barriers to rooftop solar are and what finance tools would work to produce more installations.

Another budding effort focuses on energy exploration in the Arctic Circle and the rights of indigenous people in the region. Anderson sees it as a “battleground” in a future fight over energy claims because the Arctic is so rich in oil and natural gas.

Osofsky, who has spoken and written about the issue, explained that the Arctic has 13 percent of the remaining oil in the world, and 30 percent of its natural gas. Eighty percent of those energy sources are offshore. Climate change has made offshore drilling “more acceptable” and feasible, despite still frigid temperatures, she said.

The United States will chair the Arctic Council — an organization of countries and people in the region — next year and Osofsky believes the Energy Transition Lab could help synthesize issues and recommendations regarding oil and gas exploration, The lab could also look at the issue of indigenous people in Alaska lacking affordable energy and looking at renewables as a solution.

For many energy issues the lab could offer information, expertise and lead efforts to convene government officials and stakeholders in a “neutral forum for people to come together and make constructive, bipartisan process,” Osofsky said.