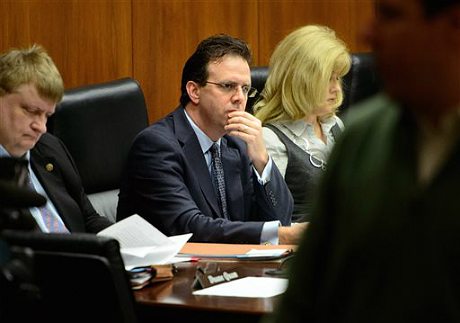 Veteran Republican lawmaker Pat Garofalo has been driving to the Minnesota State Capitol and his private sector job in style in his Tesla Model S, which he purchased in November.

Electric cars are “where the future is,” Garofalo said. “Electric cars allow people to be in charge of their fuel bill and that money stays 100 percent in the local utility market. It’s about having better performance, being in charge of your own energy bill — if that’s not good enough for you, it’s also a lot better for the environment.”

The 43-year-old suburban legislator, who also works as a voice and network engineering consultant, won’t disclose the cost of his Tesla, which retails from $70,000 to $93,000. It replaces a more modest 2007 Ford Fusion as his primary means of transportation.

Garofalo will play an important role at the Minnesota capitol this year as chair of the newly formed House Job Growth and Energy Affordability Policy & Finance Committee. He jokingly said he’d like all references to that committee to feature the word “powerful” before the title.

First elected in 2004, Garofalo is also a fan of renewable and domestically produced energy, and last session he authored a bill (also backed by Fresh Energy, where Midwest Energy News is based) requiring utilities to offer off-peak charging rates for electric vehicles.

Garofalo spoke about electric cars and the upcoming session in a recent interview with Midwest Energy News.

Midwest Energy News: Why did you buy a Tesla?

Garofalo: I am an engineer, so I am fascinated by the superior performance of an electric motor versus a standard internal combustion engine. I originally learned about electric transportation when I found out that railroads take diesel and convert it to electricity before they power locomotives. I was fascinated by that. That tells me an electric motor is a superior form of transportation propulsion.

Did you look at other electric cars, such as the Chevy Volt or the Nissan Leaf?

How many miles can you get on a charge?

Two hundred and seventy miles — if I drive the speed limit in a reasonable fashion. In Minnesota the cold weather reduces the range. I’ve seen it drop in cold weather with subzero temperatures to 190 miles. Still, it’s more than enough range for a vast majority of daily users.

About 30 miles, either at my private job or at the Capitol.

How has plugging in your Tesla changed your electric bill?

Off-peak metering for electric vehicles is only four cents a kilowatt hour, so you’re talking about replacing a fuel bill of $200 to $240 a month with an electric bill of $25 or $30 a month.

Are you the only Republican you know with an electric car?

I don’t know, but I suspect you’ll see a lot more Republicans, Democrats and Independents buying electric vehicles in the years ahead. Henry Ford and Thomas Edison were friends and Edison argued strongly vehicles should be electric because there are fewer things that can break and you don’t have to deal with gasoline. But Edison was unable to figure out the energy storage problem. Now we’re seeing breakthroughs in energy storage that will allow electric transportation to happen.

Are we building the right infrastructure to do this?

The beautiful thing is we have an electric grid with electricity serving the vast majority of homes in our state. We don’t need to build out public infrastructure. The focus should be on individual citizens upgrading with a second outlet at home with a 240 volt connection.

What about public policy? Are you saying we don’t have to do anything?

From a public policy perspective we have to make sure that electric cars, when they’re plugging in at home, are actually charging overnight. There’s a big difference between the middle of the day and the middle of the night. If people plug in the middle of the day it will cost everyone a lot more money. By plugging in at night it saves the electric car owner money but more importantly it saves everyone else a lot of money because they don’t have to pay for it The more we can move elective energy use to the overnight hours, the more we all save money.

You say it helps the environment, but a University of Minnesota study points out if electric cars use power from coal-fired plants they end up polluting more than cars using gasoline. What’s your take?

The U of M study measures the wrong thing. It is like saying Johnny Manziel had a bad year because he didn’t hit any home runs. It is a factually accurate statement, but it means nothing. The reality is nobody uses 100 percent of any energy source when they are plugged into the grid. It is a portfolio with a wide range of energy sources. That portfolio is way cleaner/cheaper than gasoline/diesel.

What are your plans for the House Job Growth and Energy Affordability Policy and Finance Committee?

We’re going to listen and learn. Utilities can be big beneficiaries of seeing this extra load (from electric cars) on their system without having to build capacity. Consumers can benefit from lower prices for the transportation fuel. And there’s environment benefits. I feel confident Republicans and Democrats can work together and put in place some good policies for Minnesota.

I would be reluctant to call them proposals now because I want stakeholder involvement. I want to be a neutral arbiter of competing visions. We’ll have a discussion and the best and brightest ideas will rise to the top. I think you’re likely to see policies in Minnesota that make it easier to purchase electric vehicles and to incentivize those purchases. The specifics remain to be seen.

What else are you seeing?

There’s a nationwide movement away from legacy diesel and gasoline transportation fuel and a movement toward natural gas and electricity. This is a huge transformation and it’s not going to happen overnight. I think you’re going to see more and more of these products with more and more consumers being interested in them. You see situations where people will be able to plug in their natural gas or electric vehicle at home. That’s a tremendous opportunity for our state.

What about natural gas vehicles?

What you’re seeing more of now are fleet vehicles in a hub and spoke environment — like garbage haulers or school buses — who go on their routes and come back to one place and plug into a natural gas line and fill up. Long haul semis are doing the same thing. We have a surplus of natural gas in this country and it’s much better for the environment than gasoline. Converting diesel fleet vehicles to natural gas is a huge opportunity to both save money and reduce pollution.

What about the controversies over silica [frac] sand?

Silica sand is an necessary component to access that shale gas. I would rather have sand from Minnesota, mined in a responsible way as opposed to imported sand from other locations with lower environmental standards.

How do you see the energy market shaping up?

Three big things are happening in energy right now. Number one, renewables are getting more affordable. Number two, you’re seeing advancements in energy efficiency. And three, you’re seeing the shale gas revolution changing the world. It is a world changing event. You’ll see Minnesota moving forward on policy that reflects all three of those.