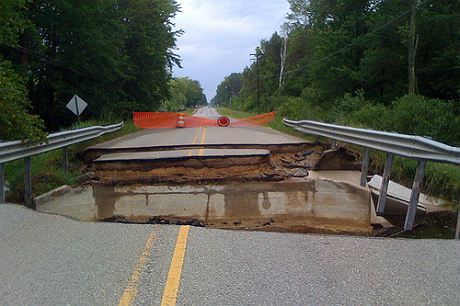 A flood-damaged road near Ludington, Michigan in 2008. Extreme weather events resulting from climate change are expected to take a heavy toll on infrastructure in the future. (Photo by Josh Bis via Creative Commons)

In towns up and down Michigan’s Great Lakes coastline, one organization is stepping into planning efforts to make those places more resilient to the effects of climate change.

Resilient Michigan, a project of the nonprofit Land Information Access Association community planning agency, has spent the past year and a half in five towns updating master plans to account for planned changes associated with climate change. Its aim is to expand to more places in Michigan, possibly inland if funding is available.

“We saw a lot of climate adaptation plans (in cities throughout the state) that seemed like separate, stand-alone documents,” said Resilient Michigan planner Harry Burkholder. “They didn’t integrate well with day-to-day planning activities, master plans or ordinances. This seemed pretty important: Could we integrate a resilient adaptation plan with conventional master planning processes?”

It’s been less than two years since the project began and each of the five communities — St. Joseph, Grand Haven, Ludington, East Jordan and Monroe — are still working on their new plans. The group is launching an effort in another west coast town, Holland, this month. Funding comes from a variety of organizations, including the Kresge Foundation, the Americana Foundation, the state of Michigan and the University of Michigan.

In most cases, details about energy policy have not been worked out, but the topic is certain to receive consideration, Burkholder said. It could take the form of zoning ordinances for new generation or simply overall goals the community wants to meet. Some municipalities are already leading by example in efficiency.

Retrofitted municipal buildings are an “opportunity for people to see how things work and people can see it’s doable,” said Whitney Waara, executive director of the Land Information Access Network.

And while most of the planning centers around the economics of tourism, one of those places — Monroe County, about 40 miles south of Detroit and the only east coast community working with Resilient Michigan — is unique for its close ties to the energy industry. DTE Energy, the state’s largest investor-owned utility, has a major coal-fired power plant and a 1,100 MW nuclear plant in the area. This fact received special attention in Resilient Michigan’s report from October 2013.

“The economic impact of renewable energy in the Monroe Community is dwarfed by the two more traditional generation facilities,” the report says. “However, perhaps owing to its long-time role as an ‘energy town,’ this Community is demonstrably more aware of costs, benefits and new opportunities in energy generation and smart use.”

The area already is saving tens of thousands of dollars a year from energy efficiency measures, the report notes: “Efficient use of energy is a crucial component of a resilient community. Reduced energy usage also reduces costs, pollution, and vulnerability to disruptions in supply.”

Burkholder added that Monroe County “was kind of forward thinking about its energy future” because of its close ties with DTE.

While most of the towns taking part in the project are on the west coast, which is notable for its support for conservative politicians, Burkholder said these places were “actually more receptive about ideas of climate change. On the east side, we had to tone down some of the language we use or even come up with words that address climate change and adaptation without saying those words exactly.”

The Associated Press documented this issue in September, showing climate adaptation work being done throughout the country, including in Michigan, without calling it that. (One of the towns profiled was Grand Haven, which is working with Resilient Michigan.)

That may be starting to change, though, as communities live through extreme weather conditions like last year’s severe flooding in southeast Michigan.

“If we would have done this two and a half years ago, I think (the community’s) attitude would have been different. It was perfect timing for (climate change) to be brought up,” he said. “It’s on everyone’s list now.”

Sticking to a plan and state support

A challenge for this type of community-wide planning when new development occurs is in actually conforming to a master plan once it’s in place. A developer may seek zoning or land use exemptions that are contingent on the project happening.

Wide community buy-in for the final plan, Burkholder said, is a remedy for that.

“We believe that through a robust and active civic engagement process, you get the vision and goals that really speak to the community,” Burkholder said. “When you have that kind of participation, those ideas are firmly footed with what the public wants.

“It’s easier said than done, but we believe civic engagement is a big part of that.”

Moreover, at least in East Jordan’s case, overhauling the city’s master plan (which Cannon said hasn’t been updated since 1999) is an opportunity to follow something that’s relevant, Cannon said.

“We’re starting from scratch, is what we’re doing,” he said.

When the topic turns to ways in which towns can be more energy independent (or, “resilient”), perhaps through more local, distributed generation, the state of Michigan has yet to take a leadership role for a statewide policy, said Matt Howell of Resilient Michigan.

“In other places, the state is really a driver or not of incentives like that,” he said. “In some other places I’ve lived, it’s a priority of that state to get that done. I think it’d be great to see that kind of leadership here.”

In the last legislative session, a bipartisan group of lawmakers introduced an “energy freedom” bill package that addresses these issues. It remains to be seen whether that legislation is taken up again in 2015.