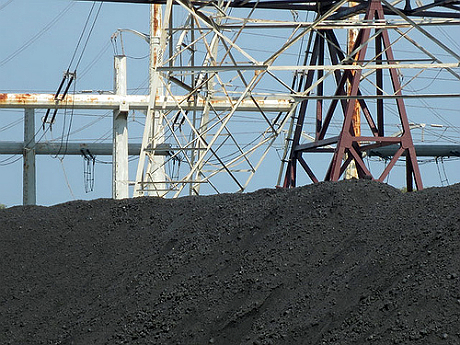 Petroleum coke piles along the Calumet River in Chicago in October. (Photo by Josh Mogerman via Creative Commons)

The battle over storage of petcoke in Chicago continued Tuesday with the City Council’s zoning committee passing an ordinance that would order the city planning and development commissioner to set limits by the end of March on how much petcoke can be moved through KCBX Terminals’ facility on the Southeast Side.

Alderman John Pope, who represents the neighborhood, and environmental leaders and community activists testified in support of the ordinance, while KCBX’s president and two environmental consultants hired by the company testified that dust from the facility is not harming local residents and that stricter limits are not needed.

If the ordinance is passed by the full City Council, it remains to be seen how strict the limits will be, and how rigorously they will be enforced.

Public health department rules that took effect last year limit the footprint of petcoke storage facilities and require enclosure of operations and dust-suppression measures. But local residents are upset that KCBX has requested variances allowing them exemptions from those rules. Most notably, the company is requesting an extra 14 months to enclose the petcoke piles, and the company has said they cannot complete the enclosure more quickly.

At the hearing Tuesday, local residents and attorneys with the Natural Resources Defense Council and the Environmental Law & Policy Center all called for limits of “zero” petcoke through-put, a de facto call to shut down or freeze the operations.

“Science shows there is no safe point other than zero” for emissions of fine particulate matter like petcoke dust, testified Brian Urbaszewski, environmental programs director of the Respiratory Health Association of Metropolitan Chicago.

“Once the city acknowledges these harms, how can the commissioner set any limit other than zero?” asked Lydia Jordan, representing the Southeast Side Coalition to Ban Petcoke. “It collects on homes and cars, it prevents people from being able to enjoy outdoor spaces, it impedes economic development, it doesn’t bring in jobs, it precludes other industries and nice things like shops and cafes from moving into the Southeast Side.”

KCBX president Dave Severson meanwhile testified that if “unreasonable” through-put limits are imposed, it would “threaten our ability to stay in business.” KCBX has previously threatened to file a lawsuit if the city passes strict regulations.

Testifying on KCBX’s behalf, San Francisco-based environmental consultant Lyle Chinkin said he has never seen a “more robust” air monitoring system than the one KCBX has in place, and that those air monitors show particulate matter on the site is no higher than in surrounding areas and that occasional high levels actually come from air blown from other sources in the industrial area. “The monitors show air coming on to the property has just about as high a level [of PM10 particulate matter] as air coming off the property,” he said.

Another environmental consultant hired by KCBX, Harvard School of Public Health adjunct professor David MacIntosh, blasted the city’s own study showing evidence of petcoke on sidewalks in the area. City officials had previously criticized MacIntosh’s study showing no petcoke migration off-site, with then-public health commissioner Bechara Choucair lambasting it in an angry letter to KCBX in December regarding their request for more time to enclose the piles.

MacIntosh said that he visited the area about 50 times over 15 months, taking more than 150 samples. “In brief, I’ve found no evidence of impact on soil or surfaces in either South Deering or the East Side,” he said, referring to local neighborhoods. “The dirt on the ground, on buildings, on park benches and in furnace filters has the same chemicals in the same proportions as dirt anywhere else in Chicago, but notably very different from chemical composition of petcoke.”

Tom Shepherd, a leader of the Southeast Environmental Task Force, was among residents who said that regardless of studies, residents have observed real impacts since the amount of petcoke being stored expanded dramatically in recent years.

“Directly across the street from the gate of the company, there are only three lonely houses on the block, and a shutdown tavern and empty lots,” he said. “All three of those homes are up for sale, but there are no buyers.” People who are suffering health problems and want to move away from the facility feel stuck because they can’t sell their homes, Shepherd said.

“These are people who don’t have studies, who don’t have chemists and biologists at their disposal. But they are ready to talk about their personal experience, how they can’t keep their houses clean, how they can’t have a swimming pool in their backyard for their grandkids. They just can’t enjoy their own property.”