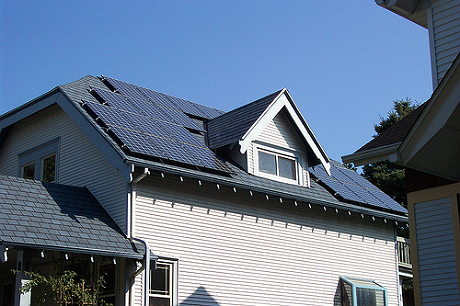 Solar panels on a home near Milwaukee.

For tourists, the “shoulder seasons” in the spring and fall are times to get cheap deals in ski resorts or beach towns that cater to summer and winter crowds.

For people with solar power on their homes, these seasons are when their solar installations are most likely to be producing more energy than the home actually needs. These “shoulder months,” as RENEW Wisconsin Policy and Program Director Michael Vickerman frames it, are at the crux of one of the ways solar power is under attack in Wisconsin.

We Energies, the most significant case, includes a provision that will change how the utility compensates consumers for sending energy back to the grid, by changing from annual to monthly “true-up” net metering calculations.

This may sound like an arcane modification. But Vickerman and other solar advocates say it means people will be compensated drastically less for the energy they send back to the grid during the spring and fall, and they are likely to build smaller solar installations as a result.

Unless an expected legal challenge to the Public Service Commission decision is successful, the true-up change will take effect in January 2016. WPS has done its calculations on a monthly basis since a 2013 rate case (docket number 6690-UR-122 on the commission’s website).

“Net metering policies are a compilation of multiple pieces, they all add up to favorable [or unfavorable] conditions and terms for the customers who are seeking to invest in onsite renewable energy and take more control of their energy future and energy bills. It’s a little tough to say whether the true-up issue is the lynchpin, but I will definitely say that this issue ranks higher than others as far as contributing to the overall best practices.”

Typically, at the end of the year utilities tally up how much energy a customer has used and how much they have sent back to the grid from their solar installations. Then the customers are either charged or compensated for the difference, or the energy they have “banked” may be put toward the coming year’s usage.

When someone produces more energy than they have used, there’s the question of how much to pay them for that energy sent back to the grid. This is where net metering policies defined by different state laws or determined by different utilities can vary significantly.

The customer with solar panels can be compensated at the retail rate – the cost they would have paid for electricity at that time; or the “avoided cost” rate, the amount the utility estimates it saved by not having to provide that amount of power to other consumers on the grid. The rate may also be determined through a formula based on several market factors.

When a solar installation produces less energy than a home uses during the true-up period, the way surplus energy is compensated is irrelevant, since there is none. But when someone is sending significant solar energy to the grid, different rates of compensation can add up.

That’s where the shoulder seasons become important. Most Americans use their highest amounts of electricity in the summer, with air conditioners running. Winter also usually means high electricity use, with more lights on when the sun sets early and electricity sometimes used for heating the home or heating water. In the spring and fall, by contrast, household electricity use tends to be lower. That’s when solar installations are most likely to send more electricity back to the grid than the home uses.

If net electricity consumption and generation is all tallied up at the end of a year, people essentially get to “use” their springtime solar power in the summer or winter when their demand is higher. But if the balances are tallied every month, consumers will often end up getting low avoided cost rate payments for their surplus energy during the shoulder seasons, then buying more electricity at higher retail rates in summer and winter.

“To set the buyback rate at something higher than avoided cost for customer-generated energy would set an inappropriate price signal and would be unfair to customers without their own generation,” Manthey continued.

How much does it matter?

Vickerman said surplus energy payment and true-up policies are typically figured in when someone decides what size solar installation to put on their home. If they won’t be paid much for unused energy, they may choose a smaller installation…meaning less clean energy on the grid.

Vickerman made these points in testimony before the Wisconsin Public Service Commission in 2013 regarding WPS’s change to monthly true-ups. He noted that companies who advise customers on installing solar use sophisticated “solar math” to decide what size system is most financially efficient, and the true-up period is an important consideration in that equation.

Vickerman gave an example of a 4,500-4,900 kWh system in Green Bay. That would seem a good fit for a home using 5,000 kWh per year. But given typical monthly fluctuations, based on widely accepted models, he estimated that household would have to sell 561 kWh per year back to the utility at the lower avoided cost prices.

That would represent a loss of about $55 under monthly true-ups compared to annual calculations. That would increase by 10 percent the time it would take the solar system to pay for itself in energy savings. Faced with that situation, Vickerman said, a customer might choose a smaller solar array.

“You need to look at all the pieces,” of a net metering policy, said Baldwin Auck. “One element can really have a domino effect on whether that policy is ultimately effective in encouraging people to install these systems.”

Baldwin Auck said that 22 states have “some form of annual true-up.” The “ideal scenario” for net metering, she noted, is “indefinite rollover,” where the excess energy someone has sent to the grid is perpetually credited to their account in a situation akin to a meter literally running backwards.

In California, state law says that a customer cannot be required to true-up more frequently than once a year. However some utilities offer customers the option to true-up monthly, saying it helps them avoid “surprise” charges once an annual bill is due.

PG&E in California, for example, calculates net metering on an annual basis, and at that time pays customers an annual rate of 4 cents per kWh for the surplus energy. Southern California Edison allows customers to receive a check for surplus energy at the end of the year or to roll over their credit into the next year’s billing cycle.

Illinois, Michigan, Iowa, Indiana and Minnesota all got B’s for net metering policies in Freeing the Grid, and Ohio got an A.

“The monthly true-up is much less common, and there is a strong correlation between states that have received an A or B grade on the scorecard, and annual true-ups,” Baldwin Auck said.

The value of electricity

Clean energy groups plan to challenge various aspects of the We Energies rate case. First they must file an administrative challenge with the Public Service Commission. If the commission denies that appeal, they can file a lawsuit in state circuit court.

“We will ask the commission to reconsider, though we have a pretty good idea what the commissioner will say,” said Vickerman. “It’s a process we have to go through.”

The commission’s approval of the MG&E rate case is also likely to be challenged. However the MG&E case does not change the true-up period.

“They were already doing the net calculations every month, but it didn’t matter when every kilowatt hour got the same credit,” said Vickerman. “Now they’re switching from a one-tier to a two-tier structure, and suddenly it matters.”

“We’re not happy with that, but on the other hand it could be much worse,” said Vickerman of the settlement.

Baldwin Auck said that in the debates over true-up policies and surplus energy rates, she hopes people don’t lose sight of the forest for the trees.

With a solar installation “You’re reducing onsite consumption, and on top of that giving energy back to the grid,” she said. “The credit a customer receives for that energy should be reflective of the full value of that electricity.”