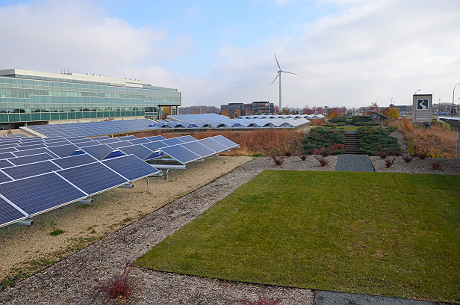 More than a year after being criticized by state regulators for being too coal-dependent, a Minnesota energy provider is taking another run at planning for a lower-carbon future.

In July 2013 the five-member Minnesota Public Utilities Commission took the unprecedented move of rejecting a long-range integrated resource plan submitted by Great River Energy due to its reliance on coal-fired energy generation.

The 3-2 vote led GRE to formulate some new strategies in a second version of the resource plan — that details energy consumption and generation for the next 15 years — that was submitted last October. The new plan calls for faster depreciation of two coal-fired plants, an end to a contract with an aging Wisconsin coal-based facility, increased conservation measures and more renewable energy.

“We looked carefully at the language of the order, and we think the commission will find it very acceptable this year,” said David Saggau, chief executive officer and president. “This is a plan our members feel comfortable with and they like the balance we’re striking. They’re very realistic about the transition that’s occurring in our industry and they like the steps that we are taking to address future resource needs.”

However, although the plan has met with support, some advocates contend it isn’t aggressive enough in reducing carbon emissions.

GRE’s new look at the future of energy resources is an important one because it has a prominent role in Minnesota. The utility serves 28 distribution cooperatives — primarily in Minnesota, with a handful in Wisconsin — that provide power to more than 1.7 million residents, or one third of the state’s population.

GRE purchases nearly 500 megawatts (MW) of wind energy and its members have been regional leaders in creating community solar gardens.

A decision by the PUC is expected by summer.

The commitment to coal led the PUC, for the first time in its history, to reject an integrated resource plan, which is basically a forecast of a utility’s strategies for the next 15 years regarding generation sources, sustainability, conservation and other long-term challenges.

Although the new GRE plan reduces carbon emissions, it has detractors who believe the utility has made only tepid steps toward transitioning to a cleaner energy generation mix.

By 2029 the plan calls for GRE to derive 58 percent of its energy from coal-fired plants, a decrease from the current level of 67 percent. However, J. Drake Hamilton, Science Policy Director of Fresh Energy (where Midwest Energy News is based), pointed out that most utilities’ current share of coal is less than 50 percent, and closer to 40 percent many months of the year.

Under the plan, GRE remains “very far from a leadership position,” said Hamilton. “What they’re proposing doesn’t take any positive steps beyond what is already required under Minnesota law on carbon pollution. In fact, in one key area they don’t even meet their fair share of the science-based carbon reduction goals that is in law in the 2007 Next Generation Energy Act.”

By comparison, Xcel Energy’s resource plan released earlier this year predicts a 40 percent reduction in carbon emissions by 2030. The difference in carbon reduction goals between the state’s two largest utilities, Hamilton pointed out, offers “a clear distinction” between the two paths.

Leigh Currie, staff attorney with the Minnesota Center for Environmental Advocacy, said the two issues she plans to look into further are what appears to be a less than aggressive push for energy efficiency from customers and high reserve margins.

The plan will meet the state’s goal of having utilities reduce energy demand by 1.5 percent per year but seems to do so mainly by improving the efficiency of power plants rather than by working more closely with customers to lower their power use.

The power reserves GRE holds to meet peak demand days seem high and costly to customers, Currie added, even when considering its focus on reliability. The plan calls for no retirements of GRE’s own generation plants, she said, and that may be a point that MCEA raises later.

On the other hand, she likes GRE’s commitment to wind and hydro in the future and that its emissions “are moving in the right direction.”

Laureen Ross McCalib, GRE’s manager of resource planning, said the utility used the Environmental Protection Agency’s Clean Power Plan and the state’s carbon reduction rules when formulating the plan. She points out that the goals require not just utilities but agriculture, industry and other economic sectors to contribute to carbon reduction.

“It’s not specific to utilities but we’re working to help the state meet that goal,” she said. GRE is ahead of the state and federal government’s 2015 goal for carbon reduction now, said McCalib, and will be close to the 30 percent goal in 2029/2030. The utility also operates coal-fired plants in North Dakota, which leads to a different set of regulations, she said.

Energy efficiency remains a goal, she said, but it’s harder for GRE to do much on the customer side since it only deals with consumers, not large companies.

“This a plan in progress,” McCalib added. “It’s hard to make a decision today about what you might do in 15 years.”

Great Plains Institute’s executive director, Rolf Nordstrom, managed two day-long stakeholder meetings for GRE and has an executive of GRE on his board. “Given where they have been and how disproportionally coal-based they have been that actually represents considerable movement,” he noted.

“You could make the argument it’s not enough given the urgency of the climate situation. But in relative terms given where they have been, it’s progress.”

A closer look at GRE

Perhaps no other utility in the state deals with such a variety of customers, from co-ops operating in urbanized areas near the Twin Cities to rural outposts in the central lakes district and the prairie areas of southwest.

Unlike other utilities, GRE only owns coal-fired plants outside the state’s borders in North Dakota, among them Coal Creek Station (1,163 MW), Stanton Station (187 MW) and Spiritwood Station (99 MW). The $437 million Spiritwood Station had a troubled start, having been completed in 2012 but not opened until only a few months ago due to sluggish demand and low power prices.

The utility also has a mix of renewable energy it purchases, including wind, hydro, solar and fuel from a garbage-burning station in Elk River. As it stands, GRE receives 67 percent of energy from coal-fired plants, 11 percent from non-hydro renewables, 13 percent from hydro, six percent from purchases and three percent from natural gas. In 15 years the renewable figure jumps to 18 percent.

A visit to GRE’s Maple Grove headquarters offers a glimpse of a commitment to renewable energy. The award-winning building features a 254 kW solar ground level installation that serves as testing platform. The building also has a solar installation on the roof.

The headquarters incorporates many design principles based on energy conservation and clean energy, with approaches ranging from daylighting to geothermal power, sustainable materials to energy conservation. It was one of the first commercial buildings in Minnesota to be certified LEED platinum by the U.S. Green Building Council.

The marquee appeal of solar energy has been embraced by GRE and its members, and not just at headquarters. GRE has been installing 20 kW solar projects at 18 co-ops. Several co-ops piggybacked on the GRE solar projects to build their own community solar gardens.

Under the solar garden program co-op members receive credit for energy produced by solar panels they own or through a subscription. The state’s largest solar garden — so far —  is run by Connexus Energy, a GRE member co-op, and another member, Wright-Hennepin Electric Cooperative Association, opened the first one in the state.

Saggau said he’s “not surprised at all” by the growth of solar gardens. “Our owners want community solar we want to facilitate that with them. I see that as a win-win. We’re right there with them.”

Though “excited” by the potential for renewables, Saggau does not see them as cost-effective quite yet. The primary issue for GRE is the problem of storage — of storing kilowatts produced by the strong winds that blow at night and using that energy during peak hours of the day, for instance.

Wind, in fact, is a significant part of the energy mix but expansion is more than a decade off. The renewable portfolio is so strong, said McCalib, that the utility has no plans to add to wind to until 2026.

“We’re ahead of the game,” she said, in generation from renewables, but may entertain adding more within the decade should attractive opportunities arise.

Taking into account all these efforts, GRE felt a hard sting from the PUC smackdown.

“We were surprised,” McCalib said. “The resource plan itself had all the statuary and legislative requirements. It showed what our load projections were going to be, what our resources were going to be, how we evaluated new options for resources and how we were meeting the renewable energy requirements. In our view it had everything that was required for a resource plan filing. It caught us by surprise.”

The resulting new resource plan contains 160-plus pages of detail. Perhaps the biggest nugget to come out of new plan is the quicker depreciation of two coal plants by 15 years. McCalib suggests it’s a bit like paying off your house early to free up the money for other investments.

By 2028 GRE can “rethink what we want to do with those units,” said McCalib. One of the options would be to close them down if its power generation needs can be met through other, cleaner sources.

The new plan readjusts the utility’s electricity demand forecast to less than one percent annually, based on modeling rather than the former process of asking members to estimate their needs, she said. The utility also plans to add 600 MW of hydro starting in 2020 through an agreement with Manitoba Hydro.

Despite a history of reliance on coal, co-op leaders readily agreed carbon reduction should play a big role in future planning. Board chair Mike Thorson said there was no dissension in the ranks. “We think the plan offers us the flexibility going into the future,” he said.

GRE’s twin goals are affordability and reliability. Saggau mentions them often in interviews, highlighting the fear that moving too aggressively toward renewables might cost too much or cause havoc on the grid.

Yet if storage issues become less of a factor and the cost of renewable energy continues to plummet, especially in the solar market, GRE could veer from its plan. The trajectory of the industry toward cleaner emissions is a permanent factor, he added.

“This is a snapshot today of how we see the future,” Saggau said. “But these are fluid plans. As reality changes we will incorporate new sources into our generation fleet if we they have affordability and reliability. If they have those elements we will use them.”

Fresh Energy, the MCEA and the Great Plains Institute are members of RE-AMP, which publishes Midwest Energy News.