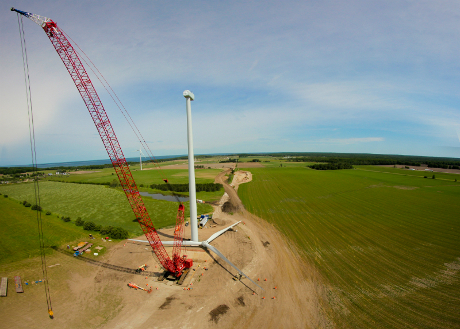 Construction of the Garden Wind Farm in Michigan in 2012. (Photo via Heritage Renewable Energy)

In a small community on the southern coast of Michigan’s Upper Peninsula, a 28 MW wind farm remains a focus of dispute among landowners, some of whom are bringing the developer into yet another lawsuit over claims about noise.

Traverse City-based Heritage Sustainable Energy’s wind project in Garden Township, along with the U.S. Fish and Wildlife Service, is the subject of a lawsuit filed this month in federal court in Marquette. It’s the second suit against the company in a year. Heritage settled a case out of court over six months ago when residents near its Stoney Corners Wind Farm in the Lower Peninsula alleged it was causing health problems.

The 14-turbine Garden Wind Farm, located west of Escanaba, became operational in September 2012 and was the first wind project in the U.P.

A company official, who claimed he first heard of the lawsuit when contacted by the Associated Press last week, said Heritage has been working with local residents over noise concerns. In an interview, he disputed claims made in the lawsuit over the project’s threat to migratory and endangered bird species, based on studies to be released in the coming months. He said that the company had not been served with any legal documents pertaining to the suit as of Thursday night.

“We’re trying to work through issues with those who have some annoyance with sound and shadow flicker,” said Rick Wilson, Heritage’s vice president of operations. “We think we can work with them to resolve the issues.”

However, the lawsuit claims that nearby residents have endured disruptive noise and decreased property values since the project became operational, contrary to what the company had told them initially.

“Heritage, through the construction and operation of the Heritage Wind Farm, will continue to unreasonably harm the Individual Plaintiffs, their lessees and guests by subjecting them to disturbing and incessant noise, vibrations, shadow flicker/strobe lighting, and flashing red lights which has caused nausea, headaches, sleep deprivation, vertigo, dizziness, anxiety, and diminution of property values,” the suit says. Building near the citizens’ properties was “intentional and unreasonable, negligent, and reckless,” the suit claims.

Further development at the site, the suit adds, will cause increased “takes” of species like the Kirtland’s Warbler, piping plover, Northern long-eared bat and bald eagle.

“Hence, Heritage’s activities and (U.S. Fish and Wildlife Service’s) failure to properly regulate those activities will make it more difficult for plaintiffs to observe and enjoy these species and to enjoy the benefits of the species,” the suit says. Landowners are being represented by Topp Law in Gaylord, which specializes in energy and environmental litigation.

The citizens also allege that Heritage’s activities are violating the Michigan Environmental Protection Act. The plaintiffs are seeking a temporary restraining order or injunction against Heritage’s expanding, as well as compensation for legal and other fees.

Wilson said the company has been working with the U.S. Fish and Wildlife Service since 2007 over concerns the department raised over bird species, some of which are endangered. He said results from the latest scientific studies over bird deaths will be released to the public “within the next several months.”

“There is no correlation between the relationship with the wind farm and the shoreline and any potential increase in fatalities,” he said. “Our 14 turbines kill no more birds than a single feral cat. We’re looking to be somewhere in the range of three to four birds per turbine, per year.”

The development in question is known as phase I of Garden Wind Farm, and the company had tentative plans for two more phases.

“We have what we think are opportunities to build more but we don’t have immediate plans to expand that project at this moment,” Wilson said. “It’s a matter of a power purchase agreement and the current economic climate right now.”

Since its beginning, the project has divided the small community of roughly 1,000, according to Garden Township Supervisor Raymond Young. It’s a picturesque landscape on Big Bay De Noc in northern Lake Michigan, with the turbines situated mostly on an area of flat farmland.

“Very controversial. Very controversial,” Young repeated by phone last week. “I don’t care how you look at it, they’re noisy. That’s where the whole complaint comes from — people can’t get a good night’s sleep. I’m not taking a side, but the complaints I get, which are numerous, are all about noise.”

Recent research has failed to find direct link between human health and wind turbines, though there are connections between exposure to noise and annoyance. The American Wind Energy Association says “allegations of health-related impacts are not supported by science.”

Researchers have also found no statistical evidence that wind turbines impact property values in general, but the lawsuit says county officials have already lowered assessed values on some properties because of “proximity to [a] wind energy device.”

“It’s important to keep in mind that there are no free rides,” said John Anderson, director of environmental affairs and permitting policy for the AWEA, referring to the trend of litigation nationwide challenging turbines’ affect on lifestyles. “Our society is power hungry and requires a huge amount of energy to operate as a modern society. No form of energy is free of impact, and wind power is no exception, but studies show wind power impacts to be the lowest.

“There is always going to be someone who feels negatively affected. We can’t have a society dictated by a few loud opponents.”

Heritage is also playing offense in the courtroom, having filed suit against nearby Schoolcraft County this month over what it claims is an overly restrictive zoning ordinance against wind development.

Young took office shortly after the project began operations. “I can say that (Heritage) made promises they didn’t keep, according to the people I get complaints from,” he said.

The township recently passed an ordinance that would use police powers to limit the noise between 10 p.m. and 6 a.m., Young added.

The project has been so controversial — in a familiar case of pitting those benefitting from leasing land to those with aesthetic and other concerns — that local sheriff’s deputies had to start coming to public meetings, he said.

“Relatives aren’t speaking to each other. People I’ve known 40 years won’t talk to me,” Young said. “We have divided this community between those who are leasing and those that aren’t and don’t like the noise.”