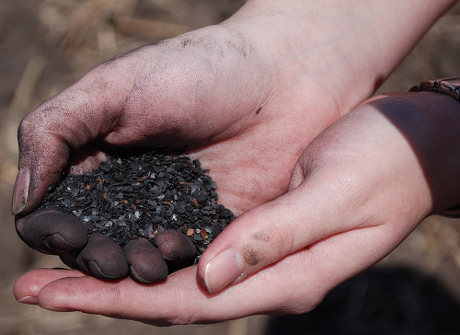 Researchers at Iowa State University are trying to determine whether crop residue could pay off in three ways simultaneously: as a source of biofuel, as a soil enhancer, and as a long-term sink for carbon dioxide.

At the heart of their investigation is a heating process known as pyrolysis that turns plant matter into biochar, a charcoal-like substance that seems to tie up carbon dioxide for hundreds of years.

“The concept of biochar was not invented here,” said Robert Brown, Iowa State’s Anson Marston Distinguished Professor in Engineering and director of its Bioeconomy Institute. “What we’ve done is to take it to an industrial scale. We were among the first to say, ‘Let’s look at our ability to translate this to a system where you get an energy benefit and a net greenhouse-gas reduction.’”

When pyrolyzed at high heat with little or no oxygen, plant residue generates two byproducts: an oil that can be turned into any of a variety of fuels, asphalt or a wide range of chemicals; and biochar.

And when put into the ground, biochar seems to hold tight to its carbon load. According to research done by David Laird, an agronomist and one of the leaders of the biochar initiative at Iowa State, pyrolysis converts carbon into a very stable form that doesn’t break down for at least 100 years, and possibly as long as 1,000 years.

Plant residue left on the field or processed into cellulosic ethanol, by contrast, returns its carbon to the atmosphere rather quickly.

“Think of the process as the reverse of a coal-fired power plant,” Brown said. “We’ve taken carbon dioxide out of the atmosphere via the plant, and we’re going to put it in the ground. If we put that biochar into the ground and it stays there, we have had a net reduction in CO2 in the atmosphere. That’s where we get carbon-negative energy. We’re putting it in at a rate higher than it can be drawn down.”

In a paper published in 2008, Laird calculated that there’s enough plant refuse in the U.S. to produce 1.9 billion barrels of bio oil yearly. That plant refuse is plentiful, but variable, across the country.

“We need to look regionally at, ‘What are the biomass sources, and are they usable in a pyrolysis/biomass platform?’ ” Laird said.

Laird’s team is primarily focused on whether biochar could help maintain soil quality when crop residues and other forms of biomass are removed for purposes such as ethanol production.

“Our goal is to evaluate char as a potential soil amendment for enhancing sustainability of biomass harvesting,” he said. “There are lots of sub-goals under that — trying to determine what char is, how it functions in the soil, how it interacts with water and micro-organisms and crops.”

He estimates that, if the vast majority of the country’s plant waste were pyrolyzed, it could produce enough bio oil to displace about 25 percent of the oil from fossil sources that is now burned yearly in this country. Although burning the bio oil would return carbon dioxide to the atmosphere, that carbon would have been taken from the atmosphere, not from the ground, as is the case with fossil fuels.

Meanwhile, Laird projected that a fully mature US pyrolysis-biochar industry that produced bio oil for use as fuel and biochar for use as a soil amendment could offset roughly 10 percent of average yearly U.S. emissions of carbon dioxide.

He called that the maximum “that we could realistically hope for.”

Iowa state Sen. Rob Hogg, for one, is a believer in the potential for this technology to slow the global build-up of carbon dioxide. He hopes during the current legislative session to steer some state money to the Bioeconomy Institute for support of the biochar initiative and other projects.

“I think there’s an opportunity for Iowa to advance carbon-negative technologies,” he said. “Iowa is uniquely situated to be a leader in all bio-based technologies. Iowa State’s Bioeconomy Institute needs financial support from the state legislature. I think that’s a really high priority.”

High on the research team’s wish list: a bigger pyrolyzer.

“Our pyrolyzer consumes a quarter-ton of biomass a day,” Brown said. “That’s not at the scale that David wants to be doing. He wants to get out there and put this material down on many acres to demonstrate this ability. We’re trying to move that program forward. We need to build a pyrolyzer that burns not a quarter-ton per day, but 10 tons per day – or greater. David would have us burn 100 tons per day. We looking at scaling up this technology.”

Brown said he’s hoping to grow the biochar project enough that, “At the end of the day, we can say ‘Here’s how much we can reduce CO2, here’s what it will cost, and here’s the benefit it will produce.’ ”