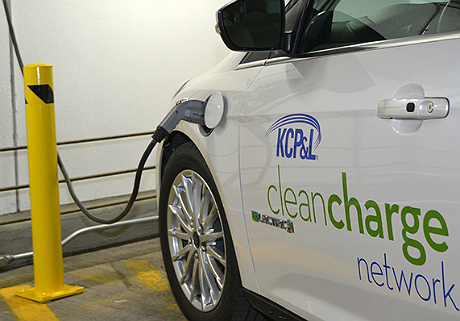 A Midwestern utility is jumping headlong into the electric-vehicle charging business with plans to build and operate more than 1,000 public charging stations in the Kansas City metro area by midsummer. That’s more than currently exist in the states of New York, Massachusetts or Illinois.

Kansas City Power and Light Co., a unit of Great Plains Energy Inc. with more than 800,000 customers in western Missouri and eastern Kansas, unveiled its plan Monday afternoon — easily the most ambitious effort yet by an investor-owned utility to tap a transportation market dominated for decades by the petroleum industry.

KCP&L began constructing its Clean Charge Network late last year and by midsummer will have a system able to support a market with 10,000 plug-in vehicles, said Terry Bassham, CEO of the utility and its parent company.

Developed with partners Nissan and ChargePoint, the EV stations will be able to charge two cars at a time. They’ll be grouped in “nests” of three to five at 225 commercial locations such as supermarkets and malls. KCP&L will also provide two years of free charging, meaning EV owners will be able to fuel up for the equivalent of 70 to 75 cents a gallon, the utility said.

The strategy is a bold one in an industry that still clings to a century-old business model and is frequently criticized for resisting new ideas. KCP&L’s plan is also sure to prompt big questions, since the company plans to ask regulators in Missouri and Kansas for permission to pay through the $20 million cost of the charging network to ratepayers.

For KCP&L, long seen as another stodgy Midwestern coal-burner, the unveiling of the plan follows a series of announcements all tailored toward greening its generating portfolio.

In recent months, the utility has expanded its energy efficiency programs, agreed to add another 400 megawatts of wind generation to its fleet, and most recently announced plans to retire a half-dozen coal-fired units (EnergyWire, Jan. 21).

But there are challenges, too. While KCP&L and other utilities face millions of dollars in capital costs for environmental controls at fossil plants and other infrastructure, efficiency programs and increasing interest in rooftop solar and distributed-generation technologies are eroding sales.

KCP&L sees the public charging network as a way to sell more kilowatt-hours but do so in a way that maximizes use of the existing grid and spreads those higher costs across a larger base of kilowatt-hours to keep bills lower than they would otherwise be.

Enabling more efficient use of the grid and helping to slash tailpipe emissions by encouraging EV adoption has also won allies in the form of environmental groups such as the Natural Resources Defense Council.

“By stimulating electric vehicle adoption … what KCP&L is doing is encouraging people to use the electrical grid more efficiently and drive down the cost of electricity for everyone,” said Ashok Gupta, NRDC’s senior energy economist.

Ultimately, the decision whether to allow the utility to pass those costs on to customers will be made by agencies that set utility rates in Missouri and Kansas.

KCP&L has rate cases pending in Missouri and Kansas and plans to seek recovery of costs for the EV network plus a return on investment in both states, Caisley said.

A station for every car

By KCP&L’s own market research, there are about 900 plug-in vehicles in its Kansas City service area.

And statewide, Missouri and Kansas each have about 170 EV public charging outlets right now, according to the Department of Energy’s Alternative Fuels Data Center.

But the utility sees adoption rates for EVs paralleling growth in hybrid vehicles 12 to 15 years ago.

While 1,000 charging locations for a market with fewer than 1,000 EVs might seem excessive, utility executives believe it’s essential to develop a charging infrastructure with the scale and density to eliminate “range anxiety” — a leading deterrent among consumers considering plug-in cars.

An extension of the grid

KCP&L sees the charging network as not just electrical outlets, but an extension of its distribution grid — one that will play a role in demand-response programs and, while still years off, perhaps the ability to use EVs as a generation resource.

Most vehicle charging will be done at owners’ homes overnight or at private or public stations on weekday mornings when commuters get to work.

With the charging network owned and operated by the utility that manages the distribution grid, KCP&L will know what stations are being used and when they’re being used and can even limit their use during times of peak demand, Caisley said.

For instance, a nest of charging stations might require 30 kilowatts. But on a blistering summer late afternoon when demand peaks, the utility could limit use to 15 KW.

Elsewhere in the country, third parties such as Green Charge Networks and Greenlots are working with demand response and EV charging, and Duke Energy Corp. has evolved as a leader among utilities putting EVs and appliances in demand-response programs, said John Gartner, a director at Navigant Consulting.

While no other investor-owned utility has developed such a large network of EV chargers, others are also in the game and others will be soon, he said.

In a report last summer, the Edison Electric Institute said that in the face of slowing demand growth, “the electric utility industry needs the electrification of the transportation sector to remain viable and sustainable in the long term.”

Charles Fishman, an analyst at Morningstar, wouldn’t go that far. But, he said, if it helps KCP&L eke out some additional load growth in the long run, the initiative could prove worthwhile.

KCP&L said that it, not a third party, is best suited to own and operate a charging network in the Kansas City area and that a large-scale charging network could one day be utilized as a supply-side resource.

The utility plans to file papers with the Missouri Public Service Commission and Kansas Corporation Commission this week, including generic dockets to enable a broader conversation with consumer groups, commission staff and other parties about the costs and benefits.

“We think we’ll be able to show this is going to be environmentally beneficial and is going to have economic benefit,” Caisley said.

The discussions could parallel conversations going on in states like New York and Minnesota that are considering changes in the utility business model in an era of flat demand and increasing interest in distributed energy. The difference is that the conversations in Missouri and Kansas will revolve around concrete proposals, he said.

“This puts a stake in the ground,” Caisley said. “It asks for a conclusion.”