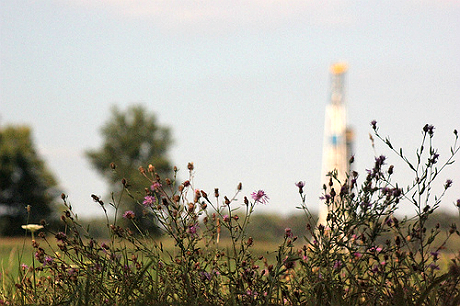 A Michigan township took careful steps this month to indirectly regulate oil and gas development within its borders — a legally tricky move amid growing public unrest and uncertainty over hydraulic fracturing here.

While townships and counties are preempted by state law on many aspects of oil and gas development, including hydraulic fracturing, they can focus on some ancillary activities of the practice and enforce police powers to give local residents some say.

One Traverse City-based group in particular, FLOW (For Love of Water), is on a sort of information and guidance tour, teaching communities what they can do through its Model Local Ordinance Program. The group is made up of a coalition of environmental groups around the state (FLOW is also a member of RE-AMP, which publishes Midwest Energy News).

Adopted by the township board earlier this month, the new rules involve construction of “accessory buildings,” which include more requirements for permits to build structures related to drilling exploration. Drilling processes also have to comply with the city’s lighting ordinance, which would require a variance for lighted structures taller than 25 feet. Finally, the township updated its “unwholesome substances” ordinance, allowing it to step into cleanup practices if a spill occurs.

The new rules “could potentially affect the scale or timing of the operation,” said FLOW Executive Director Liz Kirkwood. And the township reserves the right to seek an injunction against an operation if the rules are violated, said Cannon Township Supervisor Steve Grimm.

Since the state controls the issuance of permits for the drilling, completion and operation of wells, local governments around the state are still figuring out ways they can control issues like noise, traffic, water use or transporting hazardous chemicals. Cannon Township is one of the first areas in Michigan to add additional regulations, sources say.

The township issued a moratorium on oil and gas related activities — as other communities in Michigan have considered — in 2013, even though it has been roughly three decades since the area saw active drilling. After that, it considered input from FLOW, the oil and gas industry and the state Department of Environmental Quality.

“We came up with what we thought would clearly withstand a legal challenge,” Grimm said. “We’re not trying to interfere with or prevent the drilling process. The township does not have a position — we’re not against oil and gas exploration because the state says permitting is under their domain.

“And also, I personally believe in energy independence. I don’t like a lot of rules and regulations, but we have certain environmental issues in our township we have to preserve and protect. We think you can do both, you just have to be careful.”

Indeed, previous case law serves as the basis for what townships and counties can and can’t regulate before being preempted by the state. These limitations, however, do not apply to cities or villages.

According to a June article in the Michigan Bar Journal, “Michigan’s oil and gas regulations do not address many of the effects of fracking and its ancillary activities, facilities, and uses that would ordinarily be issues of local concern subject to local regulation.”

Ancillary activities not defined as an “operation” of a well, the article adds, might include “transportation of certain materials to and from the well pad, the use of roads other than the access road to the well pad, and regulation of ancillary storage tanks and other facilities. Local governments can likely place zoning regulations on water withdrawal wells and pipelines as long as they do not regulate the withdrawal quantity or the adverse effects on surface water regulated by the water withdrawal statute.”

The key is to avoid being “exclusionary,” said Adam Wygant, a supervisor of permits and technical services in the Department of Environmental Quality’s Office of Oil, Gas and Minerals.

“If you pass a zoning ordinance for a 40-ton oil and gas truck but then didn’t do the same thing for a cement truck or a home gas propane truck, then I think you run the risk of being exclusionary,” Wygant said.

About four years ago, Kirkwood and FLOW founder Jim Olson (both attorneys) started looking at ways in which local units of government could regulate fracking, which led to a report on “legal strategies for local communities,” Kirkwood said. It was difficult to draw on other states’ experiences, she added, due to legal nuances among states.

But what they have found, and what has been confirmed in the courts, is that townships here have the ability to regulate other aspects beyond the permitting of wells or well activity, such as noise pollution, truck traffic or air emissions — “All of the things that don’t necessarily seem like a big deal but are a big deal when this massive industrial pad is placed in the middle of a rural landscape or next to a residential community,” Kirkwood said.

That led to the idea of lending a hand to curious communities.

In other areas of the state, local governments (particularly in southeast Michigan) are quickly working on protective ordinances against future natural gas development.

For the oil and gas industry, though, a potential “patchwork” of local regulations is a concern, said John Griffin of the Associated Petroleum Industries of Michigan.

“What we’d like to see is uniformity,” Griffin said. “Hydrocarbons under the ground cross these borders, they don’t recognize the difference between townships. It’s better to have a consistent, uniform statewide program.”

How strong can they go?

It’s uncertain the extent to which these regulations could determine whether a developer decides to come to a certain area — especially in comparison to market forces like the price of oil or natural gas or the geological availability of the fuel.

Griffin is skeptical that FLOW is not trying to simply stop fracking throughout the state.

“When reading FLOW’s website, you’ll get a good idea that it’s a lot deeper than just trying to protect communities. It’s pretty clear to me that it’s about stopping oil and gas production as much as anything else,” he said. “What you have to do is properly balance the rights of nearby property owners and those who have oil and gas leasing rights.”

Kirkwood stresses that her group’s intent is not to effectively regulate fracking operations out of business.

“The intent is really to provide education about what fracking is, what are the risks and what are viable local legal strategies for communities to chart the kind of future they want,” she said. “It’s an intense use and it’s kind of a startling situation for a lot of these communities.”

Small townships also face the possibility of defending some of these rules in court.

“You never want to adopt an ordinance unless you’re prepared to defend it,” Kirkwood said.

Another challenge is local government navigating through new policies amid the slow pace of evolving federal and state policy, she added. The Michigan Department of Environmental Quality is in the midst of updating its rules related to fracking, including water withdrawals.

“It certainly would be beneficial for there to be a much more uniform and consistent practice (from the state and federal governments) to protect our waters, our most important resource,” she said.

Being the first township with these types of rules “I suppose is significant,” Grimm said, “On the other hand, someone has to be first. … My hope is that Cannon Township having done this will convince other townships and municipalities” to consider it as well.

Meanwhile, FLOW is heading north next, to Emmet County in the northwest Lower Peninsula, where it started presentations for local officials and residents this week. The group also plans to work with townships in northern, central and west Michigan.