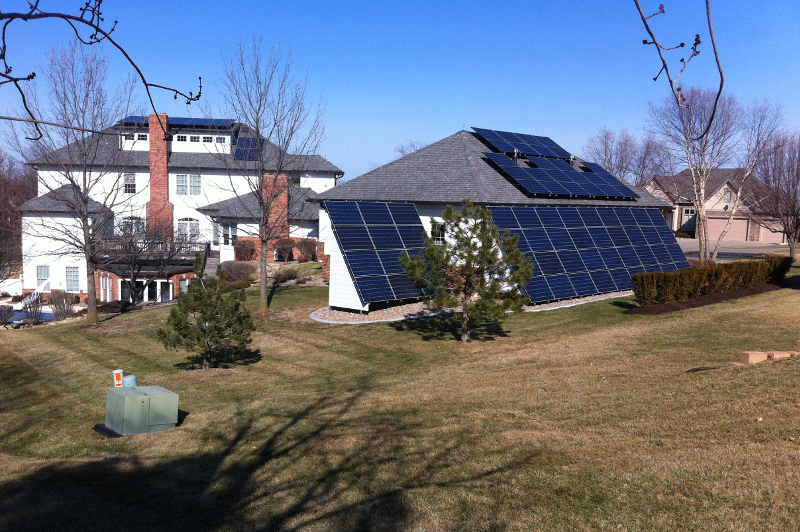 Scott and Stacey Hausman's solar array in St. Joseph, Missouri is the subject of a dispute with their homeowners association. (courtesy photo)

Bills pending before the Missouri General Assembly would prohibit homeowners associations from imposing standards that, in many cases, effectively prevent the installation of solar panels on homes.

And in communities throughout Missouri, homeowners have been butting heads with homeowner associations (HOAs) and municipalities that have attempted to impose such restrictions, leading to lawsuits and the removal of solar panels.

“I think the number is growing and it’s become a critical issue to address,” said Heidi Schoen, executive director of the Missouri Solar Energy Industries Association. “It’s discouraging people from putting solar up. I get a lot of calls from frustrated homeowners who want to know how this could happen.”

“We’ve had multiple court battles where HOAs have stopped solar panels from being installed,” said Sen. Jason Holsman, who introduced bills both this session and last year asserting the rights of homeowners to install solar panels.

“HOAs just don’t like the look of them, or don’t believe in climate change, or for whatever reason have chosen to bar the solar panels,” he said.

In truth, it’s a question of where they’re placed, said John Burns, an attorney representing a homeowners association in a long-running case in St. Joseph. “They are very ugly. You can hardly think they are okay if you look at ’em.”

The dispute involves Scott and Stacey Hausman, who put up a 23-kilowatt system at their home in St. Joseph. The panels are roughly evenly divided between those on the ground and those on the roof.

The ground mounts, Burns said, are “right in your face. It’s not that (other homeowners in the development) don’t believe alternative energy sources are important. But we don’t want them placed in positions where they are necessarily visible from the street.”

A circuit court judge in early January told the Hausmans they must remove the ground-mounted panels by April 1, and must pay the homeowners’ association $38,500. Scott Hausman said he intends to persevere in the case, and very likely will file an appeal.

He initially aroused the association’s ire by not complying with its requirement that homeowners obtain the assent of the design review committee before making any substantial alterations to a property.

As a member of the committee a couple years ago, Hausman shared his plans with the committee informally. When they expressed dismay, he decided not to seek their approval through the required formal channel, since he was confident his proposal would be rejected.

Also, the association had no standards regarding solar panels at the time. Hausman believed that solar standards would be approved at some higher level – whether city or state – and likely would supercede any ruling by the association.

Being in a hurry to snag a rebate from his local utility before it phased them out, Hausman proceeded without the committee’s approval and had the panels installed in June 2012 at his house, which sprawls over more than 12,000 square feet.

The association’s standards would permit them in a back yard, not a side yard. Hausman and the homeowners association disagree as to whether his ground-mounted panels – the ones still in dispute – are in fact in the back yard or the side yard of his house. It’s not an easy call, since his house actually faces a corner.

“I guess it’s just a stigma, from an aesthetic point of view,” Schoen said. “I look at (solar panels) and think, ‘That’s so cool.’ But we don’t all value the same things.”

Solar panels have been in the crosshairs of more than a dozen disputes in Missouri, with complaints brought by homeowners associations in some cases, municipalities in others. Frances and James Babb, who live outside of St. Louis, have been entangled in conflicts first with the City of Clarkson Valley, and now with their homeowners association.

In the summer of 2012, the Babbs won their litigation with the city before a circuit court and were allowed to keep their 25-kilowatt system, which is about evenly split between roof and ground-mounted panels.

The current saga commenced last October, when the Babbs’ homeowners association filed a lawsuit against them, claiming that they violated their contract with the association. As required, the Babbs got the association’s approval to put 100 solar panels on the roof of their home.

To meet aesthetic concerns of some neighbors, as well as fire-safety concerns of the city, the Babbs filed a revised plan in February 2012 for the ground-mounted panels. Although the homeowners association rules require that it render a decision within 30 days, the association told the Babbs it needed more time to arrive at a decision. The Babbs had the system installed that summer.

The dispute now centers over whether the association rendered a judgment on the panels within the time allowed. Also, the Babbs contend that the lawsuit is baseless because it was filed after the two-year status of limitations elapsed.

Frances Babb has pushed hard for state legislation that would guarantee homeowners the right to install solar panels. Although the bill didn’t go far a year ago, when a pertinent committee was headed by someone hostile to solar energy, according to Holsman, he said the committee environment now is friendlier to renewable energy.

Whatever the outcome in the Missouri statehouse, homeowner association attorney John Burns sounded weary as he issued his prediction.

“This has been a war since day one,” he said. “I expect them to take it all the way to the end.”