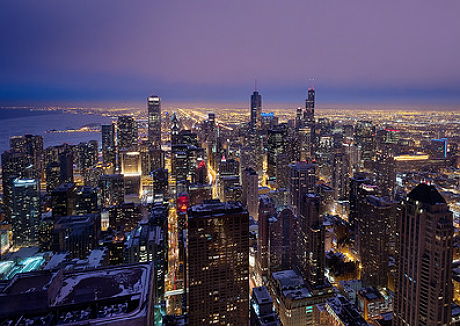 Leading investors in Chicago strongly favor government investment in energy efficiency and renewable energy, and they see the clean energy sector as a good personal investment, according to a survey released recently by Morgan Stanley.

The top concerns for Chicago investors in making their own investments were rate of return, past performance of stocks and diversification of portfolio. After that, environmental impact, carbon footprint and social impact of energy investments were also considered important.

But when it comes to taking action in their households, Chicago investors were less enthusiastic.

Between 11 and 15 percent said they would look at installing geothermal, wind or solar systems. A third said they would install better insulation for increased energy efficiency, and fewer than half said they’d buy more efficient appliances or a fuel-efficient vehicle. About two-thirds of respondents said they would get better at turning off lights, replacing inefficient light bulbs and recycling.

“Are you putting a wind farm in your backyard? No. Are you investing in wind or solar? No, it’s too risky,” he said. “What they think the country should do versus what they plan to do might have nothing in common. But it tells you a lot about what they believe, what’s important to them.”

Age could make a bigger difference than beliefs in determining actual energy investments, Esposito said. Older people generally look for less risky investments with better short-term outlooks. And even though natural gas prices are notoriously volatile and oil prices have plummeted, many people still see those fuels as more stable investments than renewables.

“If you are 80 or 65 years old, the odds of investing a large part of your portfolio in a wind farm are pretty small,” said Esposito. “If you’re 27, you’re more inclined to invest in a wind farm than someone who’s 70. As the population gets older, money is more in the hands of older people, inclined to take less risk with their money.”

In energy like almost any sector, subjective perceptions drive investors’ choices and the market as a whole. Esposito said that in his three decades as a wealth manager, “I’ve seen dramatic changes in everything.”

“I remember in the 1980’s we were going to run out of oil,” he said. “Then by 1999…you could buy a gallon of oil cheaper than a gallon of water. Just six years ago we were told oil was going to $300 a barrel and we would run out. Now we have so much oil we don’t know what to do with it. That’s where a seasoned wealth manager comes into play – you don’t want to get caught up in extremes.”

Investors might want to pick up stock in oil-related companies while prices are low, assuming they will rebound, he said. And investing in industries that benefit from cheap oil could also be a good bet. But overall Esposito doesn’t see much confidence in the energy sector among his clients. “You’re in an environment where investors are more nervous than they’ve ever been,” he said. “You’d be surprised how much psychology plays a role in the markets.”

The survey showed significant differences in men’s and women’s opinions on climate change and on renewable energy. “Support for wind farms is significantly stronger among women (92%) than men (74%), while more men than women support development of the Keystone Pipeline (75% vs. 47%) and fracking (55% vs. 21%),” the survey said. “More women (90%) than men (55%) would opt to expand production of alternative energies; more men (31%) than women (6%) suggest expanding traditional energies.”

From a financial standpoint, interest in renewables and efficiency is typically higher when gas and oil prices are high. Esposito said the strong support was somewhat surprising given oil prices were dropping last fall. With oil prices at record lows now, Esposito thinks the Morgan Stanley survey in the second quarter of 2015 may show reduced support for alternative energy and efficiency.

“My guess is you could see a dramatic difference in those polls in the second quarter,” he said. “We’ll see.”