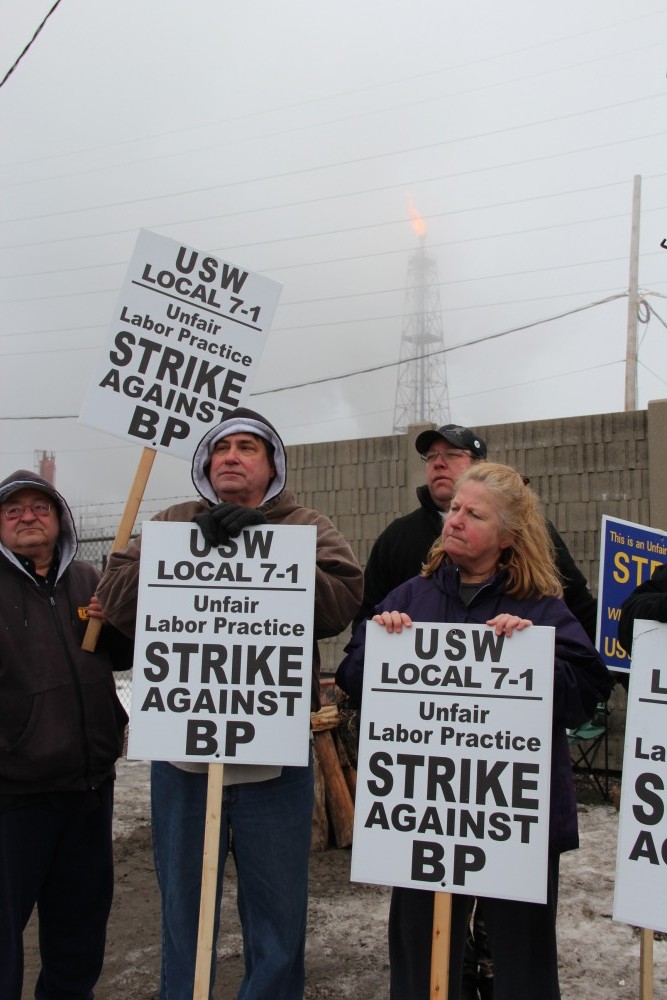 The towering machinery and fiery flares of the BP oil refinery in Whiting, Indiana were largely obscured by a cold fog Sunday morning, as refinery workers clustered around barrels of burning wood and held picket signs at 10 different spots around the sprawling perimeter.

About 1,100 members of the United Steelworkers (USW) Local 7-1 – more than half the refinery employees – went on strike at 12:01 am Sunday, joining a nationwide strike of USW refinery workers negotiating a national contract with the industry.

USW Local 7-1 president Dave Danko told reporters that contract negotiations broke off Friday, though they still hope to return to the bargaining table next week. He said that wages are not a contested issue, but rather the union is concerned about “understaffing,” excessive amounts of overtime work, and reliance on outside contractors who he said are not as familiar as they should be with the plant.

The USW’s nationwide strike against the oil industry began February 1 and now includes about 5,000 workers at 11 refineries in Indiana, Ohio, Kentucky, California, Texas and Washington. The strike is over unfair labor practices charges regarding safety and staffing as well as cuts to healthcare benefits. Shell is the lead industry player in the negotiations, which are currently stalled over a union request for information.

Danko described the nationwide strike as a “wake up call to the industry.” He noted that the Whiting refinery has been operating for more than 100 years, the last strike was in 1980. Individual workers declined to speak with reporters.

On Sunday about 340 USW members also went on strike at a Toledo refinery that BP owns jointly with the Canadian company Husky Energy. In a statement, BP spokesman Scott Dean said: “The company now is operating the facilities with replacement workers comprised primarily of current and former BP employees who have been trained to the same legally required and BP-mandated standards as regular workers. We believe this approach ensures the safety of our employees and fulfills the needs of our customers until contract agreements are reached.”

It’s not clear how long the strike could stretch on. On Sunday at the Steelworkers union hall near the Whiting refinery, union members were constructing temporary movable shelters to protect picketers from the elements. Trucks and cars passing the clusters of strikers honked as workers pumped their fists. A large inflatable rat, a fixture at strikes, swayed in the breeze on Indianapolis Blvd. in front of the refinery, which recently completed a nearly $4 billion expansion to process more Canadian tar sands oil.

While support for BP in the Whiting community is generally strong, the region is also a long-time labor union stronghold.

“Northwest Indiana is a blue-collar neighborhood,” said Danko. “Our folks here are proud union workers…who are committed to withhold our work” until a satisfactory contract is reached.