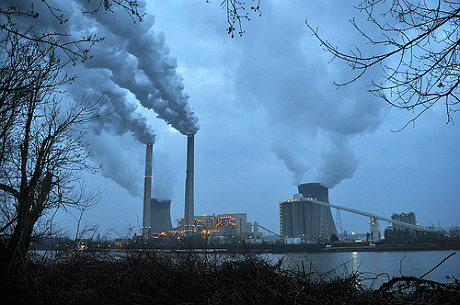 Ohio EPA Director Craig Butler testified before the Energy Mandates Study Committee formed as a result of a 2014 law that froze and scaled back the state’s renewable energy and energy efficiency standards. Also testifying last Thursday was Asim Haque, Vice-Chairman of the Public Utilities Commission of Ohio (PUCO).

Senate Bill 310 directs the committee to consider the costs and benefits of Ohio’s renewable energy and energy efficiency standards and to recommend whether any additional changes should be made.

A previous analysis by the Natural Resources Defense Council proposed how Ohio’s energy efficiency and renewable energy standards could get the state most of the way towards meeting forthcoming federal targets for lower carbon emissions from power plants.

Both Haque and Butler objected strongly to the EPA’s proposed rules.

Butler organized his comments around four main compliance strategies from the federal plan. “Since each of these strategies operates somewhat independently, we will call each of these measures ‘buckets,’” he told the committee.

“Bucket 1” was increased efficiency from existing power plants. “To expect an additional 4-6% efficiency improvement on a per-plant basis is extremely unrealistic,” Butler opined.

“Bucket 2” was increased reliance on natural gas power generators. That route would create “undue strain on both the natural gas and electrical distribution and transmission systems,” Butler said.

“As for the increases in renewable energy and energy efficiency under Buckets 3 and 4, remember that U.S. EPA’s primary objective is to reduce coal-burning power plants operating at current levels,” Butler said.

Butler noted that there are still a variety of “unanswered questions” about renewable energy and energy efficiency as well.

Some of those questions are related to changes made by SB 310. Among other things, SB 310 eliminated any in-state requirement for most forms of renewable energy. Ohio law now also counts many more things toward compliance with the energy efficiency standard.

Despite the stated uncertainty, Butler noted that “incompatibility between Ohio-based programs and what is acceptable to U.S. EPA are fully expected.”

Butler concluded that neither the PUCO nor Ohio EPA could give “any type of realistic projections” of how far the standards would go towards meeting new federal requirements. Nonetheless, he added, “any compliance estimates should be viewed with a level of skepticism.”

Butler’s testimony did not address whether restoring Ohio’s clean energy standards to their pre-SB 310 versions might be more acceptable to the EPA. Nor did it identify any environmental downsides to either renewable energy or energy efficiency.

Haque’s testimony characterized the compliance strategies under the Clean Power Plan as “building blocks” instead of buckets. Yet he, too, was highly critical of the plan.

Focusing particularly on “building block 2” and its increased reliance on natural gas generation, Haque claimed the plan “would cause wholesale energy market prices to be 39 percent higher in calendar year 2025.”

Turning to renewable energy and energy efficiency, Haque noted the EPA did not “appropriately represent Ohio law” in its calculations. Presumably that was because the federal agency relied on the pre-SB 310 version that existed when the rules were proposed.

“Finally, there are grid reliability concerns associated with each of these building blocks,” Haque added. For support, he referred to a November 2014 report from the North American Electric Reliability Corporation (NERC).

“The NERC analysis is flawed,” said Moore. “Among other weaknesses, their first, preliminary report failed to account for the proven value of renewable energy and energy efficiency.”

“Last year PJM found that the regional grid could support far higher use of wind and solar power [30% of total power generation], with no reliability issues of consequence, all while saving billions of dollars in avoided coal and natural gas fuel costs,” Moore explained. Looking at all compliance options, rather than “artificially forcing a massive shift” to gas “would have found far lower costs.”

“We’d welcome an analysis from the agencies that incorporates greater levels of efficiency and renewables,” said Samantha Williams, an attorney with NRDC. “NRDC found that Ohio can get far down the road to the 2030 target using its clean energy standards—without the need to rush to natural gas. With a more diverse compliance mix, these costs are unlikely to materialize.”

Both Butler and Haque criticized the Clean Power Plan for encouraging a shift away from coal. Yet neither estimated the costs to the state from continued reliance on coal.

Butler noted that economic and health projections are “difficult” and said the agency was “unable to provide any validity or credibility to U.S. EPA’s projections.” He refrained from detailing potential impacts from climate change or describing different types of pollution associated with coal.

A 2011 study by public health experts at Harvard and elsewhere found that including the full cost of damages from coal and its waste streams would double or triple the price of electricity from coal. That would make wind, solar and other forms of nonfossil fuel power competitive with coal, the study authors noted.

“To the extent that the committee has a responsibility to look out for what’s best for Ohio, then yes, you should consider what are all the benefits and all the costs that are associated from different paths,” noted Martin Kushler of the American Council for an Energy-Efficient Economy.

Nonetheless, extra environmental and health benefits are like “frosting on the cake” when it comes to energy efficiency, Kushler stressed.

When it comes to different types of energy resources, there’s “one clear winner,” Kushler said. “Energy efficiency programs in Ohio—not to mention everywhere else in the country where we’ve looked at this–are totally cost-effective and save ratepayers hundreds of millions of dollars.”

Nor should legislators or regulators let objections to federal rules make them lose sight of energy efficiency’s benefits, he added. “We want them to do the cheapest resource, which is energy efficiency.”

“We’re not asking anybody to spend extra money that wouldn’t otherwise be justified,” Kushler added.

The Natural Resources Defense Council and American Council for an Energy-Efficient Economy are members of RE-AMP, which publishes Midwest Energy News.