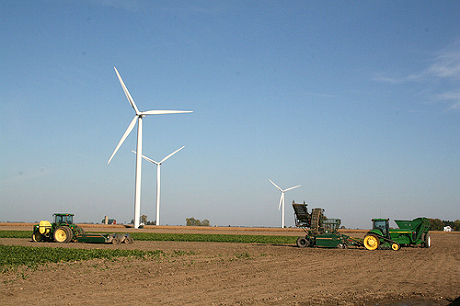 Correction: This story has been updated to say that two wind farm projects in Gratiot County are separately owned by Invenergy and DTE.

Officials in Michigan’s “wind capital” in the eastern Lower Peninsula are struggling to tighten planning rules and are considering halting further wind development to stop an industry that critics say has faced lax regulation there.

It’s also another example of how wind energy’s growth has divided residents when economic and clean-energy benefits meet zoning and noise complaints, though wind supporters say those complaints come from a vocal few.

But even some supporters of wind energy question whether Huron County — the hub of Michigan’s wind development with over 300 turbines in the state’s Thumb region — has reached its saturation point for wind turbines.

“The ordinances we’re currently operating under are inadequate to protect the jewel of Huron County — its shoreline,” said John Nugent, chairman of the Huron County Board of Commissioners. “It’s because the county is becoming saturated.”

He added that one project in particular, Minnesota-based Geronimo Energy’s 100 MW Apple Blossom Wind Farm, is drawing attention for reportedly seeking to build nine turbines within three miles of the shoreline. The U.S. Fish and Wildlife Service has recommended a three-mile setback for wind projects.

A Geronimo spokesman told the Detroit News recently that an ordinance prohibiting building within that distance “would be an issue for us.”

“It’s really multifaceted,” Nugent said. “There’s not an easy solution. It’s a very lengthy process to revise an ordinance. I brought up: Why not a moratorium until that is done? What we’re trying to do is find a middle ground — everyone has to give a little and get a little. We don’t want to destroy the development.”

But as most of the complaints are directed at project developers, Nugent said, the issues are rooted in a lack of initial planning.

“If it were better understood what requirements should be for siting wind turbines when this began, we wouldn’t be in the trouble we are,” he said. “Because the ordinance is so lax, it allowed development that should have never occurred. But hindsight is 20/20 and we are trying to correct it now. We have had a very open dialogue. I think we will succeed eventually.”

Meanwhile, the county is contending property tax revenues from the turbines with the Michigan Tax Commission, further complicating the benefits of more development. Officials say local communities have lost out on $28 million in tax revenue due to the drop in depreciation levels from the tax commission’s formula.

“Huron County, in conjunction with other areas, has spent over a half million dollars just to get the tax money we were promised,” Nugent said.

As for solutions, some say county-level regulations — as opposed to a statewide policy — may be the most likely to address these concerns. The fear is that statewide siting rules may be too uniform and not consider local regions. Shoreline communities along the Great Lakes may have different goals compared to, say, rural mid-Michigan farming regions.

“It would be very difficult for the state to enact (rules) that are protective of everyone,” Nugent said.

The county’s ordinance for wind overlay districts has setbacks based on the height of the turbine as well as noise levels. That ordinance has already been amended once, said Huron County Commissioner Dave Peruski.

And when drafting uniform state statutes on wind development, as there are for the oil and gas industry here, “Then you run into the argument that the state is controlling this activity and local communities are preempted from adopting any other regulations because the state is regulating it so you don’t get to,” said attorney Ross Hammersly, who specializes in environmental and land use litigation in Traverse City.

Yet wind advocates in other states say that statewide rules that also involve local input on a case-by-case basis are a way to bypass local politics that could prevent development.

In Wisconsin, stakeholders spent three years crafting a state law that took effect in 2011, which includes a 1,250-foot setback from non-participating landowners.

Last year, Republican state Sen. Howard Walker from Traverse City proposed a law that would exempt wind farms from nuisance complaints if they comply with local ordinances on setback and noise.

A companion bill included having the Public Service Commission adopt guidelines for where to site wind development based on work published by Michigan State University Extension.

The Legislature did not take action on the bills before the end of last session.

Nugent agrees that maybe the state should at least have rules about building near Great Lakes coastline or banning them from the lakes.

Two Huron County townships in particular, Paris and Lake, have ordinances “that would in essence make it so difficult, so impossible to place wind turbines there,” Nugent said, including setbacks closer to 2,000 feet. Other townships are looking to the county for guidance.

Hammersly said depending on the ordinance, local units of government can create “exclusionary zoning” in which a business is not allowed anywhere in an area.

“You have to allow them, the question is where,” Hammersly said. “You don’t want those encroaching that are sensitive in nature.”

As it relates to setbacks or restrictions on height and noise on turbines, “You probably want them in more rural and remote areas, probably where they are able to site a large number of these turbines. Communities themselves are going to have to look at things like noise, height and the best suited areas that would be appropriate for this sort of thing.”

But as for health effects — “One of the difficult things when you’re suing based on nuisance is that you have to be able to prove that the adverse health effects you’re suffering are directly linked to the person you’re suing,” Hammersly said. “Usually in a lawsuit that’s a difficult burden to satisfy. You need a lot of proof from physicians and other experts who can link directly your health problems with the wind turbine that’s nearby.”

And such connections have not been documented, though studies have shown a connection between wind turbines and annoyance, which could lead to stress-related symptoms.

“I think it’s important the state get much more energy from renewable sources like wind and solar,” Hammersly said, “but at the same time, you don’t want communities to feel like they’re being railroaded and forced to allow something that they’re not 100 percent educated upon.”

Lessons from around the state

Rich Vander Veen is a Marquette-based energy developer who was involved in the early stages of what became two wind projects totaling 212.6 MW in Gratiot County, separately owned by Invenergy and DTE. The wind farms are largely seen as a model for how to get wide community buy-in for wind by getting consensus among landowners and local officials.

Vander Veen said that making sure residents understand “the fundamentals of electric literacy is so important. If they do, the changes are greater, then they say: ‘I should be part of this process, too.'”

Hammersly said it’s an “interesting approach” that utilities in particular take when they work closely with communities.

“When you’ve had the big utilities in the state that have normally gotten their way when putting energy facilities where they want to, it’s an interesting transition now where they’re doing a lot more in different communities than they have in the past,” he said. “I think it’s vital.”

A representative of Geronimo Energy said at an event last month that the company “believes in engaging all of the stakeholders participating in a lease. There is no better way to solidify the community than to get all parties involved and set up a community foundation for those who don’t see direct monetary benefits. We as developers take complaints seriously.”

But not all communities can say the same as those in Gratiot County.

In Benzie County in northwest Lower Michigan, angry residents contributed to Duke Energy’s withdrawing plans for a project calling for dozens of turbines. Local officials had been recalled in elections for supporting the wind industry. And wind opponents turned to building helicopter pads as a way to stop construction of nearby wind turbines, which have a setback distance of nearly a mile.

Farther south along the Lake Michigan coastline, residents in Mason County challenged Consumers Energy’s 56-turbine,100 MW Lake Winds Energy Park in court over alleged health impacts. On the eve of trial in October, plaintiffs had settled with the utility out of court.

Additionally, Consumers Energy is in an ongoing lawsuit against the county over whether Lake Winds is out of compliance with the county’s noise ordinance. A circuit court sided with the county and the case is still under appeal.

As of December, county planning officials were still discussing changes to local policy.

Jim Byrum, president of the Michigan Agribusiness Association, said during an event last month sponsored by the American Wind Energy Association: “All politics is local, and we’ve seen some challenges in the countryside. Messaging is absolutely critical — having a concise, clear, simple message locals can understand. Those that complain tend to be those who are not stakeholders.

“Overcoming those objections will be critical. I can’t stress enough that local benefits is an extraordinarily powerful message.”

Brandon Hofmeister, executive director of policy research and analysis with Consumers Energy, grew up in Huron County and worked on the state’s Renewable Portfolio Standard (RPS). During the same forum where Byrum spoke, he said, “I do start to wonder if we’re hitting that saturation point.”

Nonetheless, more turbines are coming in the Thumb. RES Americas recently entered into a power purchase agreement for a 114 MW Deerfield project, which is due online in 2016. It’s near the 53 MW Harvest project, the state’s first commercial-scale wind farm, which came online in 2007. The number could reportedly reach 1,000.

Statewide, the industry continues to see growth. According to a recent report by the American Wind Energy Association, Michigan ranked fourth in the nation in the amount of wind capacity added last year.

It’s unclear whether that growth will be maintained as state legislators revisit Michigan’s 10 percent renewable portfolio standard that expires at the end of the year. Clean-energy supporters hope for an expanded RPS, while prominent Republicans in the Legislature have given initial support for a new “clean-energy standard” that would include natural gas.

The Thumb accounts for about half of the installed 1.4 GW wind capacity in Michigan, with some of the best suited land for harvesting wind in the state. Recent research from the University of Michigan surveyed residents around the state on wind turbines in their community. The report showed that support increases in communities where turbines have been installed.