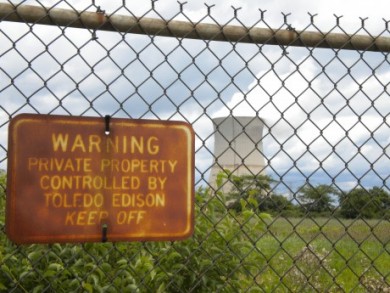 The Davis-Besse Nuclear Power Station at Oak Harbor, Ohio, would have a guaranteed buyer for all its output if the PUCO approves a FirstEnergy plan. Photo by Kathiann M. Kowalski.

Papers filed last week by FirstEnergy in one of Ohio’s utility “bailout” cases suggest how approval of the plans could potentially give companies an edge in upcoming capacity auctions for the PJM grid area.

The proposals could mean more profits for utilities and their affiliated coal and nuclear plants. It could also mean problems for competitors, including natural gas generation, wind energy, solar power and alternative retail electric suppliers.

The cases before the Public Utilities Commission of Ohio (PUCO) involve long-term contracts for regulated utilities to buy all the output from particular affiliated power plants. All ratepayers in the service territory would pay or benefit from the difference between the going competitive market price for power and the contract price.

Last week FirstEnergy pressed the PUCO to deny a scheduling extension so it could get a final ruling before PJM’s Base Residual Auction in May. “This timing would allow the companies to effectuate the outcome of the commission’s decision in this proceeding in a reasonable manner,” said FirstEnergy’s brief.

The timing mattered because it would determine which FirstEnergy subsidiary would bid particular plants’ power into this year’s auction—its regulated utilities or its competitive generation company, FirstEnergy Solutions, explained FirstEnergy spokesperson Jennifer Young.

“Since the motion has already been granted to extend the timeline for the case, our opposition is moot,” Young said.

Nonetheless, the proposed deals between utilities and their affiliates extend well beyond the period covered by this year’s auction. Thus, utilities, competitors and consumers continue to have a stake in how the PUCO’s decisions could affect competition in the PJM capacity market.

FirstEnergy’s plan would guarantee sales for all electricity produced by the Davis-Besse nuclear station, the W.H. Sammis coal plant, and FirstEnergy’s share of two additional coal plants. American Electric Power and Duke Energy have asked the PUCO to approve similar plans for some of their own distribution affiliates’ coal plants.

A decision is expected in the AEP case this month. The evidentiary hearing for FirstEnergy’s case is now set for April 13.

The utilities have argued that the plans would provide stability in retail electricity prices and benefit consumers in a volatile energy market.

Consumer and environmental advocates say the plans would violate both federal and state law and cost ratepayers billions of dollars. The Office of the Ohio Consumers’ Counsel estimates the losses could ultimately exceed $3 billion.

A January 30 analysis by Policy Matters Ohio concluded that the plans’ “dirty energy subsidies” would be a “bad deal” for consumers.

The charges under each plan would be “non-bypassable,” explained researcher Michael Shields at Policy Matters Ohio. Even if they choose another generation company, ratepayers would still have to pay for the deal with their utility’s affiliate. They would not get a choice about whether their dollars support utilities’ affiliated plants, he said.

Critics say competitors could also be harmed if the plans were approved.

Ohio law requires the PUCO to ensure competition in the retail electric service market. Utilities argue that customers could continue to select their generation providers. Critics say that right would be largely meaningless if the plans force all ratepayers to cover costs for the utilities’ affiliates, regardless of the customer’s wishes.

And if customers have to pay extra charges in any case, they would see less reason “to opt into a more efficient producer,” Shields said. As a result, competing electric retail suppliers could find it harder to attract customers.

The plans’ long-term contracts might affect the PJM capacity market too. Each year’s auction decides which supply sources will get payments to ensure the grid area has enough generation capacity to meet peak demand three years down the road.

FirstEnergy and many other utilities do not disclose which of their power plants clear the capacity auction, and PJM does not make that information publicly available either. However, FirstEnergy has previously expressed concern about making sure that “iron-in-the-ground hard assets” like coal and nuclear plants have their costs covered.

FirstEnergy, AEP and Duke have likewise not publicly disclosed all the financial details of the proposed power purchase agreements between their Ohio utilities and their unregulated generation affiliates.

If the deals were approved, any payments for the covered plants that result from the capacity auction would presumably be offset against any amounts collected from ratepayers.

And if the timing of approval matters, then presumably a decision could affect how companies determine the price at which they will offer megawatts into the auction.

If some plants will have all costs paid in any case, owners are more likely to offer their megawatts into the capacity auction at lower prices. PJM rules require a minimum price for some new sources of electricity generation. As a general rule, though, existing sources have far more leeway.

Those sources could “offer in at zero because they know the auction will clear at a higher price,” PJM Interconnection spokesperson Ray Dotter said. The final clearing price “is determined by the cost of the last megawatt that’s accepted.”

That could leave other companies’ plants “crowded out” of the capacity market, even if their overhead costs were less than those whose costs are already covered, noted a spokesperson for PJM Power Providers Group (P3), whose members compete with FirstEnergy and other utilities. The spokesperson asked that his comments be attributed to the group as a whole, rather than to him as an individual.

“Our group has always stood for the proposition that wholesale markets should be properly designed and well-functioning. And in order to have that, you need a level playing field,” he stressed.

“You just don’t have fair competition when you have to compete against somebody with such a complete subsidy,” he added.

Advocates say the market impacts would be bad news for consumers too.

The “bailout” plans are “counterproductive,” Shields explained. Utility plans “would incentivize waste because families and businesses throughout much of the state would be on the hook for all of the operating costs.”

“Where’s the incentive for them to operate efficiently?” asked Dan Sawmiller of the Sierra Club’s Beyond Coal campaign.

At the same time, Sawmiller noted, FirstEnergy has challenged the inclusion of demand response resources in the PJM auction. PUCO decisions and cutbacks as a result of Senate Bill 310 make it unlikely that FirstEnergy will offer planned energy efficiency into the auction either, he added.

“That’s going to have the effect of artificially increasing capacity prices to meet demand that we are also spending money in the state to avoid,” Sawmiller said. “So, we’re paying to avoid that demand, but then we’re being asked to pay for that demand anyway. And now we’re being asked [through the “bailout” case] to meet that demand with uneconomic power plants.”

“All of this benefits FirstEnergy,” Sawmiller concluded. “And all of this harms the consumer.”

Policy Matters Ohio and the Sierra Club are members of RE-AMP, which publishes Midwest Energy News.